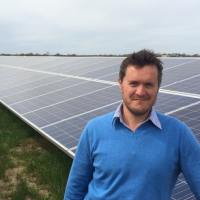 Drones are increasingly in the public eye but contrary to reports in the mainstream press, there are many more uses for a drone than just spying on the neighbours and making illicit drops to prisoners.

What many members of the public aren’t aware of, is the growing and highly effective use of drones in a number of high profile industries – the solar sector being one of them.

The fact that it’s now possible to control a relatively cheap aerial vehicle that allows you to access areas previously out of reach due to location, cost or scale opens up huge potential to address key industry dilemmas. The fact that this aerial vehicle can carry payload ranging from sensors and cameras to parcels increases that potential massively, and makes for an exciting proposition for those with the foresight and the ingenuity to harness it.

Within the solar sector there has always been the need to get above a large scale array to record key imagery and data but, in the absence of being able to justify chartering a helicopter, the industry has developed processes and procedures to fill the gap of data collection. None, however, have been ideal.

Within the UK solar sector drones have been used in an increasing capacity over the past couple of years. Push Energy started using drones back in 2014 for construction monitoring to great effect. During the stages of solar plant construction, drones are used to collect high resolution aerial imagery for status reporting, monitoring, problem solving and stakeholder engagement. The imagery has become so relied upon that some milestone payments are made during construction based on the imagery rather than a site visit from the funder. It is also incredibly helpful in keeping the projects ‘real’ in the eyes of those working on the project, but never visiting the site.

So it is therefore not surprising that the past couple of years have seen a flurry of new entrants to the drone market. These range from hobbyists - have drone, will fly for money - to existing inspection and surveying companies who recognise the value a drone can bring to their offering. In the solar sector, one or two O&M companies have also trialled drones to enhance their service offerings.

But is there enough value to the client? Simply flying a drone above a solar asset and taking interesting images may grab the client’s attention initially (and some of the footage can be pretty spectacular) but when push comes to shove, it doesn’t add quantifiable value to their business.

The full version of this article appears in Issue 1 of Inside Clean Energy magazine. Fill out the form below to download the entire issue for free.