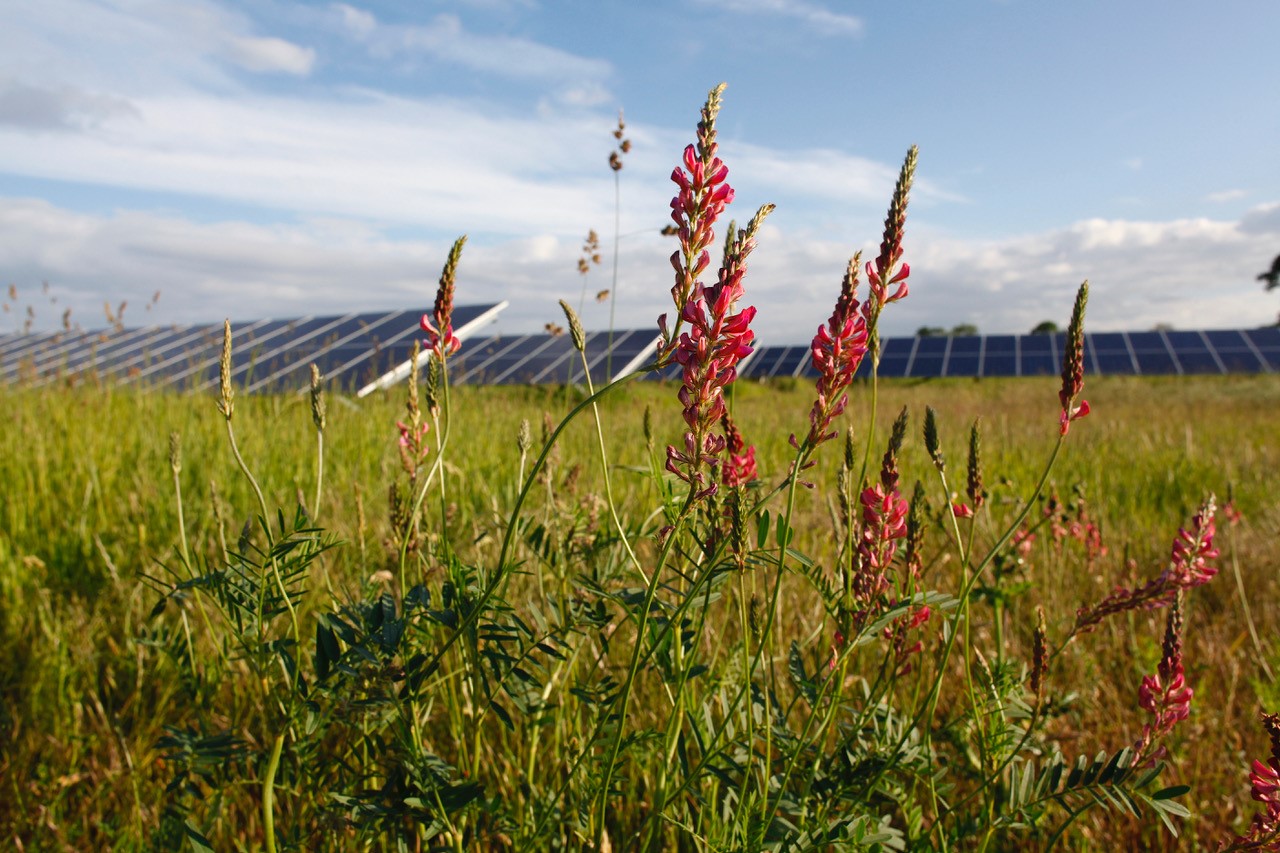 Only 0.4% of land in the UK is needed to meet the government’s 70GW solar target. Image: Eden Renewables.

The economic impacts of Russia’s invasion of Ukraine are being felt around the world. This is especially true in the energy and food markets whose supply chains depend on both countries. The crisis has reinvigorated a long-running debate about land use for solar farms, increasingly polarised around energy versus food security.

Gas provides 40% of the UK’s electricity generation, over half of which is imported. Global constraints on gas supplies caused by the Ukraine war have contributed to the huge spike in energy prices which affects every household, with some 40% of British homes facing fuel poverty this winter, according to E.ON UK. It highlights the vital importance of energy security and the need to maximise the amount of energy we generate here in the UK. If we are also to meet our climate change targets while keeping costs down, that energy needs to be renewable.

Solar, now subsidy-free, has become one of the lowest cost energy-generating technologies at around a third of the cost of gas or nuclear, with rapid deployment: potentially within months of receiving planning consent a solar farm will begin generating  clean power, contributing to lower energy prices across the board.

Equally concerning is food security. The war affects other commodity costs such as wheat, sunflower oil and fertiliser which is increasing  prices at supermarket tills. The double whammy of rising energy and food prices is causing a cost-of-living crisis with inflation reaching levels that have not been seen since the 1980s.

The overwhelming majority (over 80%) of the public supports solar developments both in principle and in their area. However, a small but vocal minority of backbench MPs, parish councils and neighbours to prospective solar farms are opposing new developments on the grounds that they result in the loss of productive agricultural land which should be prioritised for food production given the current crisis. This is a false narrative designed to create fear.

Solar farms are typically developed on land of poor or moderate quality – classified as Grades 3b and below in the Natural England/DEFRA Agricultural Land Classification; they rarely result in the loss of ‘Best and Most Versatile Land’ (BMV), which is 3a and above.

Government Planning Practice Guidance is clear that solar development on agricultural land is acceptable where “poor quality land is used in preference to high quality land” and developments allow for “continued agricultural use and or biodiversity enhancements”.

Solar farms disturb less than 2% of the underlying land and are completely reversible. They can be removed quickly and the land returned to food production at the end of their life. The land will have benefited from a break in intensive cultivation, improved soil health and increased carbon sequestration. 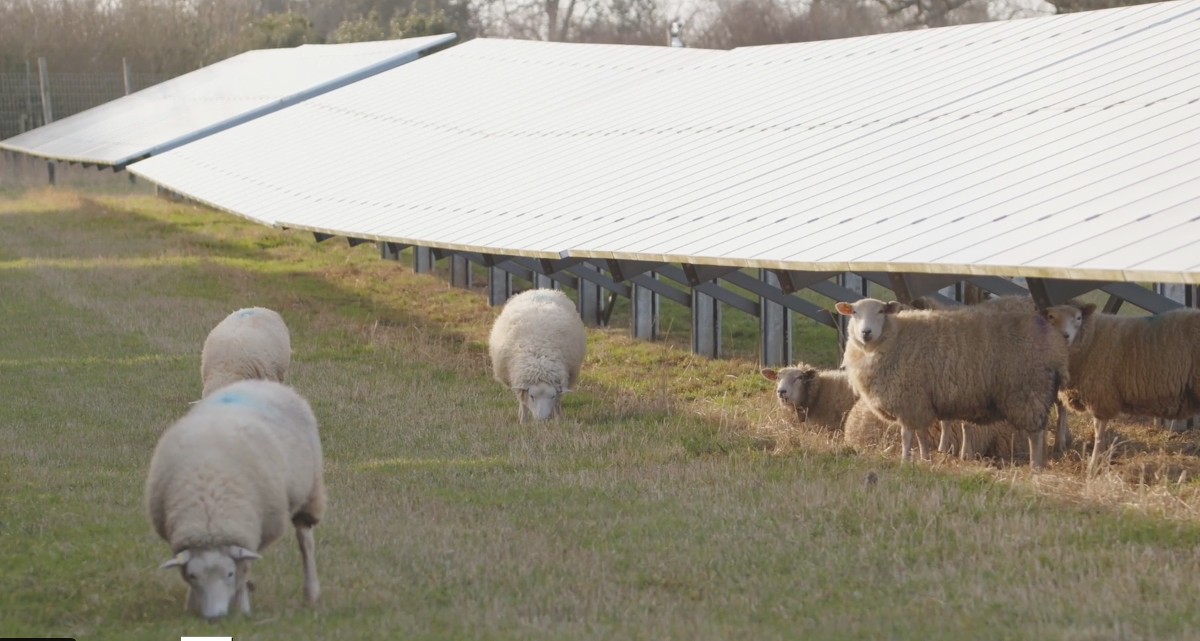 Farmers currently face huge challenges such as increasing regulation, fluctuating incomes, and not least, the impacts of climate change. If we want them to continue producing food sustainably in the future they need to diversify. For many landowners leasing a small proportion of their land for a solar farm will ensure the future of their farm for the next generations.

The National Farmers’ Union (NFU) recognises this and generally supports solar farm planning applications. It encourages farmers to adopt multifunctional land use – or benefits stacking as it is sometimes called.

Solar farms are ideal for multifunctional land use. They can produce clean energy, provide livestock grazing, typically for sheep, sometimes chickens and geese. The opportunity is so promising that a new industry, Agrivoltaics, is emerging that enables food crops to grow between the rows of panels. They are also ideal for increasing biodiversity, being largely free from human interference. They can provide a range of community benefits, such as cash funds, educational programmes, new footpaths, bridleways, community orchards, etc.

The NFU also notes that solar farms have a relatively modest ‘land take’ and environmental impact compared with wind power, bioenergy or other non-food land use such as horse paddocks or pharmaceutical crops. Only 0.4% of land in the UK is needed to meet the government’s 70GW solar target, much less than the 1.6% of arable land used for bioenergy in 2019, or golf courses – hardly a productive use of farmland with benefits for everyone.

“The NFU strongly encourages developers of solar farms at all scales to follow best practice guidelines for multi-purpose land use – energy production, grazing of small livestock and agri-environmental measures,” confirms the NFU’s Dr Jonathan Scurlock. “The land for solar farms remains classified as agricultural and can revert in the longer term back to agricultural use.”

The government is rightly making it a priority to tackle the ecological crisis, backed by £billions in funding. The 2021 Environment Act requires any new major development – from a housing estate to a motorway – to demonstrate a minimum Biodiversity Net Gain (BNG) of 10%. Solar farms have the potential to deliver much higher levels of BNG – gains of over 100% can sometimes be achieved.

In the past, moves to promote the biodiversity benefits of solar have been occasionally met with scepticism from planners and communities about how much could really be accomplished. But since 2014 we have been tracking the ecological improvements at our solar farms and they consistently show increases in abundance and variety of plants, pollinators and birdlife.

Independent research from Lancaster University confirms this, with a study in 2021 showing that increased populations of bumble bees in and around a solar farm provided benefits for crop pollination on land within a 1km radius. Studies now underway are expected to show even more benefits below ground.

Since BNG has become a legal requirement it can be independently measured and verified. Using a metric developed by DEFRA and Natural England we can confidently predict what can be achieved with enhancements such as sowing wildflowers and tussocky grassland, planting new trees and hedgerows and simply reducing or ceasing chemical inputs and allowing nature to recover.

When it comes to food security, the recent National Food Strategy emphasises that reducing food waste, increasing yields and reducing meat intake are the keys to food self-sufficiency. Solar farms are not the culprit. Meanwhile the European Parliament earlier in  July voted to double the bloc’s production of renewable energy to 45% by 2030 in direct response to the war in Ukraine - a clear signal where priorities lie.

We should not be asking whether farmland should be supporting energy security or food security. We should be asking how we can best use it to deliver both.

If you want to find out more about the UK solar sector, Solar Power Portal's publish Solar Media is hosting the UK Solar Summit on 14-15 September. To find out more click here.