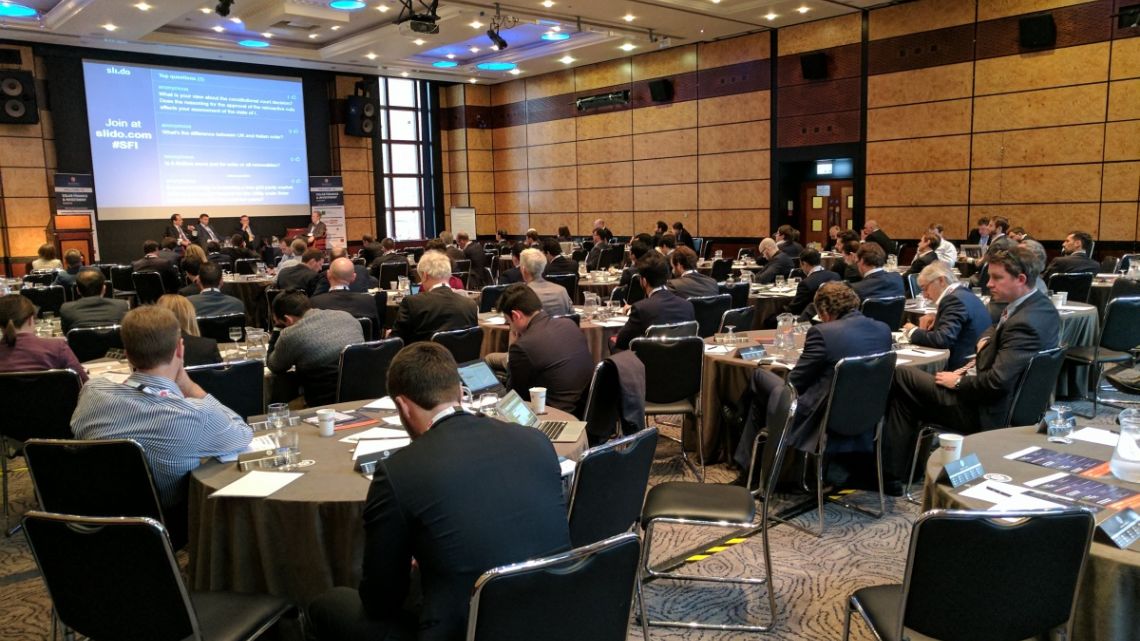 This week more than 200 delegates and speakers from major investors, asset owners and finance institutions assembled at the 2017 Solar Finance & Investment Europe conference to discuss the European solar market.

Here, we summarise some of the key topics and themes that were discussed at length over the three-day event, including the secondary market, Brexit, storage and what comes after UK solar’s build phase.

As much as 2.5GW could change hands by the end of the year

It will come as no surprise to those within the industry that the UK’s secondary solar market is booming at the moment. The deal flow we’re seeing from the likes of NextEnergy Capital, Bluefield and Foresight – which this morning splashed the cash on the UK’s largest solar farm – is testament to that. But at SFI Europe this week a handful of speakers were prepared to place an educated guess on the size of the secondary market, and it’s a big one. Foresight Solar’s Matt Black estimated that between 3 and 4GW of UK solar is currently being shopped around, a figure which our own Finlay Colville substantiated on Wednesday afternoon. He added his prediction that between 1.5GW and 2.5GW could be sold by the end of 2017 – mainly from Chinese module manufacturers who he said would need the finance. He did however add that there was no evidence to suggest that the majority of this would simply go to the current six largest asset holders, pointing specifically to EFG Hermes’ acquisition of the Terraform Power portfolio, meaning that we could see some new players enter the frame.

Brexit is having little impact on investment appetite

The pre-referendum fears were that international investment would back away from a Britain whose future was not tied to the European Union, however this has – at least not yet – failed to materialise as investors in attendance suggested that the environment has rarely been more attractive. Not only is there ample opportunity and a cheap cost of capital, but the Brexit vote has also nudged power prices, particularly day before trading, into the positive. Bluefield’s James Armstrong said that the vote had created price inflation in the short to medium term, meaning that investors are currently getting more bang for their buck than what might have originally been forecast. It remains to be seen what the long-term impact of Brexit will be but, at least for the meantime, investors are making hay while the sun shines.

Storage retrofits are on the agenda, but not quite yet

Storage was unquestionably and unsurprisingly one of the hottest topics of discussion throughout the week, but it was particularly interesting to hear the differing views. While those already engaged in storage were bullish about its potential, those from investment circles were a little more pessimistic about the immediate opportunity. The cost of the technology prohibits its installation on a purely load-shifting basis, and the current levels of certainty provided by EFR, FFR and Capacity Market contracts is not yet great enough to tempt investors. NextEnergy Capital’s Michael Bonte-Freidheim dismissed the notion that his company could embark on storage in the coming months, but said it was regarded as a “free hit” that could be adopted en masse as soon as it was more viable and went as far as to suggest it could be rolled out across the asset owner’s portfolio in its entirety in a relatively short amount of time. Armstrong agreed with the ‘free hit’ suggestion, hinting that Bluefield could go down a similar a route. With these players filling their boots with UK solar, their adoption of utility-scale storage could be a significant boon for the nascent sector.

The UK’s secondary market is booming, but the primary market is beginning to quiet down with the closure of the ROC scheme. This has pushed primary investors elsewhere, and there were a number of markets on delegate lips this week. Ireland is of course of interest, but with an uncertain political climate and subsidy support unlikely to be clarified until sometime later this year, it’s across the Channel where keen eyes are gazing. Amarenco chief John Mullins, fresh from landing backing from Prudential to develop there in the next few years, said France delivered greater investment certainty than the UK market. This was backed up by those in attendance, 36% of whom declared France to be the next primary market of choice. And it wasn’t just European markets that were discussed. Thursday’s final day saw Australia, India and Africa take centre stage with a series of roundtables focusing solely on their investment potential.

It’s all about the data

As UK solar’s build phase draws to a close, attention has quickly turned towards optimisation and how to best manage the vast array of assets that have been completed. This, delegates heard on Tuesday, is no mean feat, with portfolios becoming more and more diverse. Different panels, inverters, land conditions, EPCs and monitoring software only add to the complications. What is certain however is that data – and how it is collated and analysed – is an area of considerable importance in the coming months and years. Dan Kirk of asset owner Magnetar said that the best way for dealing with complexity is computers, with a global transition towards greater data collection taking place. BayWa r.e.’s Tobias Bittkau agreed, adding that it was not the collection of data, but how it is processed and analysed which can enable factors like predictive maintenance and more responsive component replacement should the worst happen. As asset owners seek to eke more and more value from their investment, waiting a week to replace a faulty inverter or switchgear is no longer acceptable, and it’s up to the asset manager and/or O&M provider to handle that.