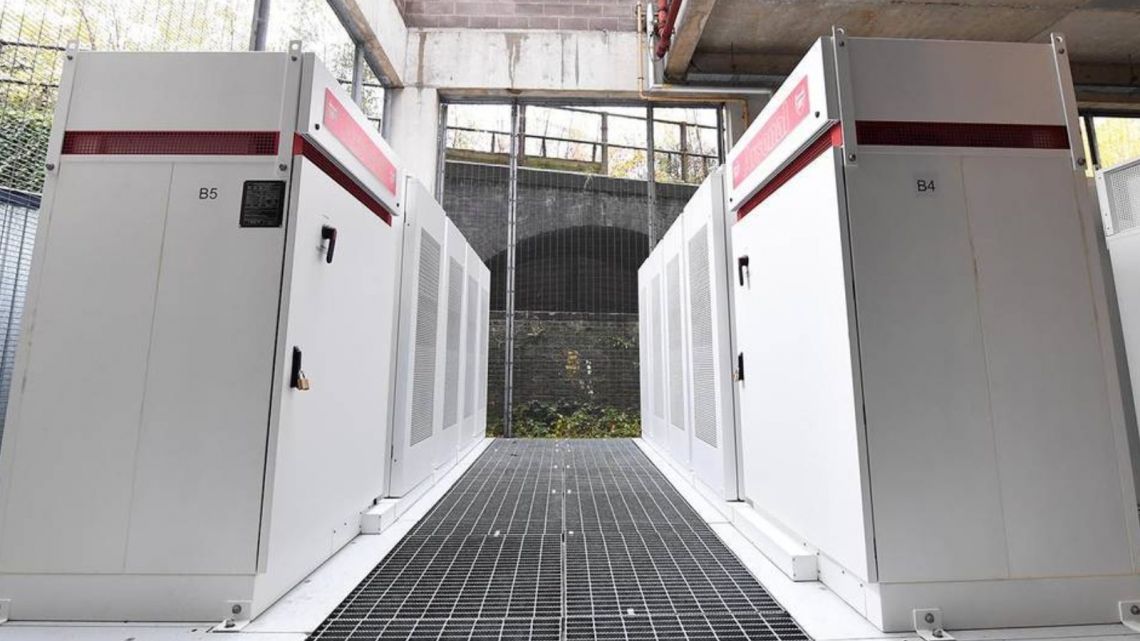 As UK battery energy storage capacity drives past the 1GW mark, the industry is now plotting its advance towards the next sizeable hurdle. This article discusses how the UK has already exceeded 1GW of installed energy storage capacity, factors behind the drive now from 1GW to 10GW, and how much annual deployment can be expected in the next few years as a result of this.

The UK utility-scale battery storage market kick started during 2017. By now, operational capacity is rapidly approaching 1.3GW, with a pipeline of projects close to 15GW ready for deployment over the next few years.

Ahead of our forthcoming webinar on 22 April 2021 - discussing these trends in much more detail - a few of the highlights from the talk are shown below. To register to attend the webinar, please use the hyperlink here.

How did the UK reach 1GW of energy storage capacity? 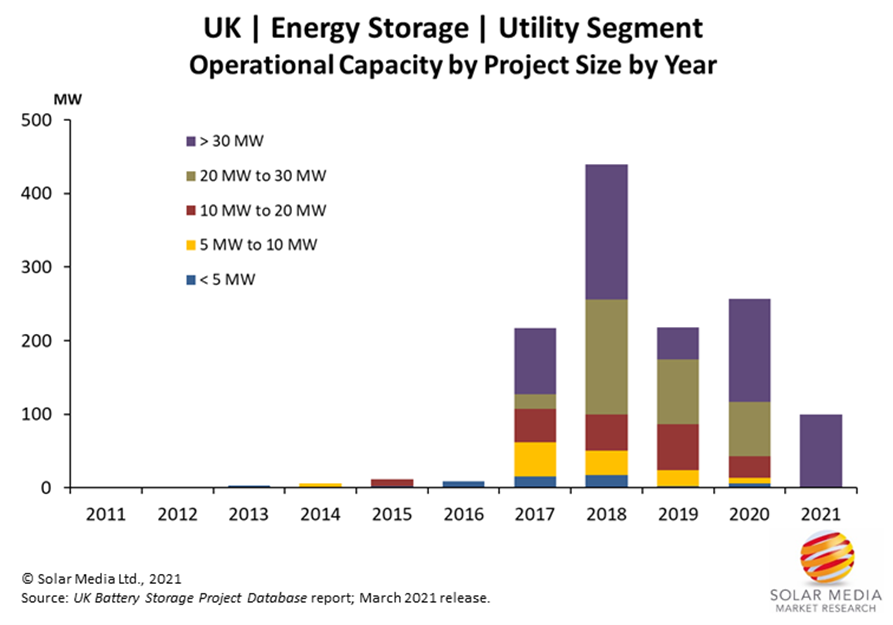 Project deployment for utility-scale energy storage projects in the UK started for real in 2017, driven by sites with >30MW capacity.

The graphic above shows that real growth in deployment started in 2017, and peaked during 2018, as successful Enhanced Frequency Response (EFR) projects were completed. Site additions during 2019 then slowed, as the market moved away from individual revenue streams to more flexible models.

In 2020, deployment was also lower than expected, due to construction delays; some of these projects will be carried over and completed during the first half of 2021. The 1GW landmark for battery storage was reached in Q2 2020 and the total capacity is now approaching 1.3GW.

So far this year, two standalone projects 49.9MW in size have been energised. Both sites are located in Northern Ireland and developed by Gore Street Capital.

Operational sites have now been installed throughout all regions in the UK, with the South East region having the largest operational capacity and this region is also expected to increasingly dominate capacity additions in the future.

While a broad mix of project sizes has been deployed until now, operational capacity is dominated by projects larger than 30MW. Generally, the size of the project depends on the type of project being constructed; 49.9MW is the most common size for standalone projects, whereas co-located projects can vary in size but are usually much smaller. 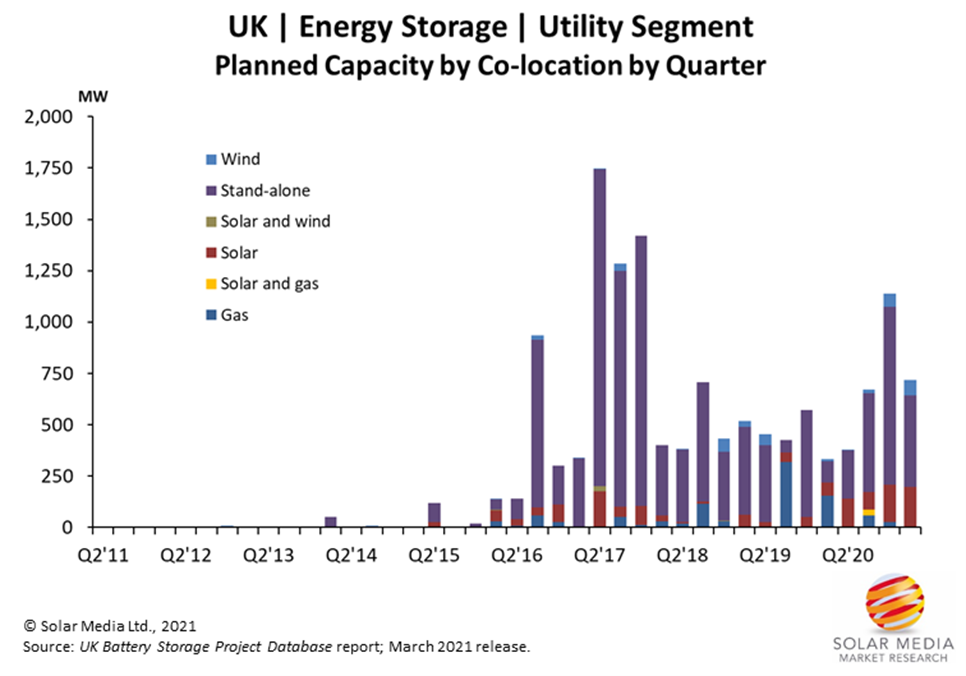 Utility-scale battery storage projects in the UK are dominated by stand-alone sites; co-located sites tend to be much smaller in size.

After seeing how successful projects were in the EFR auction in 2016, developers and planners were then motivated to submit more applications for battery energy storage projects; this resulted in a surge of new applications during 2017.

In terms of co-location, the market is dominated by standalone sites; 79% of total planned capacity is from standalone projects.

There has been a recent increase in submitted applications for new-build wind and solar farms, co-located with battery storage. However, since these projects tend to be much smaller in size, the market will continue to be driven by large capacity, standalone sites.

Co-locating storage with solar is the most common type of co-located project. Due to the variable nature of solar generation, grid connections are often underutilised, which is why many developers choose to co-locate battery storage with solar.

The drive from 1GW to 10GW of energy storage capacity 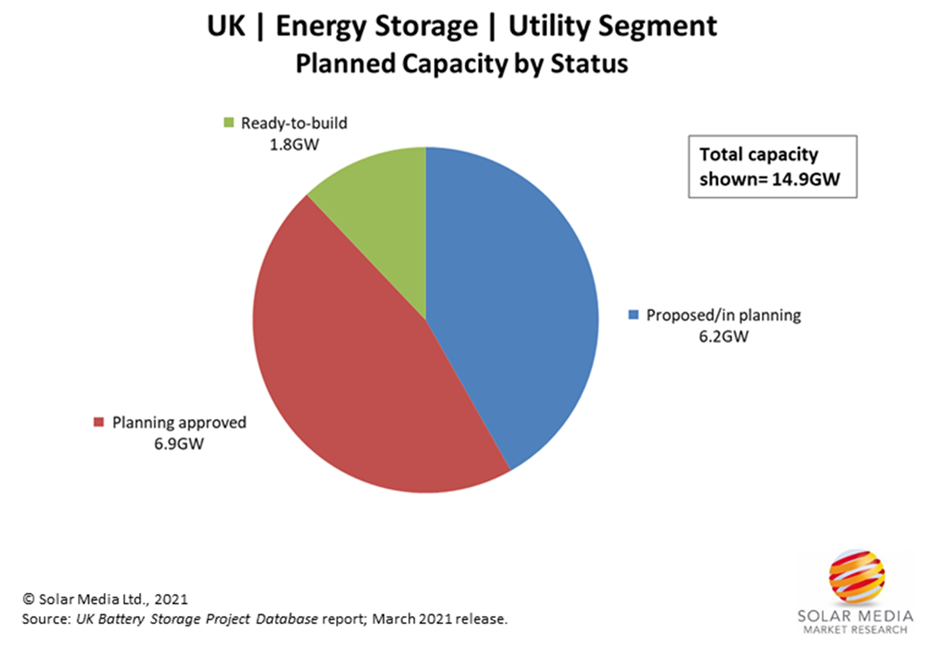 1.8GW of the utility-scale projects in the UK are in the ready-to-build stage, framing the scale of deployment levels within the next 12-18 months.

The project pipeline has increased much faster than deployment levels until now, with 14.9GW planned and 1.3GW operational.

1.8GW of projects are currently ‘ready-to-build’ or ‘under construction’, potentially all completed over the next 12-18 months. (Projects are considered ‘ready-to-build’ once there has been indication of any progress, a final developer coming on board pre-construction, or an EPC or battery supplier having been selected). The average timeline for projects - from application being submitted to final commissioning - is about three years.

Some larger projects have been submitted into planning, since the 50MW threshold was lifted. However, 49.9MW is still the most common size for newly submitted projects. The average project size is likely to increase with changes to planning, going forward.

We have already started to see a few projects at the 100MW-level being submitted into planning, such as the Black Law BESS site being developed by Scottish Power Renewables, which is co-located with their existing Black Law Wind Farm.

Forecasting the next phase of major growth

Forecasting deployment levels over the next decade is, of course, a challenging exercise. However, all eyes are firmly on the move now from 1GW to 10GW of installed battery energy storage capacity in the UK.

Recently, we have been looking at how this transition may unfold. There are several factors being used here, including the pipeline of planned projects (for the short-term), overall market demand/need within the UK sector, and growth levels typically seen within high market growth segments across energy and renewables.

More details on this new forecasting model will be shown in the webinar on 22 April 2021.

Efforts by our in-house market research team have stepped up in recent months, in particular as the focus moves from 1GW to 10GW. All projects are captured and fully audited in the UK Battery Storage Project Database report. To access this information – updated monthly – please contact us via the report landing page here.