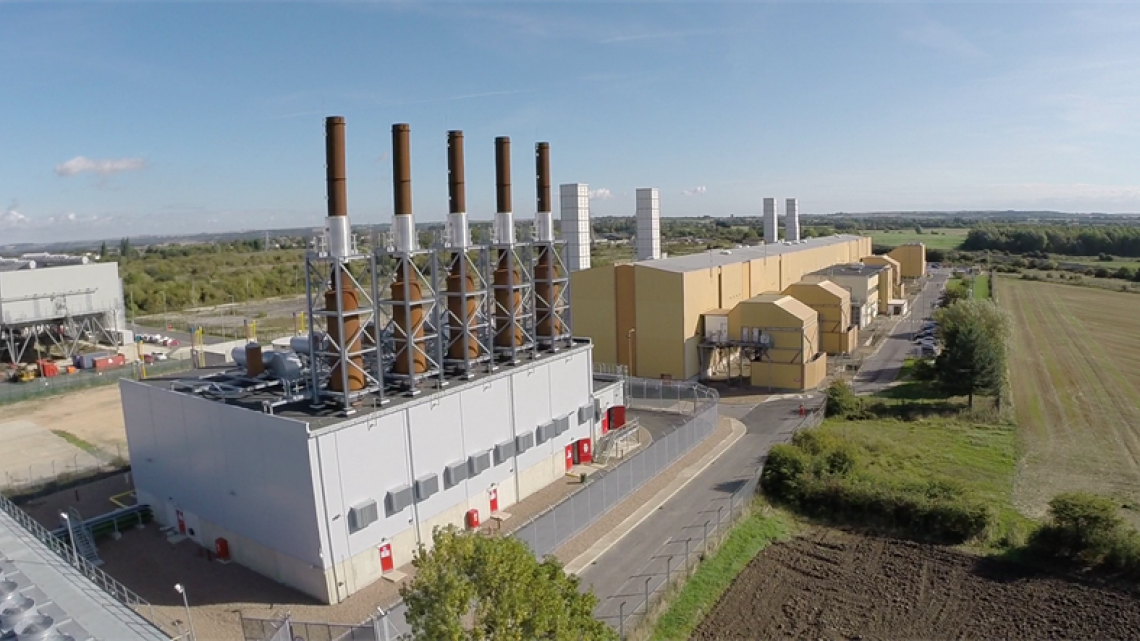 The latest release of the UK Battery Storage Project database report reveals that nearly 300MW of utility scale battery storage was deployed in 2019, bringing cumulative installations to over 900MW at the end of last year.

The total pipeline of battery storage projects in the UK has now reached over 13.5GW and is made up of a diverse range of projects, including co-location with renewables, stand-alone and behind-the-meter.

This article looks at the range of projects that have been built to date in the UK, and how specific market dynamics are affecting the types of projects planned for the future.

The data presented is taken from the March edition of the UK Battery Storage Project Database Report. Details on how to access the report can be found through the link here.

Our in-house market research team at Solar Media has been tracking the UK storage market since 2016. Initially, it seemed that the market would be driven by auctions and procurement by National Grid for frequency response services and capacity. However, over time, we have seen revenues from these sources fall off; projects are now diversifying revenue streams to different forms of trading, in addition to contracts from the National Grid.

The chart below shows deployment since 2015. We see an increase in deployment in 2018 as projects awarded under the EFR were built out. Deployment in 2019 was lower due to the absence of a specific boost to the market (such as EFR), but was dominated by projects that were awarded Capacity Market contracts in the 2016/2017 and 2017/2018 auctions. The revenues available for battery storage from the Capacity Market in 2016/2017 were much higher than 2017/2018 due to the change in de-rating for batteries depending on their duration. 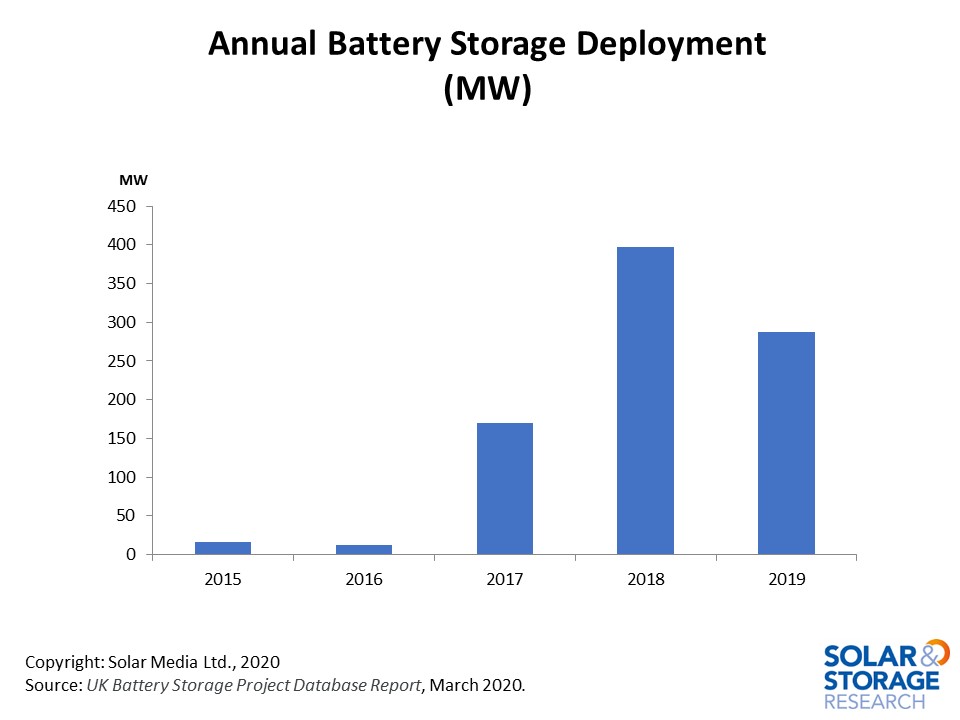 Looking at the pipeline of projects that could be built in 2020 and 2021, we can see 1.3GW currently at the ready-to-build stage. These projects have both planning permission and a grid connection, and there are clear indications that this group of projects is progressing. Typically, progress can include site investment, or a contractor/supplier being assigned to the build process. 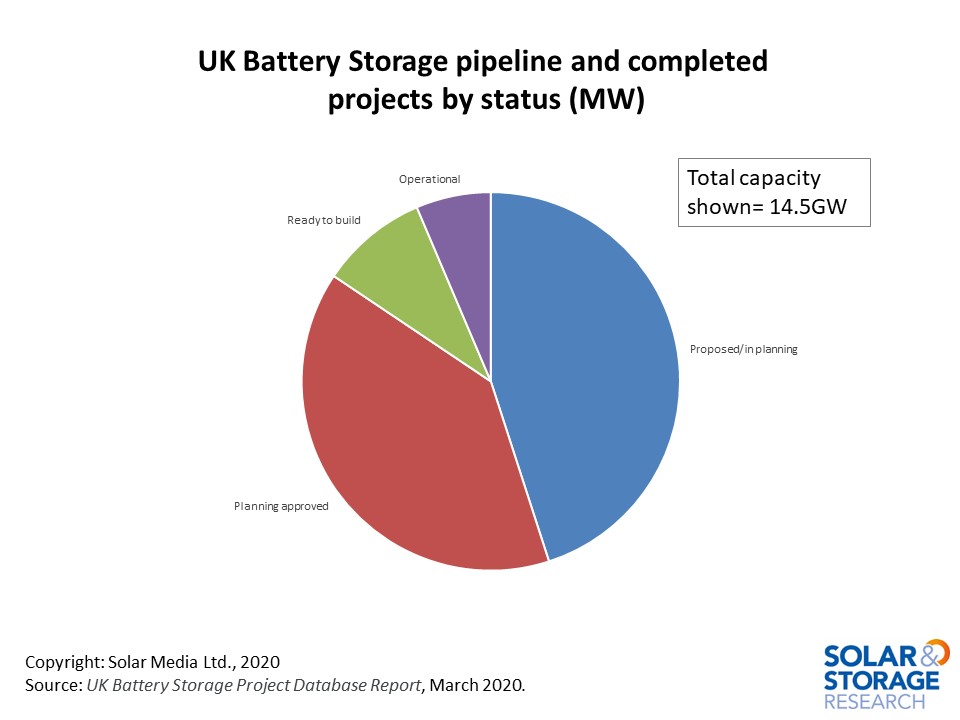 Looking at the project pipeline in detail, there is a wide range of project types and companies bringing them forward.

We saw a big change in 2019 with battery storage able to access the balancing mechanism and other forms of trading. This opened up new revenue streams for projects and brought new companies into the market, offering trading platforms and software to enable battery storage to participate in these markets.

The average size for projects at the ready-to-build stage is 26MW, up from 20MW for projects completed in 2019. This reflects a large number of projects of 49.9MW that are being proposed, in addition to a wide range of smaller project sizes and batteries co-located with renewables. 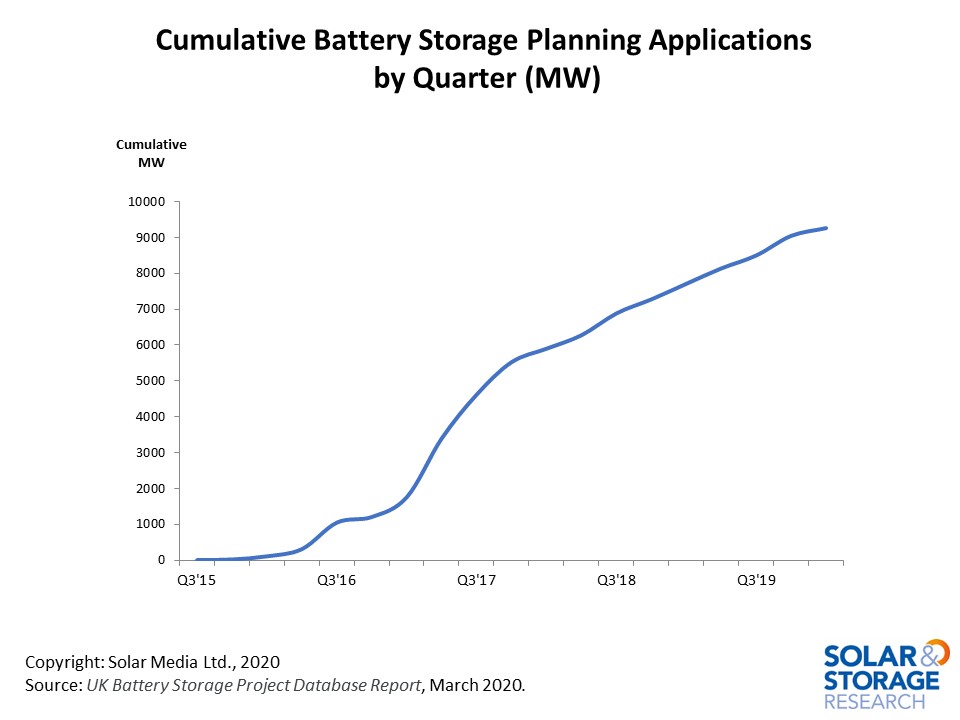 There is a large number of projects of 49.9MW proposed currently; in the short term, the limit will effectively remain at the 50MW mark as the timeline for changing the rules (around projects larger than 50MW having to apply as NIS projects) is not yet clear. There are some large projects at the 100MW and higher level proposed; most of these are for existing generation sites as fossil power stations coming offline.

There is also an increase in co-location, especially involving new and retrofitted wind farms. With large-scale UK solar deployment expected to rebound in the coming years (and many of the new solar sites have the option to add energy storage if costs and revenues stack up). We are also seeing several wind developers working on portfolios of wind farms plus storage; much of this is in Scotland, where a high portion of onshore UK wind farm capacity is located.

Most operational battery storage projects in the UK are between half-an-hour and one-hour duration. This is due to the frequency services they have been designed to provide which incentivize short duration fast response batteries. However, we are seeing a shift towards slightly longer durations of one to two hours, as batteries operate in markets with different requirements.

In the next 12 months, we will start to see large pipelines of projects being built; with many projects at 49.9MW already under construction, the capacity built will increase rapidly. The UK Battery Storage Project database report is now being updated monthly by the Solar Media in-house research team, to keep up with the rapidly changing market. More information on how to access the report is available here.