Last year was one of the most significant years for solar PV in the UK. During 2021, the market fully established itself in a post-subsidy climate, no longer dependent on government hand-outs by way of production-based incentives.

This article outlines the growth of UK solar during 2021, by quarter and by segment, discussing the factors that led to strong annual growth and a pipeline that supports continued market expansion out to 2030.

The final quarter of 2021 was the strongest of the year, at 313MWp-dc. This was certainly not expected during most of 2021, largely due to the final quarter having less hours of daylight. However, this did not seem to impact build-out of projects and sites.

The largest contribution came from ground-mounted solar farms. Eight mid-size solar farms were completed, adding to 142MW, with four of these in the 20-30MW range. There were also seven smaller sites in the 1-10MW range, funded and owned by public sector entities (NHS, research institutes, local councils, MoD).

The two key rooftop segments (residential and non-residential) continued to see modest Q/Q and Y/Y growth, supported by a healthy pipeline going into 2022.

The figure below shows quarterly solar deployed in the UK back to the start of 2019, when the FiT scheme was abolished. 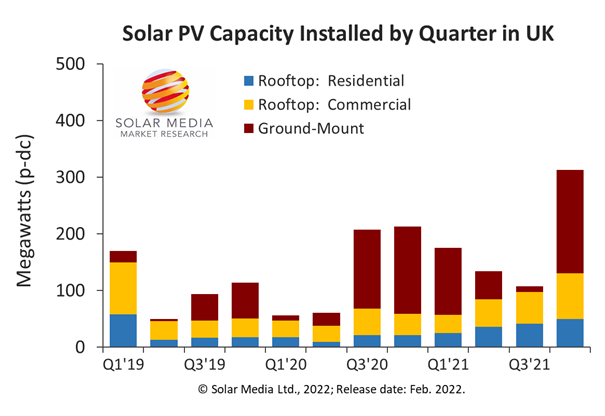 At the start of 2021, we expected the final market size for the year to be influenced heavily by how many large-scale solar farms were completed. This indeed turned out to be the case. A GW-scale market was only going to materialise if a dozen or so 50MW sites were completed.

Most large-scale solar farms – that were approved – were pushed out, either due to firm PPAs not being in place or lack of attractively priced modules; or a combination of both.

The final figure for the year – 730MW – ended up being split almost equally across rooftops and ground-mount builds, with commercial rooftops being the other major segment by volume.

The figure below shows annual solar PV installed in the UK back to 2010, essentially when the industry ‘started’. It might look like we are still some way off from the incentive-driven highs of 2014 to 2016, but watch this space over the next few years! 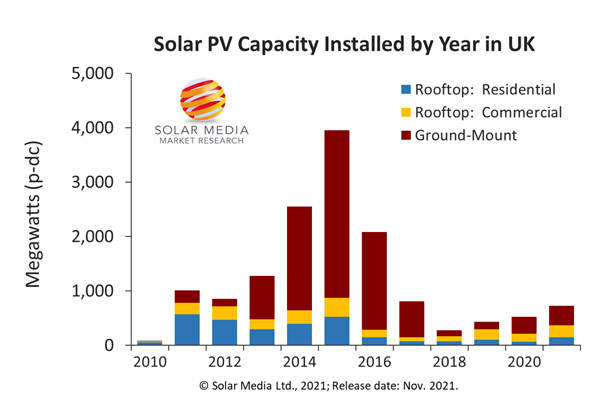 Cumulative PV installed in the UK at the end of 2021 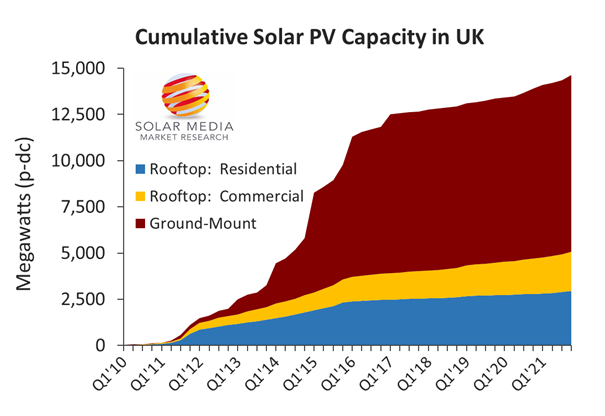 Since there are no longer any government-based production subsidies available (since the start of 2019), the government (more specifically the Department for Business, Energy and Industrial Strategy, or BEIS) has no capacity feeds based on accreditation registers. Therefore, it should not come as a surprise that government estimates for the market size over the last two years are starting too look somewhat out of synch.

This can be seen clearly in the graphic below. The government data is now 1GW on the low side, with much of this coming from >50kW rooftops installed and almost all ground-mount activity since the start of 2019.

This delta is only going to increase going forward. Therefore, it is an open question if BEIS should even put out numbers, as they have the potential now to be misleading; especially so if used as the basis for any UK energy policy strategy going forward involving solar. 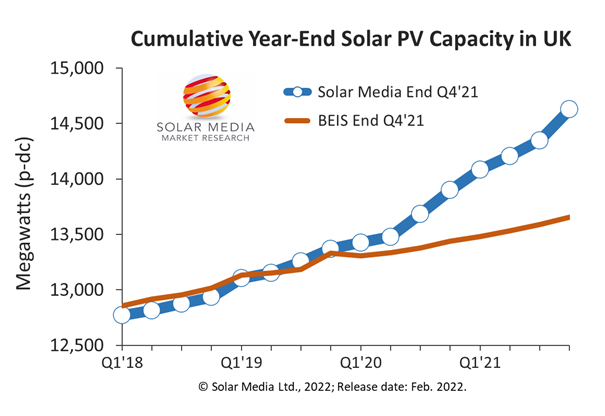 The residential segment is expected to continue to post Q/Q and Y/Y growth, almost independent of any seasonality. The commercial rooftop segment has greater scope for growth in 2022. I have written on Solar Power Portal recently that the overall rooftop market in the UK during 2022 will likely exceed 500MW.

It is still very hard to forecast the contribution from the ground-mount segment. This could be anywhere from 500MW to 1.5GW, and this will not be known until late in 2022.

Either way, it seems the UK market is destined to return to GW-status in 2022 as a cautious estimate, with 2GW being the ambitious upside figure.

The UK solar market has not been so vibrant since the early growth phase of 2010-2015. New players, and new money is coming into the sector, and different relationships are being established pre-build, during construction and post-build.

To learn more about UK solar projects and the companies driving deployment during 2022 and beyond, various reports are available. Learn more about these by clicking on the link here. Also, we are organising a two-day UK-solar specific event in London – the UK Solar Summit - on 17-18 May 2022. Each of these offers an ideal way to understand the market and meet with the leading players.