Lightsource BP is among the companies announcing 49.9MW solar farms, including gaining planning permission for a site in Durham in July. Image: Lightsource BP.

Project developers in the UK are now working on overdrive, with the country going through its largest ever phase of new site identification, pre-planning and full planning activity. This comes on the back of an already frantic 2020, leading to a pre-build large-scale ground-mount pipeline capacity now at 10.6GW.

The article discusses the key features of this planning deluge, showing graphics that explain the trends underway, and discusses the new focus on 49.9MWp-dc sites that will be based on 500W-plus mono bifacial panels, mounted on single-axis tracking systems.

Full details of all projects making up the 10.6GW of new solar sites (including key stakeholders needed to engage with on financing and component supply) are contained in our UK Large-Scale Solar Farms: The Post-Subsidy Prospect List report, updated daily and released monthly by our research team. Details on accessing this report can be found here.

2GW of new sites during the past 3 months

During 2018 and 2019, there were clear signs that developers were starting to identify new post-subsidy solar farm sites in the UK, and 2019 saw a steady addition of new sites at screening/scoping or full planning application stage. Indeed, this trend continued for the first few months of 2020.

The big change occurred during March/April 2020, which we can only assume was driven by the fact that the COVID-19 pandemic had severely impacted UK day-to-day life and introduced uncertainty related to the plans of a small group to start build of subsidy-free sites during the summer of 2020. While this clearly allows some companies to allocate more resource to developing larger pipelines ahead of a stronger 2021 build-phase, it is far from the only reason.

One has to look also to a clear shift in national sentiment when it comes to climate change. For the past few years, there were signs that things were more active from a public demonstration standpoint; but little if any impact at all on government priority or policy.

During 2020, while there are few specifics in terms of legislation, things do seem to have changed and if anything, there has been a softening in the government’s approach to renewables, in particular from onshore generation (as opposed to seemingly only favouring offshore wind).

Perhaps also 2020 has seen a less blatant reaching out by the UK treasury for overseas money to bankroll new infrastructure projects, especially as it relates to UK-China relations; and the UK simply being one of many countries in recent years that had been all too happy to be on the list of Beijing’s drive to move RMB overseas.

There are yet more reasons however that have added to the mix, ultimately driving the current developer deluge.

The cost of solar continues to come down dramatically, and the past 12 months has again seen massive changes. However, it is not simply now the $/W pricing of a 60 or 72-cell panel: module supply now looks like an altogether new proposition, especially if you’ve been out the loop for the past 3-4 years (as many UK developers in fact were).

Panels are now based on larger solar cells (some up to 210mm diameter compared to the old ‘standard’ of 156mm or 6-inch). These cells are now typically cut in two (what’s called half-cut cells). There are now more than 72 cells (or 144 half-cut cells) being put into a single module. So the modules are larger, and the cells are also much more efficient. The net result is that module powers (front-surface Watt-peak-dc) are routinely being used for large-scale sites, that are 500W and above.

However, the changes go further. Because the solar industry is now mostly using cells made with (high purity) mono-crystalline wafers, mainstream cells are now mono (as opposed to the multi crystalline silicon, called ‘poly’ by installers often) and also have a transparent coating on the rear surface (as opposed to old style that used a thin layer of aluminium). These new cells are called ‘PERC’ and now rear surfaces can absorb sunlight; i.e. bifacial.

So not only are modules higher in power (albeit larger in size), but they can absorb front and back. This creates new opportunities for yield and by default changes the legacy fixed-axis arrangement of modules on mounting structures. To fully optimise the energy output from bifacial modules, single-axis trackers are highly desirable, not to mention considering the ground surface and any potential reflectivity.

Therefore, the key difference is energy yield per module-cost, and this metric has moved very much in the favour of system developers and EPCs.

There is also a different class of money on the table now for developing large pre-build portfolios in the UK. In previous surges of site builds, the tendency was for the pure-play developer (such as the former TGC Renewables or Kronos) to deal with the site identification and pre-planning side of things. While this still forms a key part of the new planning uptick in the UK, there is a very considerable boost having the likes of Statkraft, Lightsource BP, Macquarie and others bankrolling GW-level deployment plans as far up the value-chain as initial site screening and scoping.

This drive to GW-level portfolios is a key part of the major shift to site-size maximization, especially important when subsidies are no longer on offer. This is clearly seen now in the strong tendency to max out site size at 49.9MWp-dc, the threshold (in England) before National Grid approval is necessary.

Let’s look through the data now to back up the above narrative.

First, consider the monthly new planning sites and capacity levels, shown below back to January 2019 when the first major drive in post-subsidy applications was witnessed. 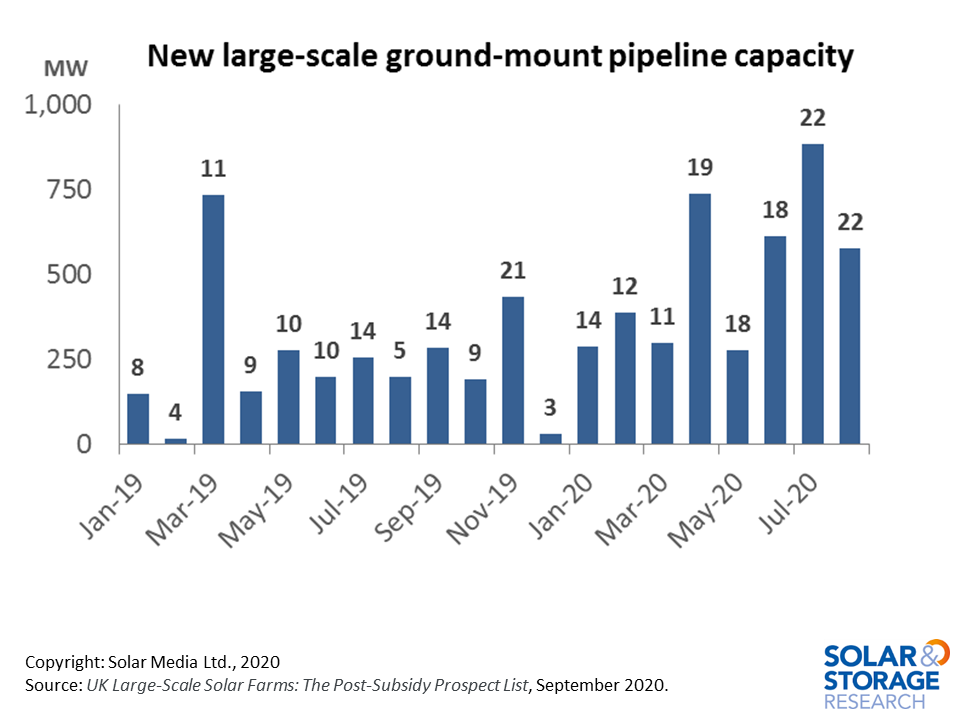 New UK solar farm planning activity saw a major uptick in April 2020, and this has continued with about 500MW of new planning capacity being added to the pipeline each month.

The graph above shows the number of new sites added to the overall pre-build project pipeline each month, with the total capacity recorded on the y-axis. Averaging at about 20 new sites per month at around 500MW total, the quick conclusion would be that sites were typically about 25MW in size. However, this is not the case, as the above site count has a modest contribution from smaller (often public-sector or landowner) sites at around the MW-level.

To fully understand the new norm for large-scale UK solar farms, we need to look at the overall pipeline that is coming from different sized sites. This is shown in the two figures below.

First, let’s look at the entire pipeline by project count; i.e. how many sites fall into certain size categories. To emphasise the number of sites hitting the 49.9MWp-dc figure, this size category has its own grouping: otherwise, we group site capacities into bands (e.g. 10-20MW). 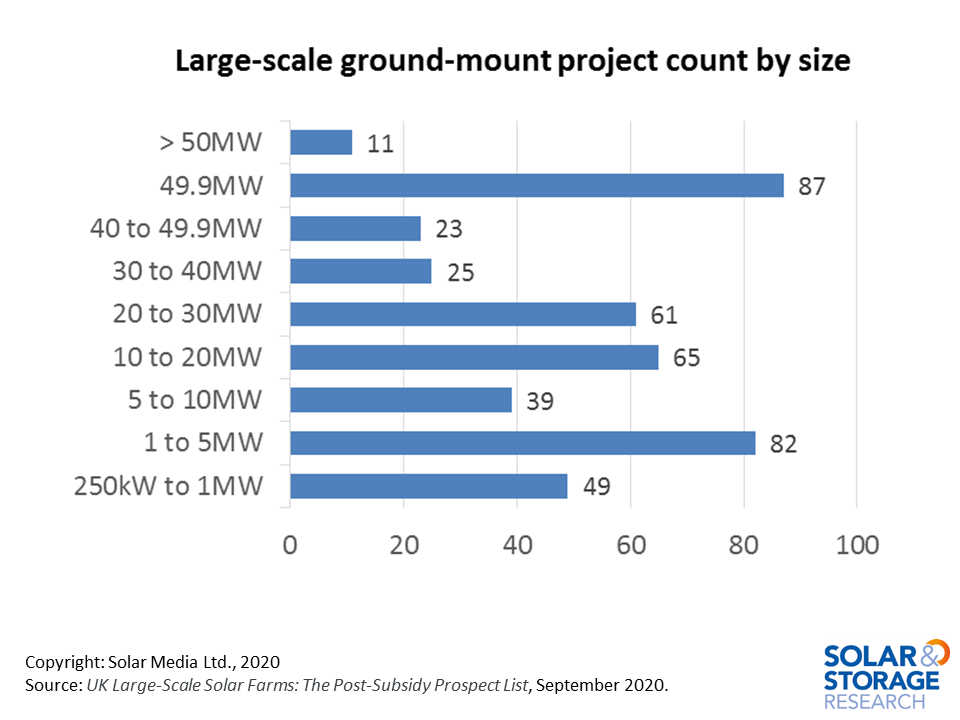 Most of the new solar farms being proposed/developed in the UK today are either 49.9MWp-dc or fall into the 1-5MW band. The smaller sites are often local-council, public-sector or landowner based applications.

Perhaps however, the most striking visualisation of the 49.9MWp-dc surge is evident when plotting planned capacity by size category, as opposed to the project count numbers. This is shown below. 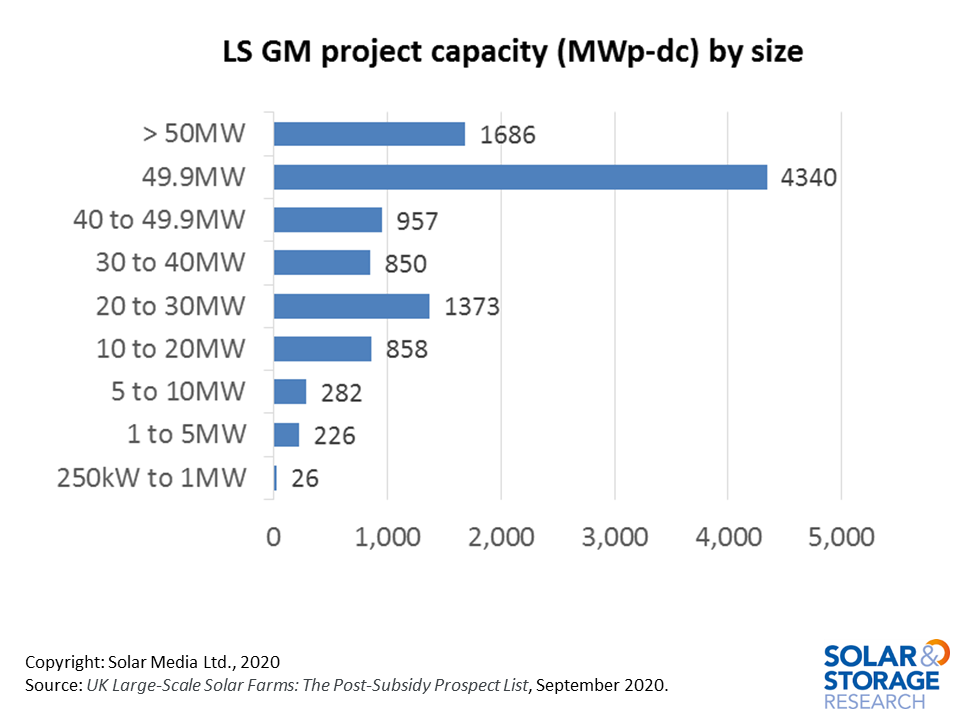 More than 40% of the entire ground-mount pipeline capacity in the UK is now coming from sites planned to operate at exactly 49.9MWp-dc, and based in different regions across England. A small handful of sites are being planned above this and subject to national or regional government planning adjudication.

Finally, let’s have a look at how the overall pipeline has grown over the past 18 months. 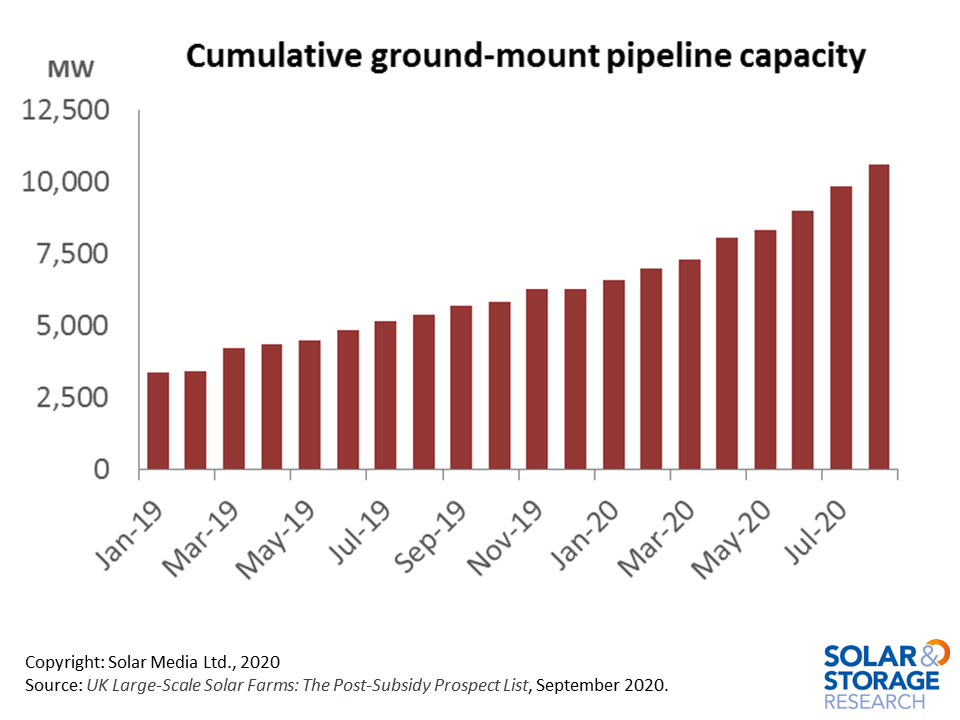 Over 7GW of new solar farms have been identified over the past 18 months in the UK, with many having full applications either approved or pending local council approval in the next few months.

When mass build-out of large-scale solar farms starts in earnest (probably 2021), it is clear therefore that we may be dealing in somewhat binary terms; either sites are not built or they are likely to be designed for 49.9Mp-dc. There will of course be sites smaller (and possibly one or two larger), but very quickly the key for investors will be on minimising build-cost and maximising energy-yield at one special installed capacity level.

As we go down through the supply-chain, there will therefore be more winners than losers, and not the mass frenzy of RoC/FiT days when many module and inverter suppliers could readily to commit to 5MW of readily-available low-cost product, based on me-too modules delivering 260-270W.

To learn about all the sites making up the 10.6GW pipeline in the UK today, including all the key stakeholders of every site, please follow the link here to learn how to subscribe to the monthly our UK Large-Scale Solar Farms: The Post-Subsidy Prospect List report.