The UK is primed to return to gigawatt-scale deployment status in 2020, driven by post-subsidy large-scale ground-mount utility solar farms.

By the end of January 2020, the large-scale UK pipeline has grown to over 6.5GW of projects with planning application activity showing no signs of slowing down this year.

This article provides an update of the status of the 6.6GW of pipeline projects, discusses the scale of deployment expected during this calendar year (2020), and outlines how Solar Power Portal’s forthcoming Utility Solar Summit UK conference in London on 10-11 June 2020 promises to be a must-attend event for all stakeholders involved in the UK large-scale solar sector.

While many of the sites that were undeveloped or partially developed from FiT/ROC times were hoped to be repurposed quickly by developers as ‘subsidy-free’, it quickly became apparent to most that such claims were somewhat aspirational.

During the first half of 2018, we started to look more closely at the real status of 309 ground-mounted sites in the UK (just over 4GW of capacity) that fell into the above grouping. This exercise resulted in the pipeline being slashed to just 131 sites (2.5GW) by October 2018.

Within this 2.5GW of capacity, legacy FiT/ROC planned sites contributed about 850MW of capacity, with the majority coming from new sites that had gone into planning (or were being scoped) after subsidies had been removed.

By the end of January 2019, this 2.5GW number had grown to over 3.3GW. It was now clear to us that significant money and resource was being assigned to large-scale solar farms in a true ‘zero-subsidy’ environment that would likely get underway during 2020 across multiple sites. The graphic below now takes up the story from January 2019 to the end of January 2020. 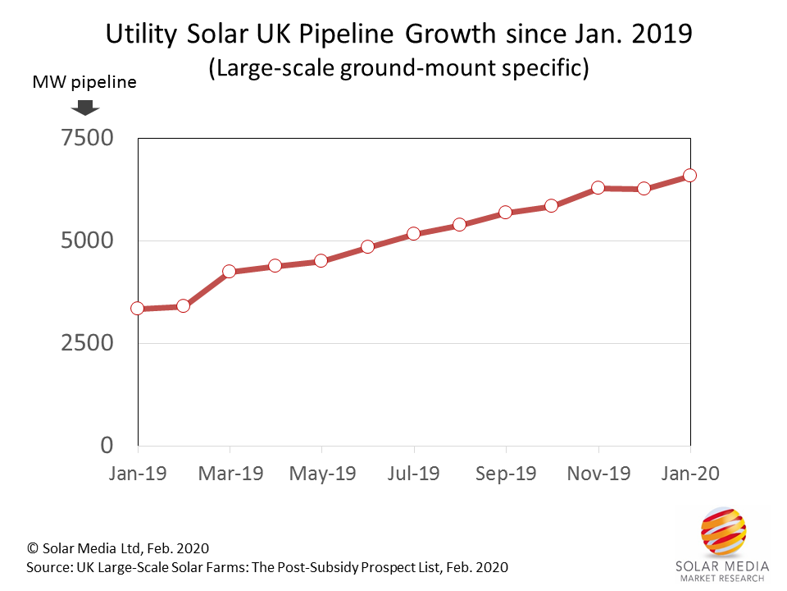 The utility-scale ground-mount UK solar pipeline has almost doubled in the past 12 months, with over 3.2GW of new capacity being progressed through local and national planning authorities.

The pipeline currently stands at about 6.6GW, and is expected to exceed 7.5GW in the next few months, before summer in the UK when build will start in earnest. Until then, some sites are being enabled, mostly still coming from the 800-900MW of legacy planned sites that were carried over once subsidies were removed. This explains the builds that occurred and received headline press coverage during the past two years also.

In fact, until now, while there has been much fanfare from various quarters about post-subsidy build-outs in the UK. However, the larger builds here were planned and developed (or even partially-built) during FiT/ROC times. The only real post-subsidy activity (about 25MW worth) in the past couple of years has come from waste water treatment works (or similar areas).

Therefore, 2020 is not just going to be the year when the UK returns to GW-plus annual utility-scale ground-mounted solar deployment, it will also be the start of real post (or zero) subsidy capacity additions.

Let’s now have a closer look at the 6.6GW of pipeline capacity, as we try to understand how much of this will be built in 2020.

Pipeline numbers should always be explained fully, with risk. Here is what makes up the 6.6GW pipeline of large-scale ground-mounted sites in the UK, as of the end of January 2020.

The most important segmentation comes from how close sites are to being shovel-ready. To be shovel-ready, sites must have planning application granted, should have satisfied key planning conditions from local authorities, and have grid-connection approval.

The starting point of course is to have full planning applications submitted and approved (with pre-build conditions at a minimum). If this is not in place yet, then everything else is largely irrelevant. Therefore, let’s start by looking at how the 6.6GW is segmented by planning application status.

Trends alone for pre-application sites are critical in terms of a healthy pipeline being maintained or growing/declining. Scoping/screening (or public consultations) are normally the first signs of build activity, although many developers still opt to bypass the public consultation stage, only addressing this if they must.

The remaining capacity is all at planning application stages, with 157 sites (just under 2GW) having had planning approved. Critically, this includes 14 sites of 40MW and above, with a total of 710MW of which about 250MW of sites are already discharging conditions pre-build (with some officially at ‘under-construction’ stages).

In fact, within this approved 2GW of sites, 57 of these are sites of 10MW or above (total 1.64GW). In some respects, this is perhaps the list of sites that should be on the opportunities list of stakeholders that would benefit from being part of the build, or post-build phases. This grouping obviously has your standard module, inverter and mounting suppliers, but also now tracker suppliers for the anticipated uptick in bifacial module use during 2020/2021 in the UK.

Also here, we can add secondary site buyers (those looking to buy shovel ready sites or portfolios) that aim to build/own short-term or for longer; and naturally, EPCs, sub-contractors and pure-play contracting services engaged during the build.

In the background for 2020, there are just over 50 sites (almost 1.3GW) currently submitted to planning and awaiting decisions. If we remove the mega nationally significant infrastructure projects (NSIPs), and confine to 10MW sites and above, there are 27 sites (total 900MW) that are likely to be approved in the coming months. While in the days of ROCs in particular, planning success was far from 100% (owing in part to the fragmented range of developers and the short-termism at play), nowadays it is rare for large-scale projects to be rejected by planning authorities. This is because the players in the mix now developing sites are operating in a more professional and credible manner (as would be expected in a non-subsidy world).

Therefore, we could easily see about 700MW of the 900MW figure above being approved in the coming months, putting the approved pipeline closer to 3GW.

This figure of 3GW becomes the real pipeline today for mid-year 2020 large-scale subsidy-free ground-mount utility solar build-out in the UK.

How much utility solar will be built during 2020 in the UK?

This is the big question of course. Since we are now in unchartered waters (absence of subsidies, and importantly subsidy deadlines), there is no reference point as such to work off when comparing filtered pipelines, planning status and completed project building.

However, it is not inconceivable that half of this meaningful/approved 3GW will in fact be built during the year; namely 1.5GW. To see how likely this may be, it is useful to look at this by pre-build site-owner profile. This allows a means of sanity-checking the sites and in part also requires knowing how these different companies operate, what timelines they are working off with these projects; basically – how committed are they now to seeing through the projects or finding a partner/buyer/investor to go the final stage.

To do this, we approach the forecasting route from a different angle now. This involves using a bottom-up (site-specific) forecast where we look at every project in the pipeline database and estimate build quarter (by default year also) and likelihood of build being done then. By filtering the entire list to 2020 only and removing all projects less than 50% probability, we get to 129 projects (1.45GW capacity).

Since we tend to be somewhat sceptical still of build-prospects of the whole 6GW-plus of projects, it is not surprising that we are lower than the back-of-the-envelope 1.5GW forecast above. However, the two routes would seem to match up very well, and this probably is supporting the 1.5GW number for the year – or at least comfortably greater than 1GW, possibly up to 1.5GW, and with a heroic effort, above this level.

For now, let’s keep to the 1.45GW here and look at the projects now by developer profile. Just over 500MW of this does have the option of storage being included in the build-phase, but the actual storage build will be much lower, as many of the new applications are simply listing storage as an option with no real motivation to complicate the revenue streams from solar-only generation.

In terms of the geographic split of this 1.45GW: 293MW is located in the East Midlands, 182MW in the Eastern region of England, 70MW in the North West, 110MW in Scotland, 90MW in the South East, 147MW in the South West, 229MW in Wales, 84MW in the West Midlands, and 191MW in Yorkshire and Humber. Other regions have minimal contributions. However, this still shows that the build is largely country-wide.

If we remove sites here less than 10MW in size, we are left with 44 sites (total 1.2GW) that, once again, make up our key target list of projects for 2020. This set of sites is being driven by about 10-20 stakeholders (pure-play developers, long-term portfolio holders, classic flippers), some of whom are among the most experienced within the UK large-scale sector, or have a global footprint with the UK market a key focus.

Going through all the projects in the pipeline in detail is essential in terms of trying to work out just how much utility solar will be built in the UK during 2020, in the country’s first year of zero-subsidy existence. Since the capacity-addition is going to be rather step-wise in growth, this makes forecasting much harder this year. However, if I can summarize quickly the analysis above, it can be interpreted as follows:

Approximately 1-1.5GW of new large-scale solar farms (mostly in the 10MW-plus range, of which the 40MW-plus group will be contributing the bulk of the new capacity) are likely to be constructed in the UK during 2020, all subsidy-free and most having gone into planning portals after the ROCs were closed down for solar.

About 40-50 sites will make up this 1-1.5GW of utility capacity, driven by 10-20 key stakeholders now behind the development, financing and pre-construction.

Behind this first phase of builds in 2020, there is a growing pipeline at the multi-GW stage, with new site additions at the rate of about 200-300MW per month now. This will ensure, regardless of the build levels in 2020, that multi-gigawatts of approved sites will remain as opportunities going into 2021 and beyond.

For now, NSIP projects are being excluded from our short-term forecasting owing to the unique challenges facing these and the high risk arising from the political whims at the time that will likely govern whether these come to fruition or not. Either way, they are not running on 2020 build timelines, but probably somewhere in the 2022-2025 period (if at all).

Finding where the sites are? Profiting from the new site builds in 2020?

The next few months will be critical in terms of which sites are built during the summer months of 2020, which developers/asset-owners finance these sites through construction, which EPCs (and sub-contractors) are selected for the build phase, and which component suppliers (modules, inverters, mounting/trackers) win the business.

A full audit trail on all pipeline projects can be obtained through our UK Large-Scale Solar Farms: The Post-Subsidy Prospect List report, updated monthly.

To be part of our new, exclusive two-day event – Utility Solar Summit UK – in London on 10-11 June 2020, please register interest at the event website here. Confined purely to the 100-150 companies that are key to enabling the GW-plus annual deployment of utility solar in the UK starting this year, the Utility Solar Summit UK event will be the must-attend UK event of 2020, with partnering opportunities restricted to the key players in the sector only.