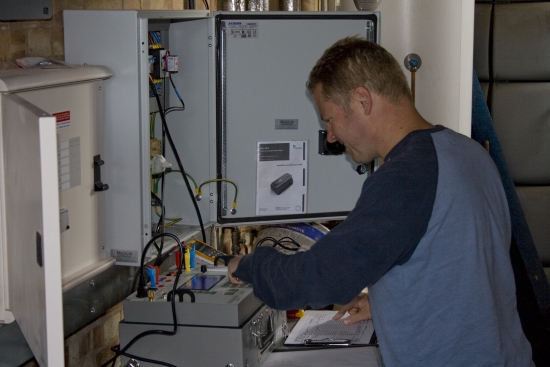 Mis-selling of domestic battery storage systems is rife in the UK according to consumer protection scheme RECC. Image: Rexel.

A consumer protection scheme for domestic renewables has revealed that it received at least one complaint a week during 2016 related to battery storage, half of which concerned mis-selling practices.

Renewable Energy Consumer Code (RECC), which this week extended its standards to battery storage systems and other ‘related’ products sold alongside solar panels, added that the trend has continued into 2017 with 13 complaints already recorded.

The mis-selling complaints related to a range of false claims around battery storage systems, including companies stating that the units are certified to the UK’s Microgeneration Certification Scheme (MCS), which certifies products and installers to ensure high standards.

Currently, the scheme does not cover battery storage.

Other complaints related to firms falsely identifying themselves as both MCS and RECC registered installers.

Speaking at an energy storage event in February Virginia Graham, chief executive at Renewable Energy Assurance (REAL) which facilitates RECC, said: “Unfortunately mis-selling is already common. In 2016 on average we had one complaint a week and we’re getting more now in 2017 and it is with regret that I say that. Over half were about mis-selling and the others were about technical or installation issues.

Other complaints included companies claiming that consumers will benefit from government grants for storagem, which do not exist; that the systems would operate in a power-cut when they will not; and that consumers would benefit from additional feed-in tariff payments.

Firms also exaggerated the impact of battery storage on electricity bills, the system’s lifespan and the payback times.

Additionally, RECC registered complaints regarding companies gaining entry into consumer’s homes on false pretences, such as claiming to be ‘servicing a system’,  staying in those homes for longer than two hours, and those targeting vulnerable consumers or pressuring others into signing contracts.

RECC only has the power to deal with disputes against its own members, with any other installers free from industry set standards in the absence of consumer protection in what remains a nascent sector for the UK.

However by extending its code to battery storage and related products the scheme, which covers domestic installs only, is attempting to assert itself across industry in an attempt to counteract the bad practices across the home renewables market,

As well as battery storage units this includes inverters, generation meters and voltage optimisers, which a RECC spokesperson confirmed were also the subject of a number of complaints.

The code is intended to provide customers with all the requisite information they need before concluding a sale. Consumers are strongly encouraged to check with their installer if they are RECC members before purchasing a battery storage system.

In turn, installer members of RECC will gain credibility when marketing to potential customers as the Code regulations are intended to give consumers peace of mind.

Announcing the Code extension yesterday (12 April), Graham said: “We think this is a major step forward for consumer protection in this important emerging sector. We know that there is already mis-selling and confusion among consumers, and we are aiming to ensure that this is avoided going forward.’