The Department for Business, Energy and Industrial Strategy has unveiled a new ‘Smart Export Guarantee’ to replace the export tariff.

Proposals unveiled by the department this morning detail how the guarantee would work in practice, legislating that all large energy suppliers will have to remunerate small-scale generators for the electricity they export to the grid.

The guarantee would see all large energy suppliers – determined as those with more than 250,000 customers – offer generators a price per kilowatt hour for exported electricity.

Government intends to leave these prices down to the suppliers themselves, however all tariffs must be greater than zero and suppliers will not be eligible to recover costs by charging consumers at times of negative pricing.

Large suppliers will be forced to offer at least one tariff, however they will determine the length of any contracts.

Small suppliers will be able to voluntarily join the mechanism but will be held against the same operational requirements as large suppliers. Crucially, there will be no levelisation of costs – suppliers providing an guarantee tariff will be expected to take administration costs into account when setting their tariffs.

In addition, the government has decided that all exports must be metered rather than deemed, meaning that only households with smart meters installed will be eligible for the Smart Export Guarantee.

Suppliers will be tasked with registering eligible installations for the settlement process and settle in accordance with the Balancing and Settlement Code, and it will be Ofgem’s duty to monitor how guarantees are implemented, track deployment and ensure consumer protection standards are met.

On the subject of consumer protection, a series of minimum safety standards for generators with capacities up to and including 50kW will be required, with BEIS holding the MCS registered installer process as one particular example.

‘The smarter the better’

While the SEG legislation would place an obligation on providers to purchase exported electricity, the actual tariff structures being left to suppliers.

However BEIS has dictated that its vision for the tariffs is “the smarter the better”, with the long-term aim of structures that offer export tariffs that track half-hourly settlement prices, essentially reflecting wider electricity system conditions and demands.

Recognising that such tariff designs may not be available immediately, BEIS has published five particular tariff models that may be forthcoming, ranging from a basic export metered, non-variable flat rate tariff all the way to an advanced variable tariff, benchmarked against half-hourly market prices. 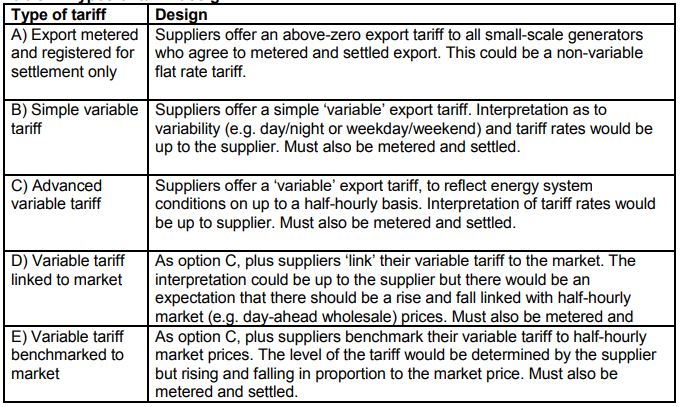 The consultation document seeks views on the most appropriate initial design for the SEG tariff, and the government intends to keep the tariff design under review, encouraging participants to move towards ‘smarter’ tariffs as they become available.

Outside of the tariff structure, contract length and prices are to be determined by individual suppliers. While this is enabling market forces to place a value on exported power – a key requirement of government legislation under its new approach to energy matters – the lack of certifiable revenues could make it particularly harder for consumers to finance installations.

BEIS has also published a draft list of requirements any prospective system would have to fulfil in order to be eligible for the SEG, however these do not differ greatly from the feed-in tariff.

All electricity exported to the grid must, however, be metered rather than deemed, using a meter capable of metering half-hourly export volumes. This essentially limits the SEG to homes and businesses with a smart meter.

While the deadline has passed for all commercial properties in the UK to have been offered a smart meter, the residential rollout remains in its formative steps and has still to reach the level of installations necessary to meet the government’s deadline.

One such alternative to a SMETS-compliant smart meter would be the installation of a standalone export meter capable of providing metered export on a half-hourly basis, however the cost of such equipment – which BEIS estimates to be around £300 – on top of annual maintenance costs of £50 could render the alternative too costly dependant on forthcoming tariff prices.

Crucially, the government would appear to have heeded the advice of industry with regards installation standards. BEIS is proposing that to be eligible for the SEG all installations up to and including 50kW in size must use Microgeneration Certification Scheme (MCS) certified equipment fitted by an MCS-registered installer.

While the government has stated within the consultation that it is keen to stimulate the deployment of storage technologies, it is seeking industry views on the potential eligibility of storage and co-located renewables with the SEG.

While the SEG will make payments for ‘green’ electricity, there is a conflict when batteries enter the equation should they charge using power imported from the grid that is ultimately generated from a non-renewable source. BEIS is questioning whether the SEG should be limited to strictly rewarding ‘green’ power – which may require more complicated algorithms capable of tracking the source of stored power and the installation of more than one meter – and extending the SEG to battery storage technologies considering their intrinsic value to the grid.

The consultation document also includes confirmation that the government expects there to be a “hiatus period” between the closure of the feed-in tariff on 31 March 2019 and the implementation of the SEG. This would mean, as expected, small-scale renewable will be left without a route to market, however government has stressed this hiatus is expected to only last for a “short period of time”.

The government has meanwhile steered that any solar installations completed after the feed-in tariff has closed to new applicants will be eligible to apply for the SEG once it is implemented, but there will be no backdating of or retrospective payments made to generators for any power exported during the hiatus.

The consultation has launched now and is to remain open to responses until 5 March 2019. The full consultation document can be read here, and responses to the consultation can be made online here. Alternative, they can be emailed to futureofsmallscalesupport@beis.gov.uk.

So far, the proposals have been met with a cautious welcome from the industry. Chris Hewett, chief executive at the Solar Trade Association, said the trade body was pleased that the government was unequivocal in its view that generators should be compensated for the power they export, but pointed towards the need for that remuneration to be at a fair market rate.

“Positively, the government again identifies the System Sell Price as accurately reflecting the market value of power spilled to the grid. However, the consultation acknowledges many of the market barriers we have raised with government and the associated costs.

“Our worry is that these may impede the ability of suppliers to offer fair and meaningful rates, even though they may wish to. Customers are freely able to switch suppliers in a competitive market so where these costs fall remains vital to developing meaningful offers,” he said.

James Court, director of policy and external affairs at the Renewable Energy Association, meanwhile said the proposals could “usher in a new era” for small-scale renewables.

“It was clear that no-one should be asked to give away electricity for free, and we strongly advocated for a market based solution and are pleased this approach has been adopted. Whilst the details around the transition from the former subsidy scheme will be important, this signal of support for the sector from Government will help our members continue to provide smarter, cleaner and cheaper electricity in the decade to come.”

However Rebecca Long Bailey, Labour’s shadow business secretary, focused very much on the hiatus period between the FiT and the SEG, describing it as a “new mountain for small scale renewable energy to climb”.

“Rather than a simple flat payment for energy exported to the grid, the government is proposing a hugely complex market mechanism in which large energy companies – notorious for overcharging consumers billions of pounds – can offer whatever sum they deem fit to households. Furthermore, participation relies on possession of a smart meter which, due to the Government’s bungled delivery of the smart meter programme, many households will not have for some time.

“Such a complex scheme will only be accessible to those with the time and resources to negotiate it. Labour plans to roll out solar on the scale necessary to tackle climate change whereas this appears to be a blueprint for hobbyists, condemning solar power to the status of niche industry,” she said.