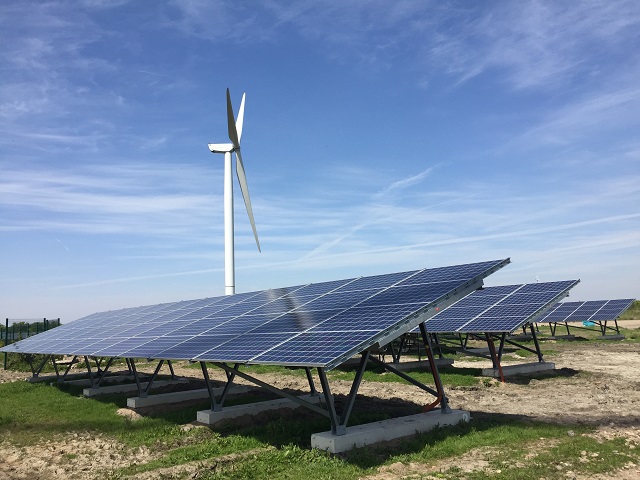 Bristol City Council is celebrating the latest success of its energy strategy after this year’s heatwave saw record highs for solar energy production at its 4.2MW Avonmouth solar park.

The project was installed on the same site as two council-owned wind farms in December 2015 with the generation sold to municipal energy supplier Bristol Energy via a power purchase agreement.

From 1 May to 25 July the site generated 797,112kWh, almost 18% up on same period in 2017. Combined with the nearby wind turbines, the site generates enough energy to power over 4,000 homes and save over 7,000 tonnes of carbon dioxide from being emitted into the atmosphere.

Councillor Kye Dudd, Bristol’s cabinet member for energy, waste and regulatory services, said: “We’re extremely proud of our energy achievements here in Bristol. We were the first local authority to invest in our own large-scale wind turbines and we were able to add a large solar farm to the same site a couple of years later. It’s fantastic that this renewable energy is now contributing to Bristol Energy’s mix and powering homes with clean energy.”

“Our own investment in renewables, low carbon heat and smart energy continues on in 2018 and beyond as we work towards Bristol becoming a carbon neutral city by the year 2050. It’s great to be working alongside Bristol Energy to achieve this ambitious target as well as tackling fuel poverty in our city.”

The site is one of more than 140 renewable energy generators across the UK that Bristol Energy works with to supply its customers, with around 60% of its fuel mix for last year thought to be made up of renewable electricity.

Bristol Energy’s renewables and origination manager Simon Proctor said: “It’s fantastic to see this summer’s solar record, and it’s a real privilege to be working with the Avonmouth team. The performance of renewable energy as a whole this year shows that we really can reduce our reliance on fossil fuels.

“One simple step that everyone can take to support projects like this is to choose green energy to power your home. This helps enables suppliers like us to work in partnership with the people and organisations that are working hard to produce renewable energy across our region.”

The supplier, set up by Bristol City Council to give people a fairer deal on their energy bills with any profits to be reinvested into the local community, offers a green energy deal for customers that includes 100% renewable electricity and 15% green gas.

The latest success of Avonmouth is a latest example of the benefits available to councils from investing in their own solar assets. It follows Forest Heath District Council’s announcement last week that its 12.4MW Toggam Farm solar project had generated more than £1.3 million of income in its second year under local authority ownership.