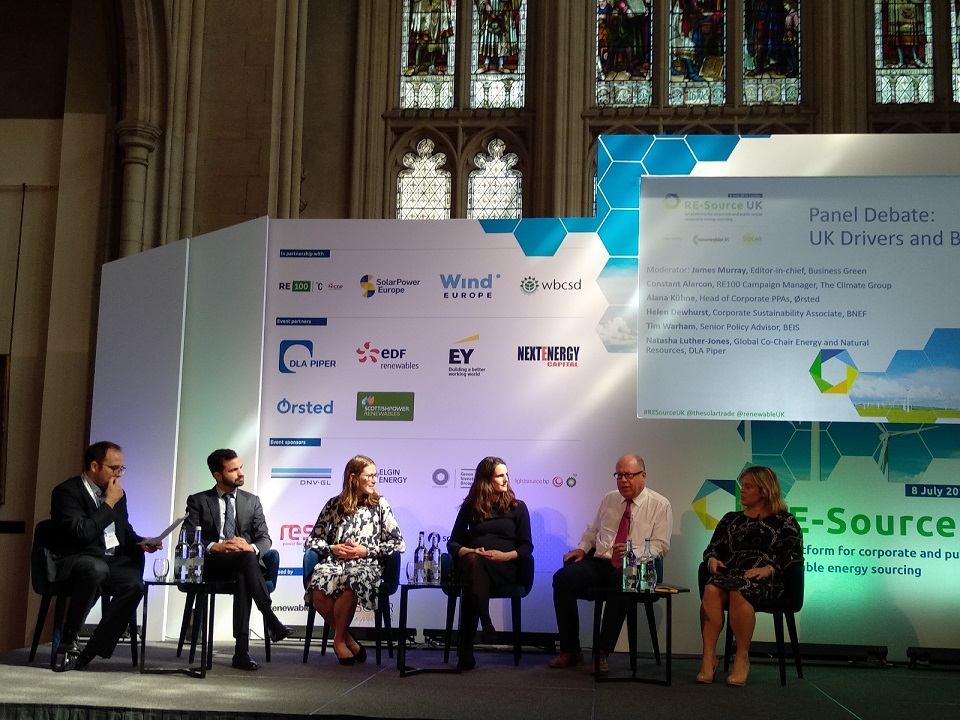 The event at London's guildhall explored the factors be hind the UK's slower uptake of renewable corporate PPAs (Credit: SPP)

Corporate power purchase agreements (PPA) could help the UK unlock a multi-terawatt-hour renewable pipeline if policy and market barriers are dealt with, experts have said at a London event.

PPAs could supply much of the 22TWh UK RE100 signatories have yet to procure if they are to become fully renewable by 2030, BloombergNEF (BNEF) associate Helen Dewhurst said at the RE-Source UK conference on Monday.

Corporate PPA offtakers have so far been equally interested in wind and solar purchases but permitting issues for onshore wind mean solar will be the one “flourishing” going forward, Dewhurt said at the event, held in the City of London’s Guildhall.

The conference examined the factors behind the UK’s slower progress towards corporate PPAs, seen as a key enabler of subsidy-free solar projects worldwide. Comparisons were made with the US, where BNEF estimates 4.3GW worth of PV deals was inked last year, versus the UK’s 182MW.

According to Klassen, capturing such an opportunity will require simpler procurement frameworks and easier access to grid connections. The UK, she concluded, has “more work to do” if it hopes to take the market for renewable purchases to the mainstream.

PPA allies for the net-zero era

There to represent the government was Tim Warham, senior policy adviser to the UK’s Department for Business, Energy & Industrial Strategy (BEIS). He described the new net-zero-by-2050 target as “extremely important” but said the journey will be “more marathon than sprint”.

“We all want things to move faster but the goal is to have a sustainable market environment, where firms can have a long-term view,” he remarked. “Deployment will be enormous as costs come down, especially with solar PV, to the point where it will be an absolute no-brainer within 15 to 20 years.”

The conference analysed how renewable PPAs, the current domain of Facebook, Google and other corporate giants, can become an avenue smaller UK businesses can explore. As several speakers noted, SMEs often lack resources and bankability to become a solid offtaker counterparty.

Constant Alarcon, RE100 campaign manager at the Climate Group, said aggregator platforms can ease the first PPA foray for smaller businesses. The transition, BNEF’s Dewhurst argued, can be smoother if SMEs face lower charges and receive expertise from larger corporates.

BEIS’ Warham argued the UK’s local authorities could be a boon for the renewable PPA scene. “The stake they have, the rooftop spaces they own, it makes them a golden opportunity for solar PV,” he commented. “We’ve seen growing interest on their part to develop their own projects.”