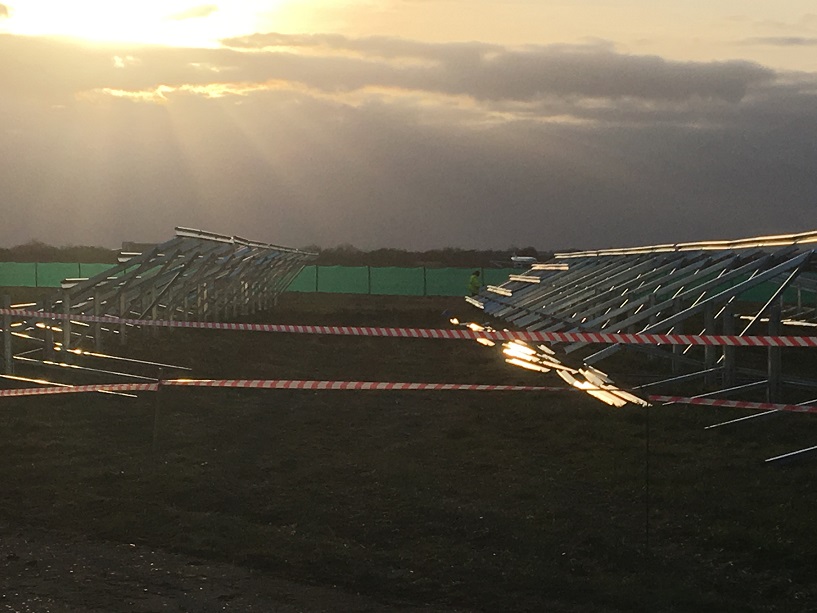 The 1MW solar farm to be completed by the end of the month, will supply all of its generation to Cranfield University via a private wire to ensure compliance with a 0kW export limitation. Image: RenEnergy

The project is fully-funded by the university in Bedfordshire, which secured a £1.6 million loan from public sector funder Salix Finance to put towards the project as well as an LED rollout programme. The university had originally looked to build the site prior to the feed-in tariff cuts in 2015 but was not ready when these were enacted.

According to Gareth Ellis, energy and environment manager at Cranfield University, it is only now that the finances behind the project had progressed to a point where it could be built without subsidy.

"When the government cut that back we had to wait until there was another opportunity,” he told Solar Power Portal.

The ground-mounted array, situated on land owned by the university at Cranfield Airfield, will feed into the University’s main campus via a private wire into the site’s 11kVa network. Around 1,000MWh of solar a year is expected to be generated, contributing over 5% of the campus’ annual energy demand.

All of the generation will be used on site as there is an export limit of 0kW imposed by the DNO, UK Power Networks, via a G100 which limits the net site export to below an agreed maximum on the customer’s side of the connection point.

“All the production of the farm we'll be using ourselves [as] we're not actually allowed to export from this site because of constraints on the local network. That's one reason we went for the size of the system we did.

“[The size] was to do with what our base load is and also we've got a CHP unit on site and we'll be trying to juggle the two together to make sure we don't end up exporting but optimise their outputs,” he said.

The solar project will communicate with the existing CHP via an MODBUS TCP interface to modulate their respective outputs according to readings at the incoming sites incoming supply.

However, as the solar output matches the peak demands of the site, usually in the middle of the day, Ellis added: “It's very difficult to envisage the circumstances whereby our demand is such that the PV pushes us over the edge.

“We've had a number of meetings to see how we will comply with this G100 but in very simplistic terms because of the size of the system, although we're putting in a control system that will ramp the PV back as required, I don't envisage it being used.”

Damian Baker, managing director of RenEnergy, said: “We are all facing energy challenges as we try to balance the demands of growth and sustainability. Solar integrates well into existing infrastructure to provide clean, cost-effective long-term power solution, as is the case at Cranfield, where our solar array will interact with the combined heat and power (CHP) plant onsite to provide energy without exporting to the grid.”

With an expected payback term of 6-7 years, Ellis added that there was “every chance” more solar would be added in the future.

In the meantime, as well as providing both financial and carbon savings, the 1MW site will also provide a key renewable energy research facility for the students.

Feargal Brennan, Cranfield’s director of energy and power, said: “Cranfield has a reputation for providing students with the opportunity to use industrial-scale facilities for education and training support. The solar farm will not only provide a new facility which can be used by students but also a sustainable, reliable and affordable energy supply to the campus.”