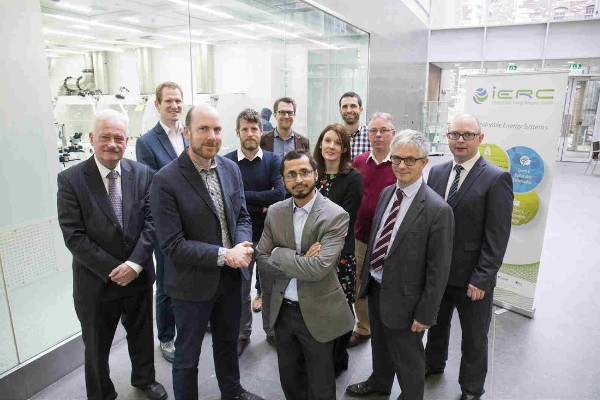 Battery storage and smart technologies are to be rolled out to homes in the Irish town of Dingle as part of a new trial to test their potential to support the use of variable renewable energy supply resources and smart connection to the Irish electricity grid.

Twenty homes will be selected to take part in the €1.12 million (£1 million) StoreNet project, which was officially launched by the International Energy Research Centre (IERC) on Tuesday (12 December) and will last up to two years.

The programme will install residential battery storage systems to operate in the form of a virtual power plant (VPP) in Dingle to integrate with energy supply and demand management and operate at scale across a community.

The project aims to reduce energy costs for residents, relieve pressure on the grid during peak times and contribute to the wider energy transition.

The consortium behind the project - Electric Ireland, renewable supplier and technology provider Solo Energy, and network operator ESB Networks – will select both homes with and without existing solar PV to take part. The project aims to install batteries ranging from 7-11kWh in Q2 2018, with procurement already underway to batteries from different suppliers that could interact with both the grid and solar PV.

Matthew Kennedy, head of Strategy and Business at IERC, told Solar Power Portal: “We will probably select three of four batteries which we would test that are readily available, could work within our grid and the ones that are the most economically advantageous while providing the most output.

“What we're trying to do is learn from the experience of the providers with what has worked and what hasn't as a way of aiding deployment. From a grid services perspective there's a lot of lessons that could be learned.”

Residents who generate electricity from renewable resources on their premises will store excess energy in the battery, and deploy their stored energy rather than energy from the Irish grid during peak times. Additional ‘smart’ charging of the batteries during off-peak times will also aim to relieve pressure on the grid while reducing the cost of supply to the residents.

“With battery storage in domestic installations at a very early stage, this project will provide an in-depth understanding of the application of battery technology, and will provide critical data for possible future battery applications.”

Kennedy explained that Solo Energy will work “very closely” on the virtual power plant and the information system that will link the systems together, while Electric Ireland will deploy an existing monitoring application used in the residential sector to engage consumers in terms of their usage.

“Our control platform allows us to aggregate, control and operate residential batteries across the grid as a VPP to work in harmony with local renewable generation for the benefit of customers, electricity suppliers and system operators alike. The StoreNet project will enable the provision of services to the grid that would otherwise have been addressed by network investment, as well as informing the shaping of such local flexibility markets into the future.”

From a commercial perspective, the project will identify these energy services that can be delivered by a distributed energy storage network and assess the business model in terms of 100% renewable electricity, retail sales and grid services

“The StoreNet Project will allow ESB Networks to test how the smart network of the future will operate with the installation of battery storage in new and existing customer’s premises,” explained Jonathan Sandham, smart networks manager at ESB Networks.

“This project ties in with the recent announcement by ESB Networks that will see Dingle as a demonstration town for new technology and communication projects and will offer great insight into how battery storage can be utilised into the future for the benefit of customers and ESB Networks.”

ESB Networks are focusing on Dingle to provide a number of different demonstration projects within the area, StoreNet being the first. The area was chosen due to the resilience of the local grid, the mixed range of dwellings, the combination of an urban population in the centre with those more dispersed around the town and its geographic location on a peninsula.

ESB Networks already has a team on the ground in Dingle developing a consumer engagement strategy for the StoreNet project, and a number of residents have already put themselves forward to take part.