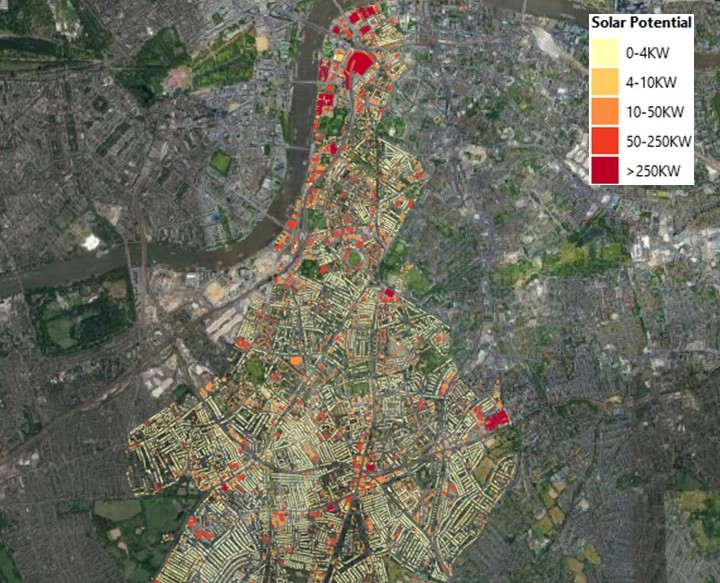 An overview of rooftop solar potential in Lambeth. Image: Energeo.

Data specialist Energeo has identified 40,000 sites that would be suitable for solar development in the London borough of Lambeth.

It found that 40,000 would be suitable for solar development, equivalent to 1,325,000 m2 of unutilised roof area. Should all of these sites have solar fitted, the financial benefit based on electricity savings, export revenue and installation costs could be as high as £179 million over a 20-year lifespan.

Ian Dee, chief executive of Energeo, said: “It’s vital that local authorities make sound, strategic investment decisions for their net-zero initiatives and we’re delighted to be helping Lambeth and other councils across the UK.

“Combining sources such as satellite imagery with digital mapping and other datasets provides granular location information that can help us to choose the best sites for other low carbon technologies such as heat pumps and electric vehicle infrastructure – as well as solar PV.”

Energeo used bespoke algorithms to combine the data and interrogate it, allowing it to assess the solar potential of a roof in the matter of seconds.

As an increasing number of councils across the UK declare a climate emergency, many are looking to solar to help decarbonise the energy system.

Other councils are targeting rooftop solar. In a partnership with Egni Co-op and installer Joju Solar, Newport City Council is set to roll out rooftop solar PV across 21 buildings in the city.

In London, Wandsworth Council has also committed to rooftop solar, and recently announced it will transition to 100% zero carbon energy, following the approval of the Wandsworth Climate Change Action Plan by councillors.

Lambeth is now hoping the survey data will help push the development of solar across the borough.

“Energeo delivered a comprehensive analysis within a few weeks,” commented Matthew Browning, Sustainability Officer of the London Borough of Lambeth, adding: "[This] has given us the ability to make a strong business case for funding and an evidence base – using payback thresholds – for prioritising investment.”