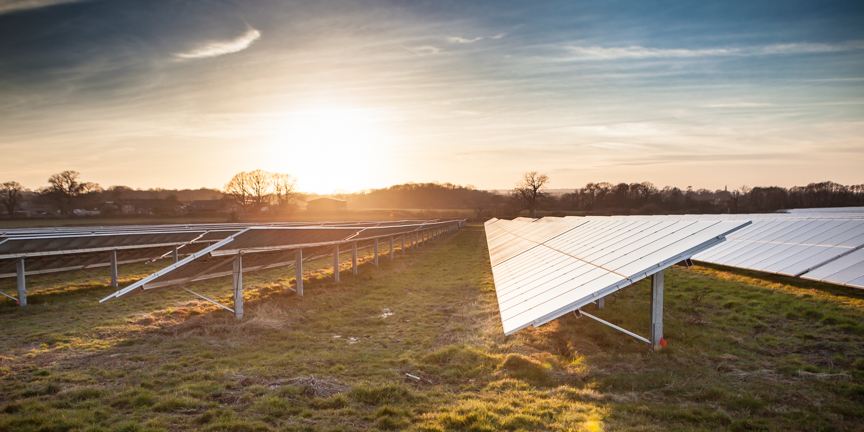 With the Renewable Obligation Certificate (ROC) scheme for UK based solar incentives finishing on 31 March 2017, the domestic sector once again showed its resilience by installing a healthy 640MW during Q1 2017.

Installed capacity was dominated, as expected, by 4.99 MW solar farms under 1.2 ROCs/MWh. In fact, ground-mounted capacity accounted for more than 90% of the quarterly deployment figure.

The rush to connect by 31 March 2017, and subsequently apply for accreditation from Ofgem for 1.2 ROCs, saw an incredible number of solar farms built. Of the 118 solar farms accounting for the ground-mount contribution, 90 of these had capacity in the range 4.5-5 MW. 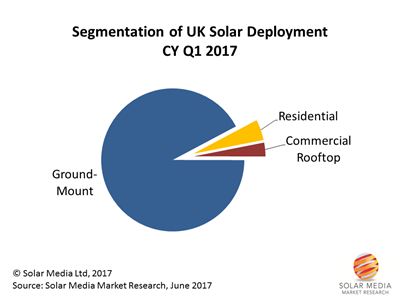 The UK installed 640 MW in the first quarter of 2017, with strong contributions from ground-mounted solar farms.

Consequently, we now have some interesting dynamics at play in the post-build phase following the 31 March connection rush.

Firstly, there is a need to get official confirmation from Ofgem that the 1.2 ROC sites do indeed satisfy all the legal requirements to be accredited. With the additional caveats that were imposed on these sites during the RO solar-specific policy changes during the second half of 2015 (dominated by planning issues), it is likely that some investors will be having sleepless nights until the final documents are received.

The sheer volume of new sites coming onto the market is happening just as trading on secondary asset portfolios has shifted gears on UK solar farms. Short term portfolio holders – that had been diligently building up portfolios over the past three or four years – are currently in sell mode, mostly through choice rather than for cashflow purposes. As we predicted during 2016, one of the most eagerly sought buys will be Canadian Solar’s 150MW portfolio that was carefully constructed over several years in the UK. But there are plenty others that will emerge as it becomes clear that long-term hold was never on the cards. 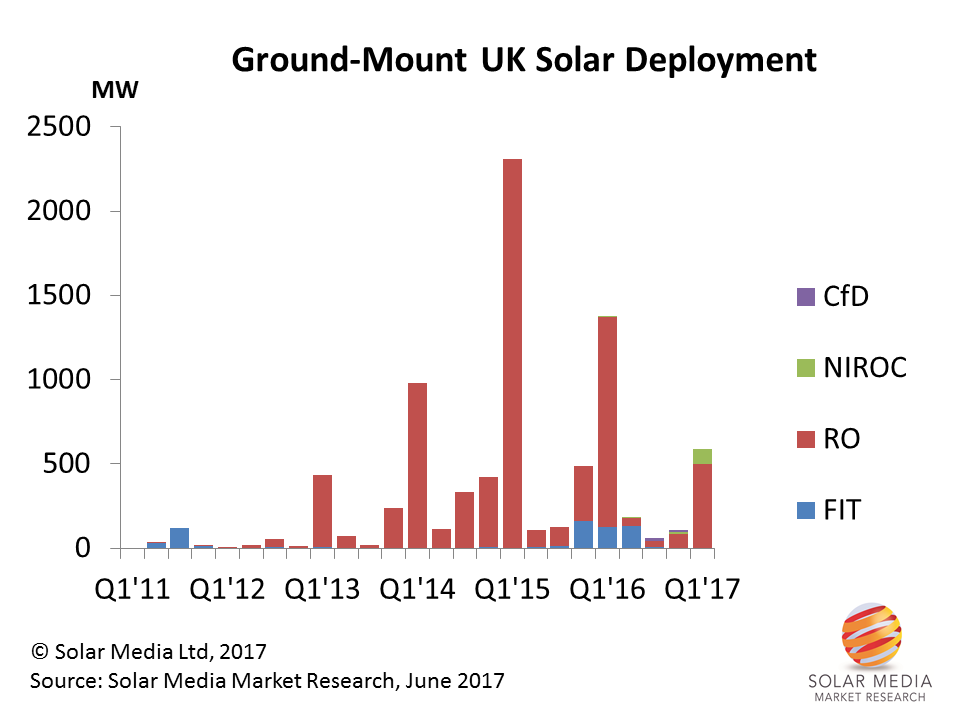 Lastly, we can now see in the market exactly which companies are positioning themselves for the post-subsidy solar deployment phase in the UK, and which ones have decided to call time on UK solar (either UK-based sector-agnostic companies, or overseas companies refocusing on other geographies where solar has incentives on offer).

Either way, the UK is now essentially in post-subsidy mode, both for rooftops and ground-mount. This issue certainly does, more than anything else, consolidate the range of players in the sector. But it also means everything changes in UK solar for everyone left.

In looking broadly over the past 10 years at countries that have prospered on the back of government incentives, only to ground to a halt when subsidies were removed, it is very easy to come to a knee-jerk conclusion that the UK will now follow this trend over the next few years. However, there are some key differences that may set the UK apart in this respect.

In fact, it is probably better to avoid thinking about post-subsidy, or other terms such as grid-parity or levelised-cost-of-energy. Rather, the issue is basically about de-risking upfront investments (Capex), both from a homeowner and institutional investor perspective. Or simply finding what makes return-on-investment work, from a financial and ethical standpoint.

Storage is actually setting the scene for this, with those waiting to have a 25-year government-backed freebie probably going to be left stranded when the market starts deploying in higher volumes shortly.

Both with storage and solar, there is no government hand-out anymore that essentially forms the basis of risk mitigation. Going forward, revenue streams and drivers are far more fluid and short-term, and those driving the market will be the ones that have confidence in being able to adapt site usage when opportunities arise, or looking at multiple sites and the cumulative returns at any given time.

While some will scoff the idea of having anything but gilt-edged security on upfront investment, the more companies that start playing in UK solar and storage over the next couple of years, the more the fear over risk will be lessened.

Because the business model of yesterday does not work with some institutional investors does not mean that the technologies are not viable in today’s climate: it just means that you are running off the wrong business model, or have not worked out yet how to do it.

Knowing exactly what the successful business models are for those driving the next phases of deployment for solar, and storage, in the UK will be absolutely critical in terms of increasing the pool of companies collectively moving the sector forward. Indeed, knowing the answer to this would be gold dust today, as it is essentially the constant question asked from all quarters.

Another promising new trend that we have started to see in the UK is the return of solar farm screening/scoping. When forecasting large-scale deployment, everything starts with screening, and the larger the site, the more likely the need to apply to see if a full Environmental Impact Assessment is required to be submitted before or along with a full planning application.

Since the start of 2017, we have logged over 400MW of new solar farm screening or scoping proposals in the UK, with activity starting to pick up in particular in the past few months. Additionally, the first subsidy-free solar farms are also set to be built in the next six months, all combined with battery storage facilities.

For many seeking to be part of all the new activity, visibility is key right now and knowing who is doing what where, and when, not to mention the how!

Our in-house Market Research is retaining our diligent tracking of solar and storage activity in the UK. All UK solar farms in the pipeline for build-out in the next 12-24 months, or being scoped for planning submission in the next few months, are available in our UK Ground-Mount Opportunity Pipeline report. Full audit trails of all completed UK solar farms are contained in our UK Ground-Mount Competed Assets report, updated constantly with secondary transactions.

For those looking to identify all the storage sites (completed and planned) in the UK, including the pipeline of more than 2.8 GW, our UK Battery Storage Project Database report can be used.

To get more information on these reports, please email us by clicking here.

Finally, I am delivering a free webinar with my colleague Lauren Cook, on Wednesday 21 June at 11am. Please sign up by clicking here. This will cover our thoughts on UK and Ireland solar and storage over the next 12-18 months.