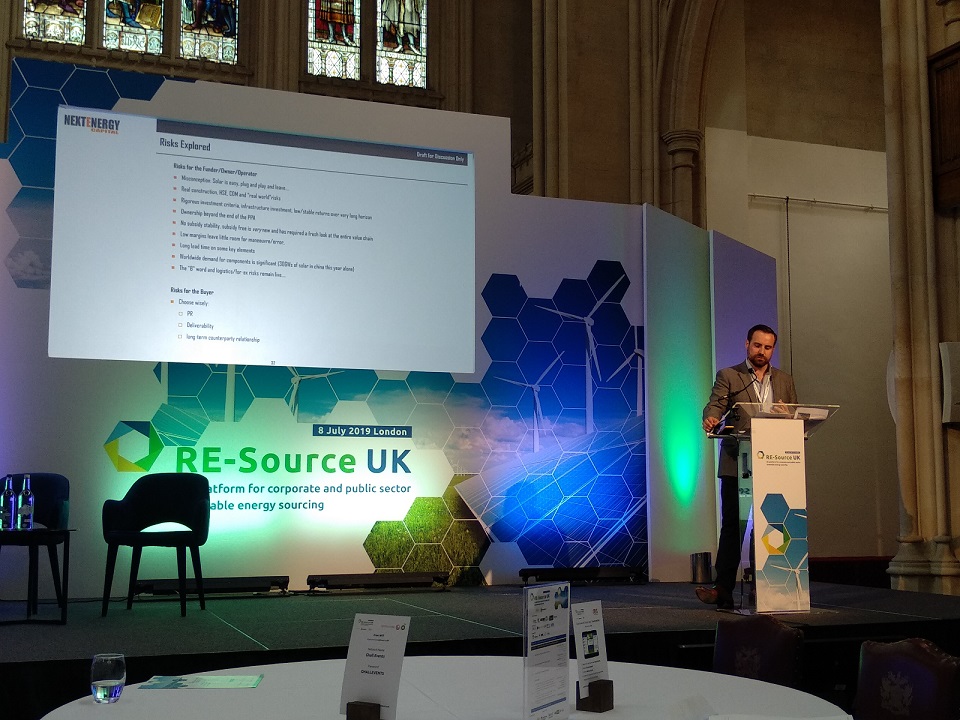 Grier’s policy calls came at an event meant to showcase the potential of solar and others to power the green aspirations of UK corporates (Credit: Solar Power Portal)

UK solar will require a more stable policy environment if it is to deliver projects with the scale required by the country’s net-zero agenda, a subsidy-free developer has warned.

Ross Grier, managing director at NextEnergy Capital, called for more clarity around the targeted charging review (TCR) as he took the floor at the RE-Source UK event in London to showcase his firm’s UK subsidy-free PV projects.

“The lack of a decision [with TCR] is a significant hurdle in our ability to mobilise capacity,” Grier argued. “My plea to Ofgem and BEIS is, give us long-term stability so that we can deliver clean energy to large corporates but also small.”

The remarks see TCR – a reform that would apply fixed residual charges and scrap embedded benefits – come under fresh spotlight. Since it was first tabled by Ofgem last year, the plan has been described as a subsidy-free barrier and a driver of higher bills for UK consumers.

Grier’s policy calls came at an event meant to showcase the potential by renewables, solar PV in particular, to power the green aspirations of UK corporates. NextEnergy, one of Europe’s self-styled largest solar asset managers, updated attendees on its subsidy-free 50MW Staughton project.

NextEnergy – who plans to split the scheme across two sites in Cambridgeshire and Bedfordshire – ran EPC tenders in late 2018, with actual construction following in 2019. By autumn, Grier explained, the project should hit the commissioning stage.

Grier outlined some of the questions NextEnergy is exploring through Staughton, including post-PPA ownership and how subsidy-free value can be squeezed by rethinking the entire project chain. Depending on location, grid connection costs can be “prohibitive” for some plants, he argued.

The managing director issued what he described as a “call to arms” for corporate offtakers. They should, he said, go beyond “just buying power” and embrace PPAs that back tangible, home-grown assets. “Let’s look into genuinely improving the UK network,” Grier added.

A decade of change

The RE-Source UK get-together takes place at a time of change for UK solar, undergoing the same subsidy-free transition observed in other major European PV markets. Having witnessed a closing of feed-in tariffs on 1 April, the industry is now working on a soaring unsubsidised pipeline.

Speaking to conference-goers at London’s Guildhall, Grier described the evolution he has himself witnessed since entering the industry a decade back. The shift from 25-year to 30- or 40-year plant lifespans will change conversations around pricing and PPA structuring, he said.

Grier sought to dispel a “misconception” he said continues to plague solar. “The fact it’s simpler doesn’t mean it’s easy to deliver,” he argued. “I’m fascinated by how the industry has worked around obstacles and found the way, which we’re doing again with subsidy-free projects.”