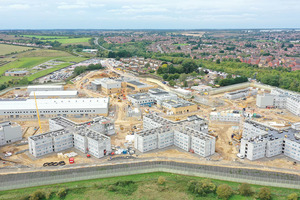 Lessons will be learnt from the construction of other prisons in the UK currently such as HMP Five Wells in Wellingborough, Northamptonshire (pictured) to help cut carbon in both construction and operation. Image: gov.uk.

The Ministry of Justice is to develop thousands of solar panels across four new prisons being built in England.

It has announced that the new sites will be ‘all-electric’, utilising heat pumps instead of gas for heating, a range of energy efficiency measures such as smart lighting and solar technology in order to reduce energy demand.

Over the next 60 years, this is expected to cut £100 million in energy costs, as well as reducing carbon emissions by 85% compared to other prisons already under construction.

The first prison will be built next to HMP Full Sutton in East Yorkshire, while work is underway to identify locations for a further site in the North-West of England and two in the South-East.

All will additionally benefit from carbon emission reductions thanks to the use of recycled concrete and steel in construction, learning from the construction of HMP Five Wells in Wellingborough, Northamptonshire, and the new jail in Glen Parva, Leicestershire, both of which are utilising recycled materials.

When the grid is fully decarbonised, the prisons' use of both self-generated power and the grid for heating and electricity will mean they can run net zero.

“New jails will use new green technologies and modern methods of construction to ensure our prisons cut carbon emissions as well as reoffending.”

These new build sites form part of wider efforts to decarbonise prisons, with existing sites seeing £15 million in investment to cut their emissions. Solar panels are being installed at a further 16 sites across the UK in order to meet 20% of power demand, bringing the total number of solar panels across the government’s estate to over 20,000.

In February, Gov Facility Services announced it was installing solar on two prisons in Southern England, with a rooftop installation at HMP Bure near Norwich in Norfolk and a ground-mount installation at Whitemoor Prison in Cambridgeshire.

This push by the Ministry of Justice to rollout solar follows the quiet closure of a government solar initiative in 2018, after just 100MW of a promised 1GW was installed across HMG property.