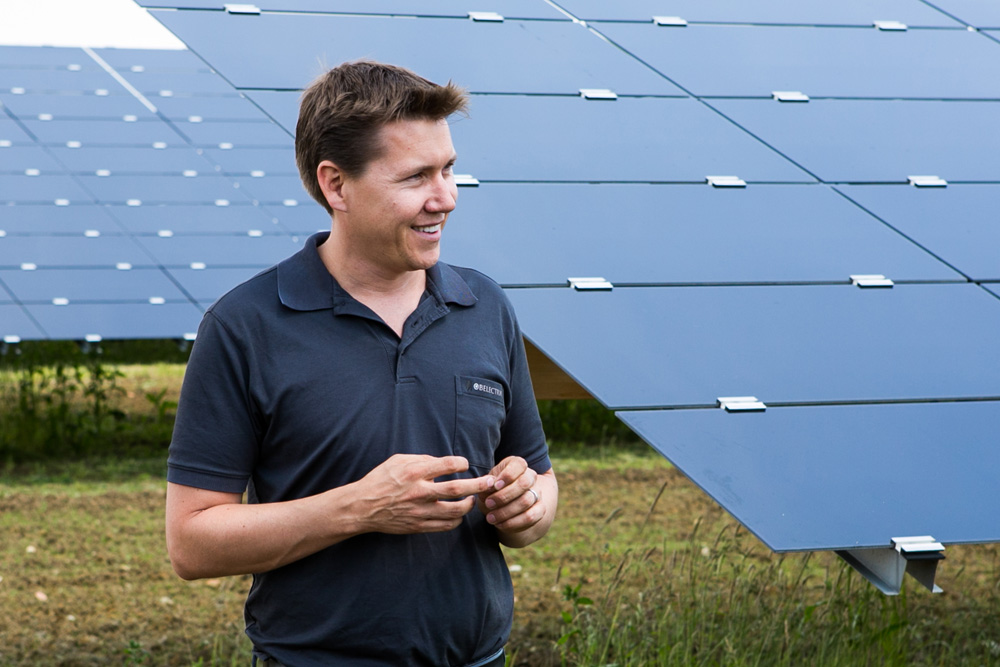 GRIDSERVE has unveiled that it is to start construction on a 37.4MW solar farm and 27MW battery storage project imminently, in what is being billed as the UK’s most technologically advanced solar farm to date.

As well as being built without subsidies, the solar farm will be the first in the UK to use bifacial modules and single-axis trackers, indicating two potentially significant trends for the utility-scale market moving forward.

Once complete, the site will be purchased by and supply 100% of the energy demand of Warrington Borough Council, in yet another significant milestone for the UK solar sector.

In addition, a second, 25.7MW solar farm is to be constructed soon after, taking GRIDSERVE’s solar build-out for this year to 62MW.

GRIDSERVE reached financial close on the projects last week with Investec Bank and Leapfrog Finance agreeing to fund the construction of the two solar farms.

The first, hybrid solar project is to be built in York while the secondary solar farm is to be constructed in Hull, and Warrington Borough Council will pay £62.34 million for the two assets, taking ownership when they are operational.

GRIDSERVE meanwhile will remain on board and provide operation and maintenance services for the projects over their lifetimes.

The projects will be unique to the UK by using bifacial p-mono PERC modules, provided by Suntech, allowing the farm to generate power from both sides of the panel. They will also be the first large-scale projects in the UK to use single-axis trackers from NextTracker to maximise its generation and minimise price cannibalisation.

Combined, the two technological innovations are forecast to boost generation by 20%.

The 27MW lithium-ion battery storage system at York will be the largest at any UK solar farm at the time of completion and will share the site’s grid connection. GRIDSERVE is to use the battery to store and get more advantageous pricing for the solar farm’s output and provide grid balancing services to National Grid.

A second battery storage system is earmarked for the Hull site during a later phase.

Toddington Harper, CEO and founder at GRIDSERVE and former chief exec at Belectric UK, described the projects as the “most advanced” in the UK and said they stood to “usher in a new era of subsidy-free, truly sustainable energy”.

“We’ve completely rethought the solar model, looking in detail at how to maximise value at every step, and these projects will also pioneer the use of cutting-edge technologies that serve the grid,” he said.

Harper said that Warrington was “leading the way” in showing councils how solar and battery storage can combine, generating sustainable income to deliver public services while supporting a low carbon economy.

While other councils and local authorities have made forays into the solar market, none have yet shown the ambition to develop or purchase projects of this scale and magnitude.

WBC expects the projects to cut its energy bills by as much as £2 million each year. In addition, GRIDSERVE is to make a £100,000 contribution to fund specific intiatives in the area to top up an £85,000-a-year fund which will support local community benefit projects in Warrington.

Electricity from the solar farm in York will initially be sold on the spot market, however GRIDSERVE said a number of local authorities had already expressed an interest in purchasing the power under a PPA arrangement.

Councillor Russ Bowden, leader of WBC, said the deal was good news for Warrington residents. “The solar farms will secure our energy supply, give us control over our energy prices, contribute to reducing fuel poverty and generate an estimated operating surplus of £150 million over 30 years that can be invested back into the most important frontline services.

“Councils have a major role to play in helping to meet carbon emission reduction targets. These two sites are a working model that we hope other local authorities will follow.”

A ‘future blueprint’ for UK solar

Finlay Colville, head of market research at Solar Media, has been tracking the sites as they have progressed through the planning system.

“Aside from the addition of storage batteries, the most interesting aspect is certainly the new site design using p-mono PERC bifacial modules and single-axis trackers. When the UK experienced its first ground-mount boom, developers went for the lowest cost capex in plant build, using 60-cell poly panels on fixed mounting arrangements. In many ways, this mirrored the approach done in many global markets, and back then it was the most bankable route to solar farm execution.

“Today is totally different, and the UK’s barren phase of solar farm build has overlapped with a technology revolution in manufacturing that has been going on. Maximising yields is now about 72-cell mono panels with dc-power ratings above 370W, the use of bifaciality where both sides of the panel absorb sunlight, and low-cost trackers. The increase in capex more than pays in terms of yield and ROI. It used to be this type of arrangement was confined to high-irradiation, near-equitorial parts of the globe: not any more.

“While other planners are active now in the UK developing new sites and scoping land for future deployment, the sites redesigned by Gridserve in the past year are the only examples of a UK-based developer taking advantage of the current state-of-the-art utility-build practices. Others will of course follow, in particular sites such as the mega-scale Cleve Hill, whose plant design will naturally go through more rounds of amendment, and anything that can reduce the footprint on a 350MW solar farm is only going to be greeted with joy when meeting final planning objections.

“Once the first of Gridserve’s sites is built, it will certainly be the blueprint for other UK solar farm developers, with many flocking to the local authority planning portals to download the newest site plans posted.”