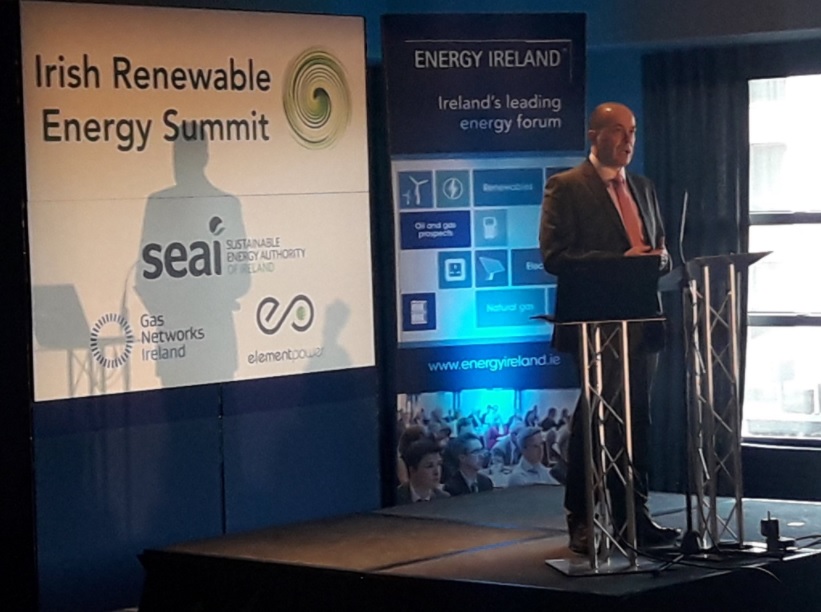 Ireland is to pilot a domestic microgeneration scheme for solar PV this summer according to climate minister Denis Naughten, opening the potential for funding outside of the Renewable Electricity Support Scheme (RESS).

When details of RESS were published back in September, the Department of Communications, Climate Action & Environment (DCCAE) excluded micro-generation from support under RESS on the grounds that such a scheme would not prove cost effective in meeting Ireland’s renewable targets.

In a speech at yesterday’s Renewable Energy Summit 2018, Naughten reiterated this decision and said that it would be “reckless” to ignore the experiences of other countries that have already implemented schemes and have since needed to reform them.

However following proposals to recast the European Commission’s Renewables Directive which included measures to remunerate micro generators who feed self-generated electricity into the grid, the minister stated he was “committed to supporting this”.

“It is my intention to open a grant aided pilot scheme this summer for solar PV microgeneration, targeted initially at self-consumption and for domestic properties,” he said.

Details on the grants to be made available, location or the scope of the pilot remain unclear, with a DCCAE spokesperson telling Solar Power Portal this morning: “The plans are there, it’s in the department’s thoughts [but there is] no solid timeframe at this time.”

Final design of RESS "by Easter"

However, Naughten did provide an update on the progression of the RESS consultation, which received over 1,250 submissions.

The minister expects to receive a final design of the new scheme “by Easter” (1April) before presenting it to the Irish government for approval.

“Subject to Cabinet and European Commission State aid approval, we will hold the first renewable electricity auction in Ireland next year,” he added.

This timeline matches that outlined by Anthony Doherty, group corporate finance director at NTR, at this week at Solar Finance & Investment Europe who said the first projects would likely be built in Q1 2019.

Also speaking on the subject of opportunities in the fledgling Irish market, Amarenco chief executive John Mullins said only 300MW of the current pipeline is likely to be built owing to growing difficulties in the planning system.

However, Naughten yesterday claims that the “separate, ring fenced community category” of the RESS was “particularly significant for me” and would provide opportunities for communities and citizens to take part in renewable electricity projects.