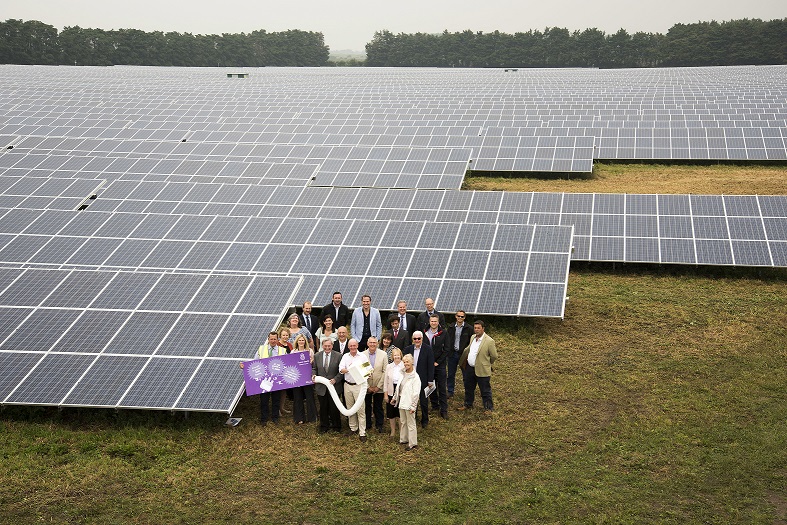 A Suffolk local authority has become the owner of one of the largest council-owned solar farms in the country after using capital reserves to purchase the Toggam Farm solar farm, in Lakenheath.

Forest Heath District Council finalised the purchase of the 12.5MW site on 19 August for a fee of £14.5 million. The council says the solar farm, which began generating power in June, will bring in £300,000 in the first year from renewables subsidies, even after the capital outlay has been recouped.

This is expected to rise to just over £700,000 per year after a decade, bringing in millions for the council over the 25 year project.

Cllr Stephen Edwards, Forest Heath’s cabinet member for resources and performance, said: “The way councils are financed is changing – our main government grant will be scrapped by around 2020 and council tax doesn’t cover as much as people think. This means we have to look at new ways of investing to make money to pay for services.

“In the future, the solar farm could provide energy to West Suffolk councils’ offices and our leisure centres, helping us and our partners to save money on energy costs on top of the income it will bring in, while further down the line there may also be opportunities to benefit our communities as well, although this is dependent on the energy market.”

The sale means the local authority takes over ownership of Greenheath Energy which completed development of the farm earlier this year.

Thomas Clayton, developer and director of Greenheath, said: “We are delighted to announce the completion of the purchase of Greenheath Energy by Forest Heath District Council. The solar farm is up and running, producing renewable energy and will now be generating income to assist the council in continuing to provide excellent services.”

The purchase of the site was made possible through use of the council’s capital which is only available for investments which can generate an annual return.

Despite these budgetary issues, councils are repeatedly turning to solar to make a return on their investments, generating income for themselves and local residents. Speaking in April at the Solar Power Portal roadshows, Nottingham City councillor Alan Clark explained that councils across the country have these funds available for investment in renewables.

Forest Heath District Council is already looking to follow up on the sale with plans to become a local energy provider, assuming government is amiable to its goals.

Edwards added: “We plan to lobby the government to relax charges over the generation and supply of energy to local markets. If successful that could allow us to offer our own branded tariffs to local businesses, providing them for the first time with stable energy supply costs, which in turn would help support local economic growth.”

According to council leader James Water, Forest Heath will continue to look to develop solar schemes through Greenheath Energy, particularly rooftop installations. Despite the reduced subsidies now available to the technology, he added that the benefits of solar mean it will remain an attractive investment opportunity for a range of groups.

“Solar is very beneficial and very low impact. I’m sure there are plenty of councils alongside commercial businesses and community groups that need to be looking at that - anything low carbon. I don’t think solar has had its day yet, even though they’ve knocked the tariffs,” he said.