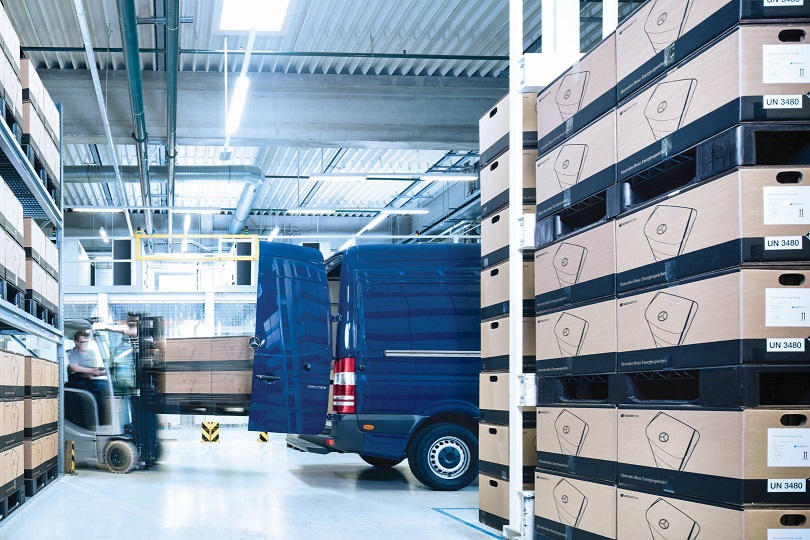 Mercedes-Benz Energy Storage Home is being shipped to a network of UK installers and distributors through its Daimler subsidiary. Image: Daimler.

Mercedes-Benz Energy has begun exporting its home energy storage systems to the UK as part of a wider international push into new markets outside of Germany.

The expansion follows significant investment last year in the development and production of stationary storage systems through Daimler and its subsidiary Deutsche ACCUMOTIVE, including an investment of EUR500 million in a battery factory in Kamenz, Germany.

The lithium-ion system offers up to eight modules each with a capacity of 2.5kWh, which the company claims can be scaled up to a maximum of 20kWh to suit the individual needs of customers. However a Mercedes-Benz sales briefing states only 18kWh can be achieved, with the company unavailable for clarification.

Due to this scalability, Daimler says the system could be used by both homeowners and in large-scale commercial and industrial applications.

The system is generally intended to be installed together with a solar PV system, with the intention of allowing homeowners to increase their self-consumption of generated energy, which Daimler says could reach as high as 65%.

According to Mercedes-Benz, the expected battery lifetime of its Energy Storage Home units is rated at 8,000 charge/discharge cycles and charge retention after ten years in use at 80%. The system is said to come with a 15-year warranty on parts with a 10-year current value replacement guarantee.

Rolf Oldach, technical director at Photon Energy which has recently been certified as an installer of the Mercedes-Benz system, said the battery should have no problems integrating with the UK energy system as the approved inverter, SMA’s Sunny Island, has been used here for years.

Mercedes-Benz Energy also has smaller networks of installers in Belgium and the Netherlands and Austria.

Harald Kröger, head of development electrics/electronics and e-drive Mercedes-Benz Cars, said: "There is tremendous interest in our energy storage units and we have already received numerous orders. Over the coming months, we will continue to step up and expand sales both in Germany and on the international market.”