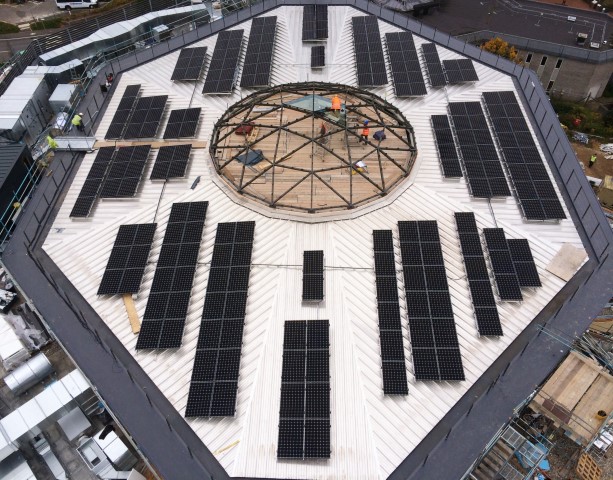 Bournemouth University has installed a 95kWp solar system atop its new £22 million academic ‘Fusion Building’, which will provide it with more than 100,000kWh of electricity each year.

Renewables installer Photon Energy was brought on to the project by the main contractor Willmott Dixon and installed a total of 276 SunPower 345W high efficiency modules alongside SMA 3 phase inverters.

The majority of the modules were mounted using K2 aluminium frames on the octagonal standing seam roof, while the remaining 70 modules were mounted to a bespoke framing system on the top level flat roof of the building for them to be integrated with a plant room screen.

Black SunPower modules were chosen to blend with the design of the plant room screen.

Abu Luswata, project engineer at Photon Energy, said the company was pleased to complete the project on time given a variety of challenges faced by the installer.

“In addition to the design challenges, we had to ensure the health and safety of our operatives who were coping with some particularly windy weather running up to completion in December 2015,” he said.

The system is forecast to generate 102,060kWh of electricity each year. Its performance will be monitored by the university via SMA’s ‘Sunny Portal’ system, which will also be made accessible through the university’s own intranet.

The Fusion Building is a new, state-of-the-art development which is the centrepiece of the Bournemouth University campus. It was opened in September this year and includes 27 seminar rooms, three lectures theatres, research space and a computer laboratory.