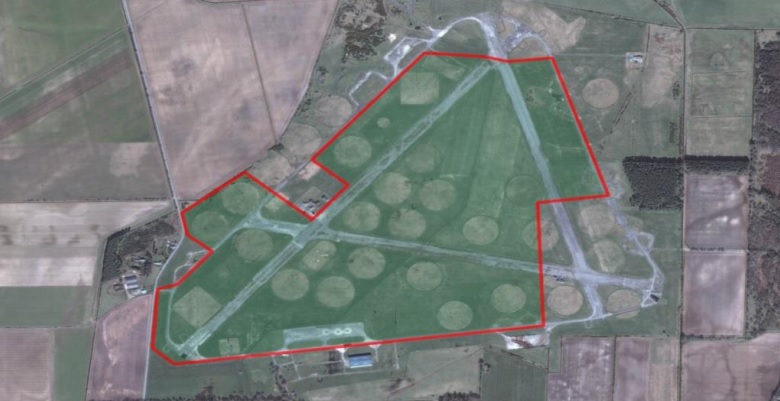 Elgin Energy has submitted plans for a subsidy free solar farm on the site of a former airfield in Scotland which if approved would see the site boast more than 50MW of capacity.

The plans submitted to Moray Council would see around 200,000 solar panels deployed on approximately 115 hectares at the former RAF Milltown Airfield, around four miles north east of Elgin.

The documents state that as the proposed development will be completed post-subsidy, it needs to utilise a significant portion of the airfield in order to be commercially viable. Elgin Energy said that the capacity should therefore be considered as “symptomatic of the changing support regime for projects of this kind”.

Original plans submitted in December 2015 placed the capacity at less than 50MW however rising levels of panel efficiency have increased the output of the site to the point where it needs sign off from Scottish government ministers.

If approved, Elgin expects to build the site in 12-16 weeks, after which it will remain for the 30 year lifespan of the project. However, the subsidy-free nature of the project means the construction and energisation date are said to be predominantly dependant on the forecasted capital costs, electricity prices and technological advances.

In order to accommodate this, Elgin has requested that any permission for the project allows for a five-year period of commencement.

As the airfield ceased operating flights around 40 years ago, the developer has argued that an unused site of such size should be considered as potentially appropriate for this development.

No other suitable sites for a 50MW solar farm were found in the area – the second largest opportunity site identified in Elgin is just 30 hectares – and the plans argue that Moray Council should support proposals like this on unused land to advance its economic strategy in support of renewable energy.

Once completed, the project would deliver enough power for around 15,000 households while retaining its current agricultural use in the form of sheep grazing.

Elgin also recently submitted plans for a post-subsidy solar farm back in June, which would see a smaller site between 20-50MW built nearby at Urquhart. Both proposals are awaiting decisions from Moray Council.

A number of subsidy-free sites have already entered the planning process, with larger sites in the range of Elgin’s proposed sites expected to become the norm. According to Finlay Colville, head of market research at Solar Media, economy-of-scale economics will become a key driver for return-on-investment metrics.

For more on the growth of subsidy-free solar farms working their way through the UK planning system, read Colville’s full blog here.