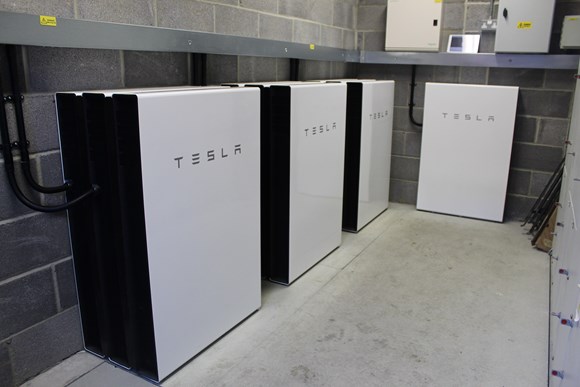 Portsmouth City Council has celebrated the completion of the largest operational Tesla Powerwall installation in the UK as part of a 250kW solar system installed on its Hilsea Industrial Estate.

The new solar installation compliments the existing 50kW system at the site, making it the biggest single solar and battery installation for the council to date. There are 738 solar PV panels installed alongside a ten-unit battery system capable of storing 135kWh of electricity at any one time.

Together, the solar PV and storage solution will reduce the site's reliance on grid-bought electricity by almost 50% according to the council.

It was installed by one of Portsmouth City Council's solar PV framework contractors, Evo Energy, and project managed by the City Council's in-house energy team.

Mike Salisbury, managing director of Evo Energy, said the company was “extremely proud” to be working with the council on such an "exciting and innovative project".

“Bringing together cutting edge battery technology alongside solar PV to deliver for businesses increased financial savings will help them to achieve real net zero, and reduce their reliance on the national grid.

“This is the future for renewable power in utilising otherwise unused roof space local to the user and turning it into a green energy generator."

The Hilsea Project is the latest completed by the council, with 13 housing blocks already having Tesla Powerwalls installed and a further 20 on the way. As the first site to see multiple storage units used however, it is the largest and is expected to reduce carbon emissions by 69 tonnes a year, as well as reducing running costs significantly.

Portsmouth City Council is targeting net zero by 2030, with solar and batteries seen as key technologies to deliver this. In 2016 it committed to a £10 million rollout of PV panels to help reach this point, which allowed it to celebrate a record amount of generation during the COVID-19 pandemic with the council’s solar panels, siting on schools, offices, community centres and housing sites, generating 1.3GWh of power.

Cllr Dave Ashmore, the council’s cabinet member for environment and climate change, said it was fantastic to see them leading the way when it comes to “innovative projects” like Hilsea Industrial Estate.

“Not only are we producing and using our own renewable energy but projects like this dramatically reduce the council's ongoing energy costs. The council has been clear in setting out its plans in tackling climate emergency and it's fantastic to see projects like acting out these plans."