During this week, we have counted down the Top-20 lead EPCs to the UK market, down to number 2 yesterday. We are now in the position to reveal the number 1 company.

Similar to the blogs on Solar Power Portal during this week, we will also provide a discussion on the strategy of the leading company, and offer some other facts and figures for the Top 20 as an overall grouping.

Without any further delay, the leading EPC to the UK solar market today, by cumulative installed solar PV capacity, is – by some margin – UK-based Solarcentury. The full list of the top-20 EPCs is shown in the figure below. 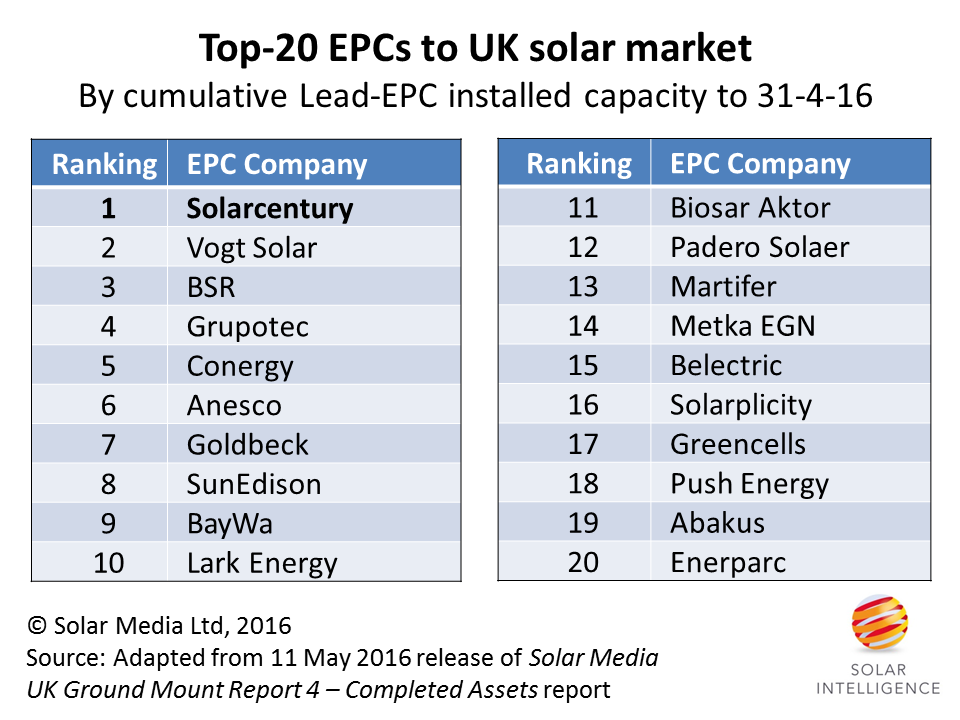 Top of the Top-20 EPC league table in the UK is Solarcentury, having been actively engaged in UK solar some ten years before the start of FiTs back in 2010.

While there are many factors behind Solarcentury’s lead ranking position, it is perhaps fitting that the top company is UK-based and has been a key voice in policy decisions and trade body strategies over the years, the success of which has often created opportunities for its competitors, many of whom feature also in the Top 20 EPC table.

Solarcentury started installing solar in the UK back in 1999, and by the time the country’s FiTs were established in 2010 had installed 50MW, almost all on rooftops under the various schemes that had been available in the UK at the time.

Very quickly, the capability was put in place to allow for EPC activities on solar farms. During 2011 and 2012, the company was mainly engaged as an EPC, but then shifted upstream to project development with an almost perfect success-rate of site approvals and completions as EPC.

From the middle of 2014, the strategy became more fluid, with an increasing percentage of efforts based on the original model of being the EPC of choice to established developers and completed site asset owners.

Second only to Anesco in the number of solar farms built in the past five years, Solarcentury has been perhaps the most adaptable and flexible installer in the UK, maintaining a healthy output of small and large rooftops to add to solar farm builds.

Like Anesco and a small handful of other developers/EPCs, Solarcentury has also been a key driver of the community solar growth seen during 2015 and 2016, and can be seen to be the EPC-of-choice to various community projects that typically require the EPC to take on much of the planning issues before, during and after site completion.

By concentrating its efforts upstream (in part development, but mostly at the EPC stage), it has likely made the company more efficient and capable of taking on EPC work in the UK, as opposed to other companies in the Top 20 list that spread resources and finances across building and owning sites.

While the company has made perhaps the most significant contribution to solar PV installation growth in the UK going back to 1999, the role of the company will be pivotal to how the UK as a whole performs once the FiTs and ROCs become a thing of the past.

With so many different business models being pursued across the different lead EPCs making up the Top-20 listing, it is rather difficult to segment them across clearly-defined descriptions. However, let’s try to make some sense of the companies.

The easy one to pull out is installed capacity by HQ-region. Here we can think about three regions, rather than countries: UK-based, Germany-based and a third where we collect together companies based in Spain, Portugal and Greece.

The graph below shows the capacity installed by these three regions. 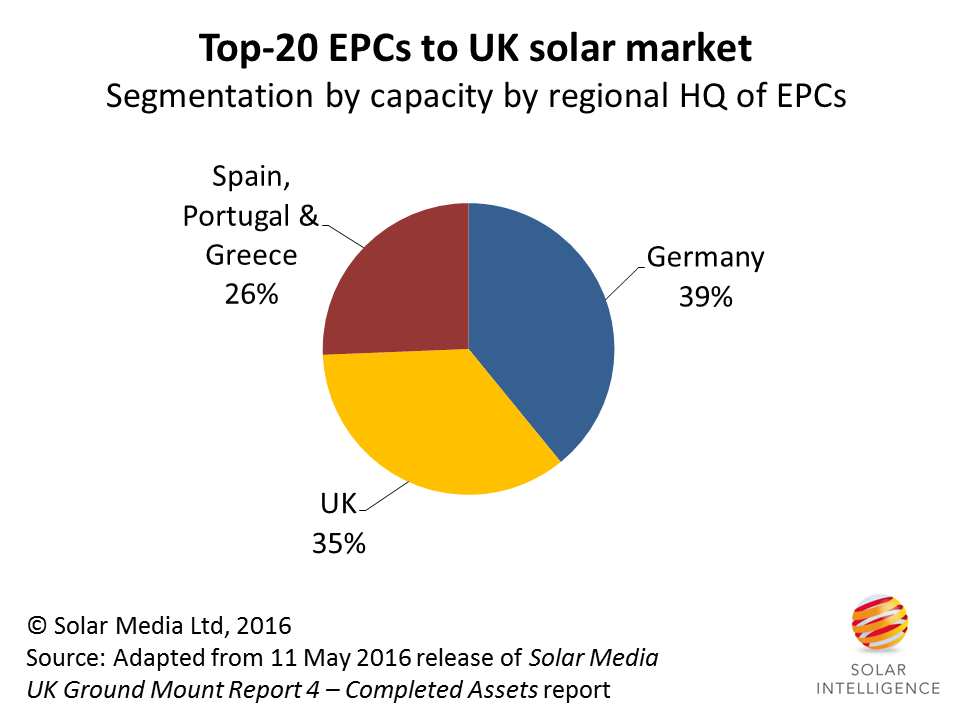 EPCs based out of three main countries/regions make up the full Top-20 EPC league table, for the UK, where SunEdison’s UK operations are effectively categorized by being a Spanish-led activity.

The graphic shows clearly the leading contribution from German-based EPCs, with almost 40% of installed capacity. Collectively, adding in the capacity from the Spain/Portugal/Greece Southern Europe grouping, mainland European EPCs have installed about two-thirds of solar farms in the UK.

Another way of grouping the companies is by value-chain participation. Here we can group as: Dominant Pure-Play EPC (essentially as close as we get to third-party contract builders), Upstream-Focused Developer/EPC (by default not having any clear strategy to hold projects, other than the time it takes to secure buyers), Downstream-Focused EPC/Asset Holder, and Fully-Integrated Developer-to-Portfolio Players. While far from an exact science, it is a relatively good way of seeing some further trends underpinning the group of EPCs in the Top 20 listing. 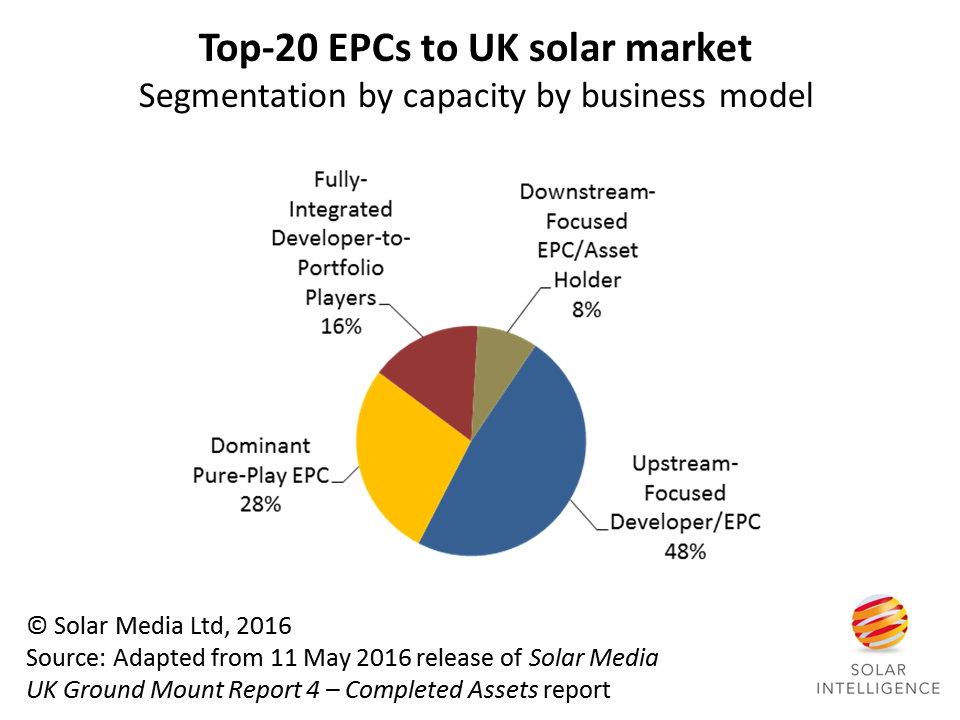 EPCs to the UK solar market have been active across different parts of the value-chain, with four categories summarizing the company’s strategies in the UK.

The most successful model employed by EPC-capable companies within the UK solar market has been from those getting involved at the initial planning process (or acquiring approved sites), doing the lead EPC work in-house, and then flipping SPVs to third-party portfolio asset holders. This accounts for almost half of the installed capacity from the Top 20 EPCs.

The next most popular route (largely from the Spain/Portugal/Greece EPCs) is as a pure-play EPC, brought in (often at the eleventh hour) to arrive in the UK, build a site, and then move on to the next one. About one-third of the installed capacity from the Top-20 is from this route.

More generally however, perhaps the single attribute that can cover all the companies is one of perseverance, and working within a context of rapidly-changing policies and frequent deadlines. Building a 5MW FiT site in Cornwall in 2011 must seem to many far removed from rushing a 2014 1.3ROC grace-compliant project in the 40-50MW range to grid-connect ahead of the end of March this year.

And for those companies holding and owning assets, being able to maintain company operations as the value of sites cycles every few months, depending on whether the market for completed solar farms is basically a buyer’s or a seller’s market.

All said, while the basic intention was to perform a highly methodical and accurate bottom-up analysis of the dominant segment for solar PV in the UK, what has emerged has almost been a series of blogs that summarises the history of solar PV in the UK until today, with some key findings that will define the segment to 31 March 2017 and thereafter. In this context, it has been a fascinating and timely exercise for our team at Solar Media Ltd and Solar Power Portal, and one that we will undoubtedly return to, once we get through the RO incentive phase.

What the Top 20 EPCs will look like when the UK breaks through the 20GW barrier is, as they say, for another day!

We have flagged during the week that all the data used in the Top-20 EPC methodology is contained within our Solar Media UK Ground-Mount Report 4 – Completed Assets report that includes a full audit trail of completed solar farms in the UK, with updated releases delivered to subscribers each month.

While this report is essential reading for those looking to understand and benefit from completed solar sites, perhaps of even more interest is our Solar Media UK Ground-Mount Report 3 – Opportunity Pipeline report.

This contains a comprehensive and daily-updated prospect list of solar farms that could still be built out under FiTs or ROCs over the next 10 months. With this list declining every week, and not being replenished owing to the 22 July 2015 planning deadline, all suppliers to solar farms, not just EPCs, can simply not rely on waiting for legacy developers or customers to maximize opportunities.

Report 3 is designed to provide this information to the UK solar industry, with our in-house team’s daily updates being supplied to report users every two weeks. Please contact John Browne at Solar Media for more information, by using email hyperlink here.