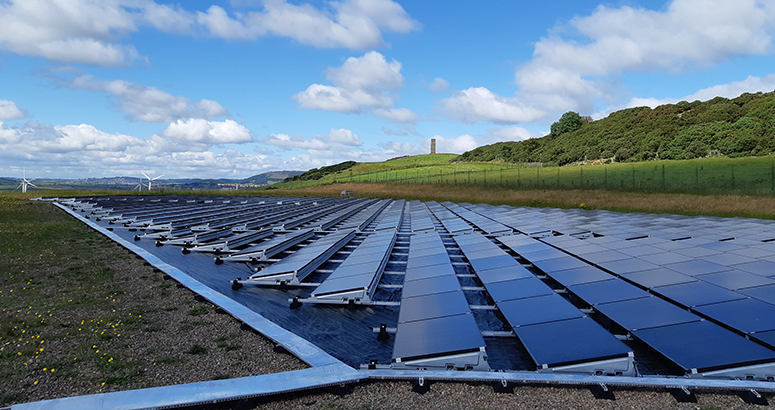 Scottish Water has continued its push to decarbonise its operations, with the completion of a new solar PV system.

The Finmont Service Reservoir, near Lochgelly in Fife has been fitted with nearly 1,000 solar panels to help offset a quarter of the electricity needed for the site.

Scottish Water Horizons, a commercial subsidiary of the water supplier, invested £325,000 to fund the installation of the 297kW system, which is set to generate 0.25GWh annually.

The company is aiming to be net zero by 2040, with 75 of its water and waste water treatment works now being either self-sufficient or partly sufficient in their power requirements. It is targeting hosting or self-generating three times its annual power consumption by 2030.

“The energy needed to provide customers with essential water and waste water services makes Scottish Water the largest single user of electricity in the country. We are committed to finding alternative ways to develop and accelerate green energy schemes to reduce that carbon footprint."

The installation was completed by FES Support Services at the service reservoir, which provides the main storage facility for the central Fife distribution system. Work took place during the COVID-19 lockdown, with staff adhering to strict guidance set out by the Scottish government.

Work was delayed by two weeks to allow Oyster Catcher chicks to hatch, after it was discovered a nest had been built at the reservoir during the initial phase of lockdown when there were no works taking place at all.

Eric Ross, Scottish Water Networks team leader for the east area, explained: “A number of practical measures were taken to ensure construction works at the site were carried out safely and with minimum disruption.

“Customers in the Fife area should be pleased to hear their water is being supplied in a way which has a lower impact on the environment than ever before and using technology which will help drive down operating costs too.”

Scottish Water announced in 2015 that it was to spend £9 million on solar projects, which has helped fund projects such as its 1.2MWp solar River Spey site.

A number of utilities are looking to onsite solar to help drive down their emissions, for example HBS announced it was to install 11.6MWp of solar for Anglian Water in March 2020, Yorkshire Water opened a tender for solar at 150 sites in June 2020, and HBS landed a deal to install solar across 21 Welsh Water sites.