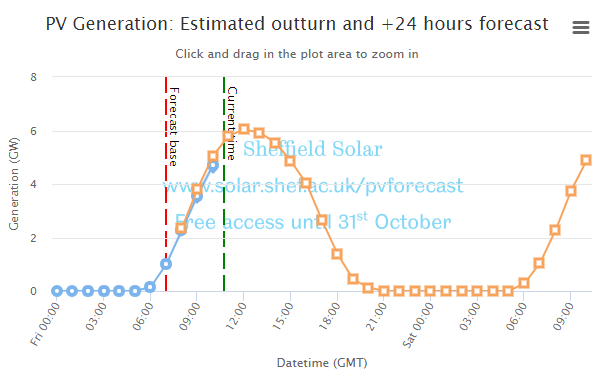 The Sheffield Solar research group has launched a new tool capable of forecasting output from PV systems up to 72 hours in advance.

It is currently being trialled online and Sheffield Solar said it had plans to further develop it beyond the half-hourly forecasts current accessible. Regional forecasts are to follow, with national forecasts being made available for individual systems up and down the country.

It is hoped that grid operators like National Grid will be able to use the tool to better plan ahead, particularly during times of excessive generation like those seen earlier this year, and draw up contingency plans for other generators.

Sheffield Solar is based out of the University of Sheffield’s physics department and has for the last two years been working closely with National Grid on the tools development.

Previous iterations of the tool, specifically the ‘PV_Live’ product Sheffield Solar uses to monitor live PV generation in the UK, have been published online, however the group said the new service “takes thing a step further”.

The need to more accurately predict solar generation has risen in prominence over the last 18 months as total solar capacity has soared, culminating in a series of records earlier this year.

Most prominently among those records are the 8.91GW of output witnessed between 1pm and 1:30pm on Friday 26 May – the most solar ever witnessed on the UK grid – and the afternoon in late-March which saw afternoon demand on the grid dip below the previous night’s demand for the first time in history.