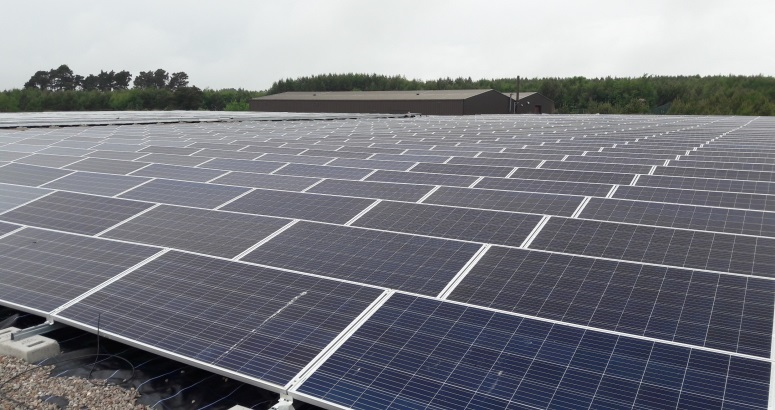 Solar PV such as this ground-mount array at Scottish Water's Inverness site is still being deployed, although Scotland contributes just 2.5% of the UK's solar energy. Image: Scottish Water.

Solar Energy Scotland's calls for the Scottish Parliament to make key policy changes to support solar have been backed by a new motion put forward by Fergus Erwing MSP, highlighting the need to scale-up solar deployment.

This motion - which was put forward yesterday (9 December) - suggests the Scottish government should welcome Solar Energy Scotland's policy agenda, Scotland’s fair share: Solar’s role in achieving net zero in Scotland, which sets out the potential for solar energy to play a much greater role in Scotland’s low-carbon energy mix. This agenda includes three key policy changes, the first being that Scottish domestic building regulations should include an affordability target for new homes and recognise the role of exported solar energy.

Additionally, Scottish agriculture, infrastructure and land use policy should incorporate a presumption in favour of solar deployment.

"Scotland’s solar energy can, and should, play a key role in providing electricity. Now is the time to make practical progress to that aim. I hope to bring this matter forward to the Scottish Parliament for debate soon," Erwing said.

Indeed, Solar Energy Scotland added that with solar now being the cheapest form of electricity, with the ability to be deployed at all scales, the technology has a central role in supporting an affordable energy mix and a just transition.

“For too long, the potential of solar in Scotland has been overlooked. We hope this motion will help the technology receive the recognition it deserves in parliament and shine a light on the policy changes that the sector needs to accelerate solar deployment in Scotland so that we catch up with the rest of Europe," Thomas McMillan, chair of Solar Energy Scotland , said.

The motion also references the calls from Solar Energy Scotland to the Scottish government to set a minimum target of 4GW of installed solar capacity by 2030, although up to 6GW of solar would be possible, according to the trade body.

Earlier this year, it called on political parties to up their solar ambitions ahead of Scotland's election, with Scotland contributing just 2.5% of the UK’s solar energy. As such, Solar Energy Scotland said that political manifestos should contain plans to increase energy efficiency standards for existing housing stock and expand finance support for homeowners, local authorities and housing associations to retrofit solar onto residential properties.