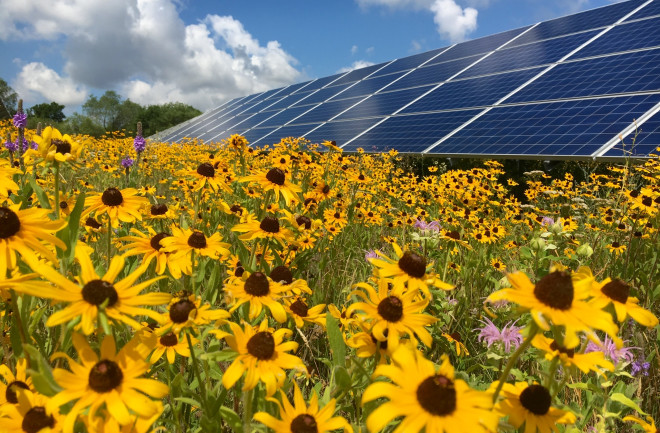 Solar Energy UK has developed a standardised methodology for monitoring biodiversity on solar farms, to help provide a better assessment of changes and aid ecological management.

Following the new guidance from the trade association – which was in developed in collaboration with Clarkson & Woods Ecological Consultants, Wychwood Biodiversity and Lancaster University –  will help maximise the positive impacts of solar plants on biodiversity, while reducing negative ones, it said.

The guidance has been split in two parts; key components, which need to be measured on each site, and additional components, which are more dependent on planning and budget requirements from the site owner as well as the site specificities.

Key components include the recording of current and past management techniques, such as seed sowing and planting activities, site information – panels size, location, and height of panels amongst others elements – and its management (yearly grazed or not).

A standard botanical quadrat which will help record the presence of different species could be helpful on giving a potential nectar production on the site, the guidance adds. Additional components to monitor include breeding and wintering bird survey, detailed soil analysis or biodiversity net gain.

How frequently each aspect should be monitored will vary, with key components usually being measured every visit, while certain components will only be measured when it is the most optimal time of the year to gather the information.

The data collected by site owners will be anonymised and published in an annual Solar Energy UK report to help provide a better understanding of ecological trends on solar farms across the country.

“In recent years the industry has also seen evidence of nature recovery on its sites, for wildflowers, pollinators and other species. Solar Energy UK’s annual biodiversity survey will help us demonstrate how solar farms are improving prospects for local wildlife at scale.”

Earlier this year, Solar Energy UK in collaboration with other organisations released a best practice guidance for solar PV biodiversity.

As more and more utility-scale projects are built across the country, assessing the impacts of solar on biodiversity is getting more important for developers. Solar Power Portal’s sister site PV Tech Power recently spoke to Wychwood Biodiversity's founder and co-director Guy Parker as part of a wide-ranging feature on boosting the biodiversity and wildlife habitats of solar farms.