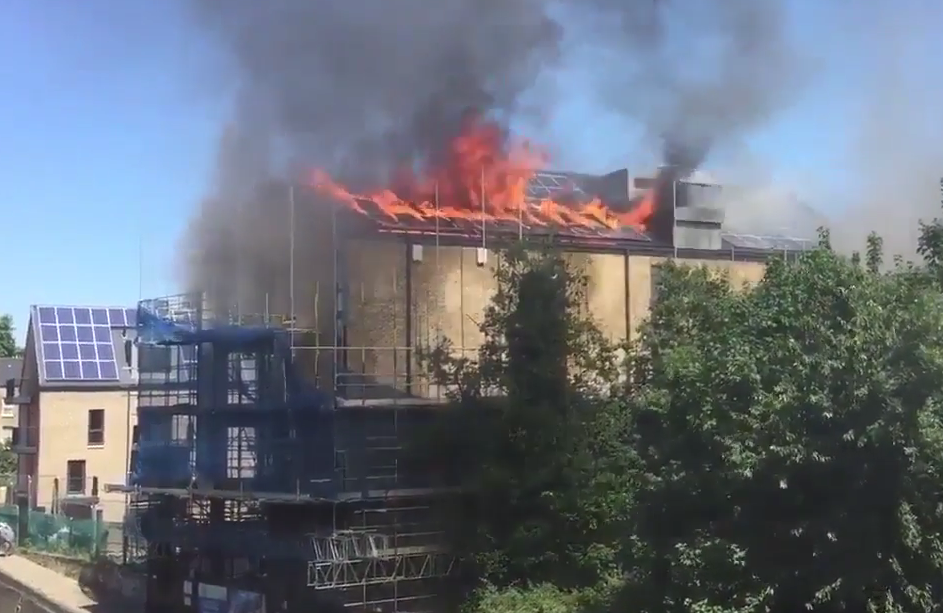 A recent fire in Bow Wharf was largely blamed on faulty solar panels, despite London Fire Brigade stating an investigation was still to be carried out. Image: Twitter/Andrew Bannister.

Fires involving solar panels are most commonly caused by errors in the installation process rather than any particular technological faults, a new report by both the Building Research Establishment (BRE) and the government has concluded.

And the UK solar industry has leapt to solar’s defence, arguing that it has an “exceptional” safety record compared to other, far more mainstream consumer electronics.

This morning the Department for Business, Energy and Industrial Strategy (BEIS) published a series of reports it commissioned to the BRE on fire safety in solar panels. While fire safety in buildings has come to prominence following last month’s Grenfell tower fire and later brought into a solar PV context by a much-publicised fire in Bow Wharf – the cause of which has still not been confirmed – the report has been years in the planning.

The BRE analysed more than 50 incidents of fires where solar PV installations were included in the report. Of those, 17 were considered to be serious, a further 25 described as localised fire incidents and 10 where the PV system was not deemed to be the cause of the fire.

The majority of these were involving rooftop installations. A total of five incidents were recorded at ground-mounted solar arrays, however BRE said that it “strongly suspected” fires in this field have been underreported.

More pertinently BRE said that several “themes” had emerged where PV systems had been the cause of fires. It described how many incidents boiled down to installation problems or component failure – particularly DC isolators – however even in the latter’s case, some of this was again attributable to installer errors.

But installer errors have proven to be a recurring theme of BRE’s research. More than a third (36%) of fires were attributed directly to problematic installations, with just 12% down to faulty products and 5% down to system design. The remaining 47% could not be attributable to any one root cause.

But another common theme within BRE’s research was electrical arcing in PV installations, a phenomenon capable of causing materials to combust in less than a second. Arcing, it said, commonly occurred when electrically conducting parts become physically separated by mechanical movement or mis-alignment, which again could be the result of poorly completed installations.

The report warns that as solar PV has taken off in the UK – more than 800,000 accredited installations have been completed to date – the instance of fire incidents involving solar panels is only likely to rise further in tandem with installations.

To combat this threat, BRE has issued a series of recommendations, particularly in the fields of system design and installer training that it is passing down to the Microgeneration Certification Scheme (MCS) to disseminate.

It is principally looking to ensure the MCS Guide to solar installation is amended and updated to include additional guidance on array layout, DC isolator involvement, on-site quality control processes and the use of fire retardant materials in inverter mounts.

These figures, the STA argue, show solar PV systems are safer than washing machines in terms of fire risk.

“While the specific guidance for solar PV developed by MCS for the industry, and further enhanced by the recent IET Code of Practice, has delivered an excellent fire safety record to date, electrical safety is paramount.  Every opportunity to make an extremely safe technology even safer should be taken. The STA therefore backs all of the BRE’s recommendations to further improve the maintenance and design of PV systems and to further improve installer training, particularly on DC capabilities,” the STA said in a statement.