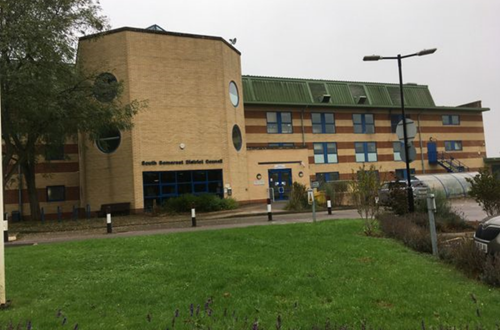 SSDC is set to install rooftop solar at nine sites including its offices on Brymton Way. Image: SSDC.

South Somerset District Council (SSDC) is to install over 700kW of solar panels on nine council buildings as part of a push to cut carbon emissions.

It recently submitted notifications of prior approval for the installation of the solar photovoltaic systems for the sites, all of which will be rooftop installations.

Speaking to Solar Power Portal, a spokesperson for SSDC said it had been successful in the Public Sector Decarbonisation Fund allowing it to target the solar developments to “help decarbonise the public buildings by increasing the buildings' energy efficiency and installing renewable energy generating technologies to remove the use of carbon emitting fossil fuels.

“Total PV generation to be installed across the nine buildings is 734.76kWp, predicted annual savings of around 598,000 kWhrs of energy each year, saving around £100,000 on energy bills with an annual carbon reduction of 47.21 tons.”

The council expects the fund to have to be spent, and all the solar systems to be installed by end of September 2021.

SSDC is working to make the local authority carbon neutral by 2030. As well as the solar developments, it has also developed the UK's largest council-owned battery storage site.

The 30MW Fideoak Mill BESS site in Taunton was developed by the council alongside Opium Power, Kiwi Power and a number of other partners in 2020. Following the success of the project, SSDC has announced it is to develop a 40MW facility near Fareham in Hampshire.