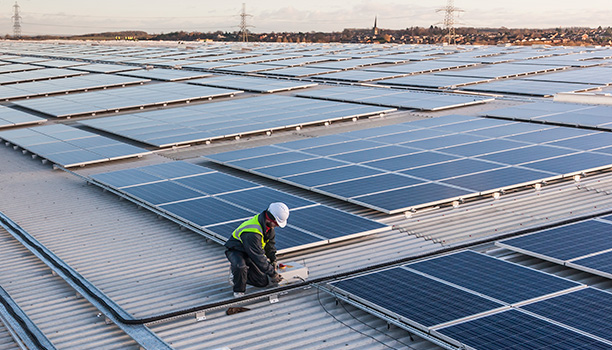 The Solar Trade Association (STA) has issued a call to arms for the UK solar industry to challenge a proposed increase in business rates which could dramatically impact on commercial rooftop PV.

Last month the STA revealed that, having discussed the matter with the Valuation Office Agency (VOA), it had become apparent that rateable values attached to solar PV installations could rise to as much as £55 per kW for a 4-150kW system, roughly eight times the current rate of £8/kW.

Such an increase would stand to have a significant impact on the economics of commercial rooftop installations and, as a result, the STA has called for action.

But having exhausted discussions with the VOA, the STA is now calling on members of the industry to lobby local MPs and other politicians in an attempt to have the increase stopped through a statutory instrument, which could be laid in parliament to prevent such an increase.

Leonie Greene, head of external affairs at the STA, said there was no need for the industry to panic, but it needed to act quickly.

“We are pretty confident that ministers will be keen to scotch the proposed shock business rate rise when the problem is appreciated. The extra challenge at the moment is communicating with a government and an energy department in a state of transition but we are already talking to officials and advisers across lots of departments.

“However, seeing this threat off quickly depends on swift action by the industry. We strongly urge every solar company to contact their MP as soon as possible. Companies should ask their MP to contact the BEIS secretary of state Greg Clark setting out how serious a threat the proposals present to the non-domestic solar industry.

“Rather than tax bombshells, it is clear that the industry needs and wants to see a positive tax regime to reward responsible companies. We very much hope that the new integrated department will tune a fresh ear to the unparalleled growth, jobs and innovation potential solar offers,” she said.

The STA has released a policy briefing document – downloadable here – to inform members of the industry of the proposed changes and how they can contact their local MP. People are also being asked to request that their MPs notify Clark, financial secretary Jane Ellison and local government minister Marcus Jones of the issue.

There is however some urgency concerning the matter, with business rate notices due to be sent at the end of September.

The revaluation comes at a time when the commercial rooftop market has emerged as a market of significant importance for the domestic solar industry given the severely reduced run rate seen within the residential market.

But while the change is seen as potentially damaging and other technologies such as CHP are exempt from business rates, it has not been regarded within the industry as a purposeful policy attack, as other adjustments have been.

When contacted by SPP for comment on the industry's concerns, a spokesperson for the VOA, said: "We are in continual discussions with industry bodies on how we assess different types of non-domestic property. We will be publishing draft rateable values on 30 September 2016."