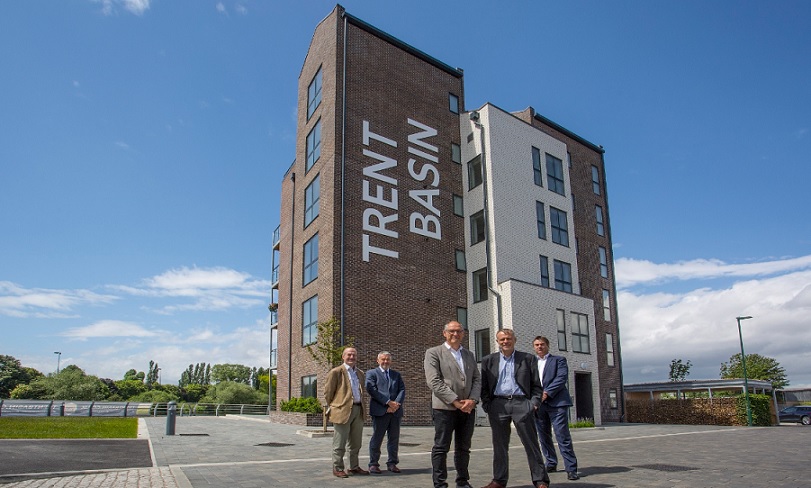 Representatives of the energy consortium behind Trent Basin gather to mark the launch of the pilot scheme. Image: Blueprint

What is expected to be Europe’s largest community battery is set to be installed at an innovative regeneration scheme in Nottingham, with a 2MWh Tesla battery to be deployed in September as part of a housing scheme alongside community solar.

The £100 million Trent Basin project is a new housing development built at the site of an inland dock previously derelict for around two decades. It is expected to deliver 500 homes over five phases with 375kW of rooftop and ground mounted solar and the Tesla battery to be installed by EvoEnergy.

In an innovative use of the solar farm, planning permission has been granted on the basis that the site shall be cleared by 28 February 2020. By this time, the panels from the ground mounted installation will be removed and installed on new homes built as part of the development.

With the addition of the battery storage facility and ground source heat pumps which will also be used on site, Trent Basin is intended to provide a new way to use renewable energy sources by generating, storing and distributing all at a neighbourhood level. A local energy company, Trent Basin ESCO, has already been set up to facilitate the local energy services.

According to project lead Blueprint, the battery will store energy from the local renewable generation to be used on site while also performing grid arbitrage and smoothing out the peaks and troughs of supply and demand.

“The way we generate and distribute energy in the UK is inefficient and carbon intensive. It doesn’t have to be like this. With new technologies, especially in renewable energy and storage it is possible to do better,” commented Blueprint’s chief executive Nick Ebbs.

The pilot is intended to demonstrate how to lower cost and reduce carbon whilst allowing residents to better engage with the energy they consume. Residents that opt into the scheme will have photovoltaic panels installed on their roofs, and be provided with smart meters and voice controlled speakers for access to live data on energy created, stored and consumed.

It is expected to provide energy savings of around 30% compared to conventional house developments and has already attracted several homeowners who have either bought or reserved properties.

Councillor Alan Clark, portfolio holder for energy and sustainability at Nottingham City Council, said: “I am delighted that Nottingham has been chosen to pilot this innovative scheme. This highlights that the city is at the cutting edge of energy innovation, having the right people and infrastructure to get these types of projects off the ground. This growth in community renewable energy will help to sustain our status as the most energy self-sufficient city in the UK.”

Trent Basin is being supported by £6 million of grant funding from two energy programmes run by Innovate UK, while a consortium has come together to deliver the scheme, including  business, government and academia and led by public private partnership Blueprint.

Ebbs added: “Technologies now exist that mean we can deliver community energy in a way that can bring real benefits to consumers and significantly reduce carbon. The barrier to adoption has been the complexity of putting consumers, new technologies and business models together in a way that makes it all work. That is why Innovate UK is supporting this pilot. We feel privileged to be involved in such a ground-breaking initiative.”