Today, we continue our coverage of the Top-20 EPCs to the UK market, with companies filling the positions 7 to 11. Companies occupying numbers 12 to 20 have been featured here and here.

Similar to the blogs this week, we provide a brief summary of the company’s activities in the UK solar market, and specifically large-scale ground-mount solar, while also highlighting some of the more interesting issues that emerge from the strategies at play.

Our third grouping covers companies in positions 7 to 11, shown below. 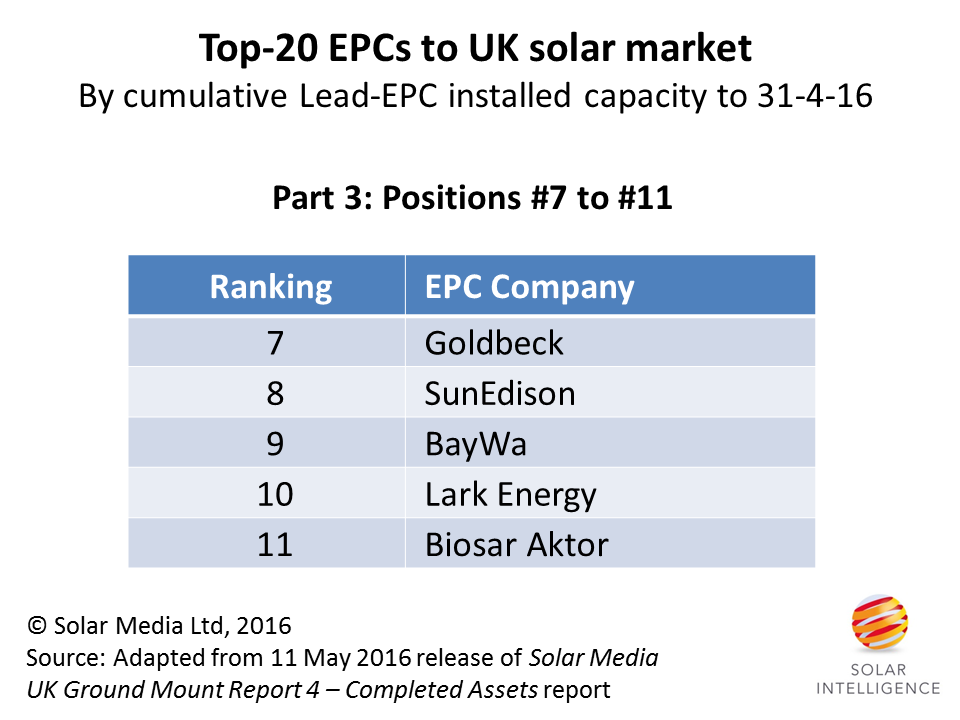 The group of EPCs covering positions 7 to 11 is dominated by companies where UK EPC operations are run out of mainland European headquarters, including Goldbeck, SunEdison, BayWa and Biosar, with Lark Energy being the only UK based EPC here.

As we move well into the big hitters, in terms of megawatts of solar farms installed in the past five years, each of the companies is very much a household name within the industry in the UK. But similar to the blogs in the past couple of days, once again the strategies under which UK solar farms operations have been conducted reveal a wide range of options. These are discussed below now for each of the companies.

Since its entry to the UK solar market at the start of 2014, Biosar (part of Greek based construction firm Aktor) has been one of the most prolific EPCs, with more than 20 solar farms done alone in the past 12 months. The company owes almost all its success to be somewhat the unofficial in-house EPC contract resource for a couple of UK based developers.

With no play at the development stage, and no participation in SPV transfer activity, Biosar is as close as we get in our listing to a pure-play sub-contracted EPC service and the company’s success in the UK is as such almost entirely reactive. This has made Biosar’s totals less a feature of the company’s market presence in the UK sector, but more a knock-on effect of being aligned with the correct couple of developers at the right time.

Biosar will likely remain one of the leading EPCs over the next six to nine months, but ultimately the company would need to be proactive in attracting more customers if it is to repeat the success it had until now.

As we move into the Top 10, we start with a company that could not be more different to Biosar. Lark Energy has been one of the companies that was effectively in a group that kick-started solar farm development in the UK from the start.

Part of the established UK-based construction firm Lark Group, Lark Energy has been highly engaged with the solar sector in the UK, the trade organisations and through lobbying (and often legally challenging) the government and the Department of Energy and Climate Change.

While the group’s solar activities cover both commercial rooftop and utility ground-mount, the bulk of the company’s solar success has come from its play in solar farms over the past five years.

The strategy for ground-mount has combined site development and stand-alone EPC work, but in recent years, it has been dominated by owning the whole process from site selection through to asset sale. With strong financial backing from both parent group and external investment, Lark Energy shot to fame when it developed the Wymeswold site in 2013, then the largest in the UK, and in many ways, this represented the birth of the mega solar farms that continued to the end of March 2016.

Similar to Biosar, Lark Energy has also been very strong in the past 12 months, with a similar number of sites built in this time period. The company retains a healthy pipeline of sub-5MW sites, a consequence of its extensive site selection and planning activity leading up to the July 2015 policy changes by DECC.

As one of the few public-listed companies to feature in our Top 20 EPC listing, German-based BayWa has been active in building solar farms in the UK since the end of 2013.

Benefiting from strong corporate backing (group revenues in 2015 exceeding €15 billion), and a renewables division with extensive experience in the wind sector also, BayWa’s UK-specific strategy for the ground-mount sector has followed a well-rehearsed and somewhat prescriptive path.

In almost all cases, the strategy has been to purchase shovel-ready sites (often greater than 10MW in size), build-out through in-house lead EPC capability, hold the sites for a period of time following accreditation, and then sell them off, either individually or as bundled packages, to German-based portfolio holdings.

With minimal appetite to participate in getting involved in smaller sites below 5MW, it is perhaps to be expected that BayWa will have limited involvement in the remaining 1.2 ROC months, but could easily return to the market in a few years if there is a financial case to be made.

In arriving at the number 8 ranked lead EPC, one could certainly reel off pages of text about what has been happening at SunEdison in the past few years, and in particular since the start of 2016.

When looking specifically at the UK, there is also ample scope for extended coverage on SunEdison’s overall solar strategy that at one point had rather lofty ambitions and extended to undertaking acquisitions and setting up working arrangements to access the rooftop market (at a time when the writing was somewhat already on the wall for the beleaguered FiT scheme).

However, the discussion here will adhere strictly to the topic in question: lead EPC performance of large-scale solar farms.

While legally a public-listed US-based entity, SunEdison’s UK solar activities should be categorized clearly as Spanish operations. While the company maintained UK staffing, it was somewhat a satellite of the Madrid operations that very much defined its play in UK solar farms.

Having seen the UK solar market blossom in 2012 and 2013, as the industry was able to take advantage of the 2 ROC banding level, the company burst on the scene at the start of 2014, due in a large part to the acquisition of a substantial shovel-ready package of solar farms. At this point, SunEdison’s strategy was to buy/build/flip, and then retain O&M responsibility to the UK-based asset holder.

What then followed was a frenetic spending spree of buying as much as possible, building out in super-quick time, and then shifting the sites based on pre-determined buying options held by TerraForm. During this time, the company was far more heavily involved in the initial site development, forming working arrangements with various pure-play developers in the UK.

However, as the relationship between SunEdison and TerraForm moved into a somewhat fractious state, and the financial standing of SunEdison became a topic of concern to its previously supportive investment community, SunEdison’s remaining solar commitments leading up to the expiry of 1.3 ROCs at the end of March 2016 saw a return to the build/flip model that had characterised its entry in 2013.

As the dust settles on the company’s ongoing restructuring, there can be no question that SunEdison’s involvement in adding to the country’s solar farm capacity levels was nothing else but spectacular. And this very much contributes to the high ranking in the market, having been active for a relatively short time, compared to some of the other EPCs featuring in the league table.

Having relied entirely on sub-contractors (mostly from Spain) for building the sites, and using the Spanish base also for O&M activities, it will ultimately be solar industry employees in Spain, and not the UK, that suffer most from SunEdison no longer being the force going forward, in terms of being potentially one of the most influential overseas companies to move into the UK with a well-defined strategy to build out large-scale solar farms.

Coming in at number 7, German-based Goldbeck has been strongly engaged with the UK ground-mount segment right from the start, and continues to one of the key EPCs to the domestic market.

The family-owned company, almost 50 years old, was historically into steel construction before shifting into construction activities, out of which the solar EPC business unit evolved. Recognised early in the UK’s solar farm growth as a reliable and efficient partner, Goldbeck was repeatedly called upon to be the EPC-of-choice for sites that were predestined for institutional investors.

Goldbeck has performed lead EPC work on well over 30 large-scale solar farms in the UK since 2011, with the largest as high as 50MW. It is likely that the company will continue to see business in the UK, and Ireland, having become an integral part of the local market and highly regarded by a growing number of investment funds.

The Top 20 EPC list continues tomorrow, with companies holding the ranking positions from 2 to 6 revealed and discussed.

All data used in the Top-20 EPC methodology is contained within our Solar Media UK Ground-Mount Report 4 – Completed Assets report that includes a full audit trail of completed solar farms in the UK, with updated releases delivered to subscribers each month.