Today, we continue our coverage of the Top-20 EPCs to the UK market, with companies filling the positions 2 to 6. Companies occupying numbers 7 to 20 have been featured in blogs on Solar Power Portal in the past three days.

Our fourth grouping, before we reveal the number 1, covers companies in positions 2 to 6, shown below. 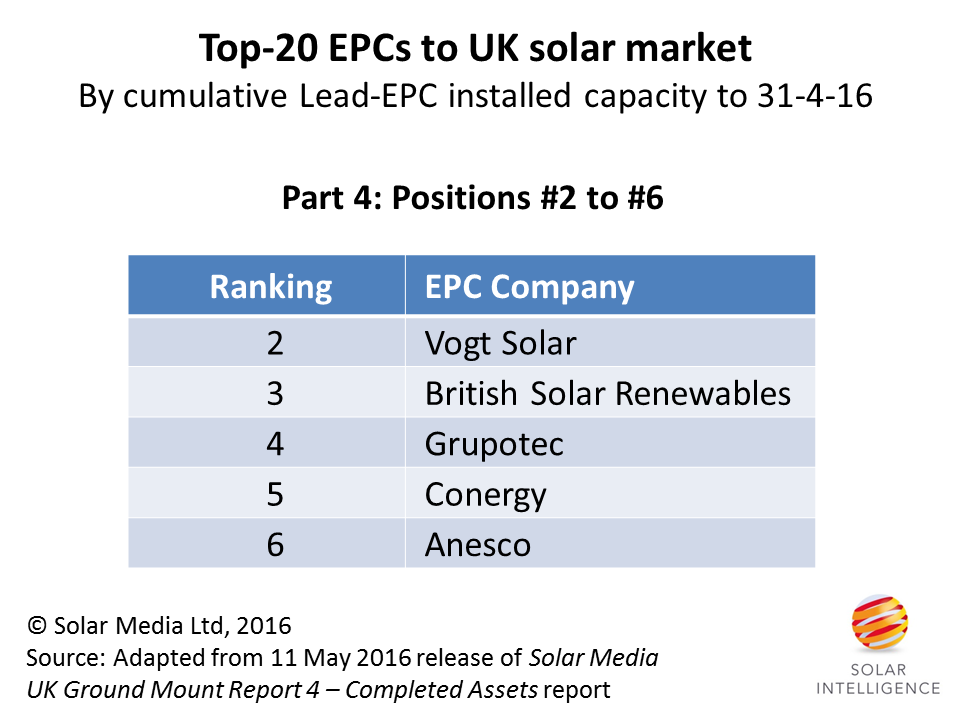 Having installed cumulatively well over 2GW of large-scale solar farms in the UK, EPCs ranked in positions 2 to 6 are among the most active within the UK solar market. Similar to the themes over the past few days coverage on Solar Power Portal, the approach of each company to the UK market can be seen to be different.


The group of companies from positions 2 to 6 have been active in the UK solar market right from the early days of FiTs in 2011, and each continues to prioritise the UK market as a key opportunity, well beyond the expiry of ROCs in 2017.

While each company has been lead-EPC on well over 400MW, the strategies of each company vary drastically, discussed now in more detail.

To most international readers of Solar Power Portal, the name Anesco is likely to mean very little. Indeed, as perhaps the most secretive company operating in the UK solar sector today, very few – if any – outside the company within the UK have actually woken up to the scale of Anesco’s achievements in the UK solar industry in the past few years.

What Anesco has done within the UK solar market can only be described as incredible, and its success has been achieved at blistering pace, as the one company that has truly been able to shift gears to its advantage every time the government has changed the goalposts.

A large part of its success between 2012 and 2016 can be traced directly to its senior management team that managed to navigate the company to consistently excel within the policy environment at the time. Anesco’s ability to do this, while being largely invisible to the local trade bodies, competitors’ lobbying efforts, or even participating at any of the UK solar conferences and exhibitions over the years, is all the more impressive.

We will touch upon more of Anesco’s achievements next month on Solar Power Portal, but for now, let’s have a quick look at how the company became one of the leading EPCs within a 10GW market, without having had any previous experience in solar farm building prior to 2011.

In US-jargon, Anesco’s build profile of solar farms is probably best described as cookie-cutting, with more than 80 individual solar farms where it has been the lead-EPC, making Anesco the leading EPC in the UK by site count.

But unlike some of the other (mainly European EPCs) companies in the Top 20 table, Anesco is way more than just an EPC; something that has been a key factor in making sure that the company was driving the frequency and profile of the sites that it would ultimately undertake lead EPC activities on.

Anesco would appear to have been incredibly successful during the whole period from 2011 until now, in accessing the necessary funds to do both greenfield development and perform regular shovel-ready site acquisitions (and some far from shovel-ready) from a broad range of project developers in the UK. And in the past 12 months, the ability to get the upstream financing correct has been mirrored in the way that Anesco has exploited downstream post-build options, most clearly shown through shared grid-connections with community-based schemes under FiTs.

What Anesco does next, post-2017, will likely be every bit as interesting to monitor, but if things go along the same lines as before, don’t expect any bunting to be put up nor any glossy press releases to be issued, informing the outside world (or more importantly its competitors) just how and what the company intends to do post-FiT and post-ROC.

While Anesco has been the epitome of creative drive, German-based Conergy has been a shining example of methodical efficiency when it comes to building solar farms in the UK.

Looking somewhat different to its original entry into the solar arena, when ambitions were then centred at having a European-based upstream panel manufacturing business, the new Conergy that emerged post restructuring is the one most well known in UK solar.

Benefiting from strong financial backing, strategic alignment both upstream and downstream to core EPC activities, Conergy has been a leading EPC since the first days of solar farms in the UK back in 2011, with a number of sites above 20MW in size.

Initially operating mainly as a third-party EPC contractor, the shift upstream to self-developed and co-developed sites was matched by having the ability to pick up sites from other developers unable to take approved sites through to completion.

Conergy remains committed to the UK solar market during 2016, with a healthy EPC pipeline in place, and it another company that will play a key part in UK solar in 2017 and beyond.

Another Spanish based contractor, Grupotec was previously the leading EPC of solar farms in the UK, but has seen its market-share slip in recent times.

Active in the UK market since 2011, Grupotec was for many years the preferred EPC contractor of choice by one of the leading developers and asset holder in the UK, but has been forced to share the spoils in recent years with a greater number of competing EPCs from Southern Europe.

At number 3, we have another all-UK operation in British Solar Renewables, or BSR. As one of the original pioneers in the ground-mounted UK market, it is hard to imagine a UK solar farm landscape today without BSR’s contributions dating back to 2010.

Right from the start of UK ground-mount growth, more often than not it was BSR that made the headlines, set the standards, and illustrated the potential for a new UK entity to thrive within the confines of government set policies and incentive rates.

From the word go, BSR set up an operations that retained strong in-house ownership through the entire solar farm process, from site-selection to planning applications to asset retention or divesting, and not to mention performing lead EPC duties that accounts for the company’s top tier ranking here.

With a highly concentrated geographic focus, in and around the company’s home county of Somerset, BSR has mainly performed lead EPC work on its in-house developed projects, being selective on the sites that it has acquired in order to build out and typically own thereafter.

Indeed, for some time, it appeared that BSR was scaling up to be the only truly vertically-integrated solar company in the UK, with certified ICP capability and being an early mover to create a vehicle for asset ownership combined with O&M responsibilities.

Currently, BSR is understood to still hold a great many of its sites on its books, from this strategy. Whether this will remain the case a few months from now remains to be seen, with the competing demands from a cash-flow perspective to potentially bundle a number of these sites and sell off to one of the many institutional investors active in the UK.

With experience at having brought in the finance to build some of the largest solar PV sites in the UK until now, the company remains one to watch in the coming years, both in terms of new build activity or what it intends to do with all the sites completed during the past five years.

Our number 2 entry is Vogt Solar (ib vogt), the highest ranked German company in our Top 20 EPC league table. And of all the German EPCs occupying ranking positions, none has matched the level of engagement, efficiency and success of Vogt Solar within the UK.

Assessing very early the opportunity that emerged in the UK during 2010, under the FiT subsidy regime, Vogt Solar established a strategy right away that was extended back to site selection, project development and subsequent EPC activities.

Also, in a trend that continues to this day, Vogt Solar balanced site ownership and EPC work through a combination of in-house and third-party developed projects, working very closely with other German developers active in the UK. Indeed, in-house projects also benefited from effectively having the dedicated resource of Parker Dann, as opposed to other developers that would often be using shared resources from one of the larger planners serving the solar, or renewables sector in the UK.

The strategy of building out, bundling and selling to key portfolio holders was equally successful under ROCs also.

Over the past 18 months, Vogt Solar has become more diversified in its UK solar efforts, with the flexibility extending to doing pure third-party contracted lead EPC work, and buying sites from a wider range of project developers, some of whom had struggled to move approved sites forward to shovel-ready or pre-build status.

Another unique feature of Vogt Solar has been its selection of components used in the build process, in contrast to some other developers and EPCs in the UK that have often shopped around at the eleventh hour for low-cost panels, just to cite one example here. Much of this can surely be traced back to ib vogt’s heritage in the solar industry, prior to the UK boom, and indeed, the technical and industry knowledge of its senior management team.

As an example of a company that entered the UK to exploit the prevailing market opportunity for solar farm investments, and subsequently put in place an incredibly professional and technically competent strategy to build high-quality solar PV farms, few companies have come close to Vogt Solar in the past 5 years.

However, with competing global markets within the solar industry today, and the company’s ability to shift with relative ease anywhere in the world, we may well see a retreat from the UK market after 2017 projects are done, but if anyone is looking for a guide to when solar farms become viable again in the UK, you could do a lot worse than watch out for Vogt Solar’s timing on its return to the UK thereafter.

The Top 20 EPC list continues tomorrow, as we discuss the company that is the clear market leader in the UK, with an installed solar farm capacity well above any other company featuring in full Top 20 league table.

All data used in the Top-20 EPC methodology is contained within our Solar Media UK Ground-Mount Report 4 – Completed Assets report that includes a full audit trail of completed solar farms in the UK, with updated releases delivered to subscribers each month.