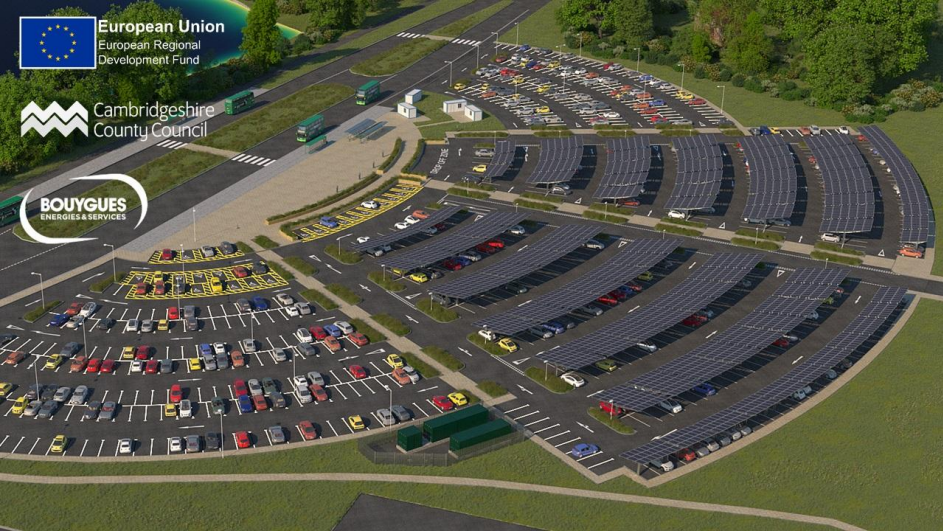 Cambridgeshire County Council has received planning permission for what it claims will be the UK’s largest solar carport.

The installation, which will be developed at the site of St Ives’ Park & Ride, is anticipated to be 948kW in size and combined with a battery storage system as part of a wider demonstrator project with collaboration from distribution network operator UK Power Networks (UKPN).

Planning documents associated with the proposals do not include any prospective size of the storage unit.

The council is combining with central government, St Ives town council, UKPN and local businesses in a bid to turn the scheme into a replicable model for future smart grid deployment. Should it prove successful, it is hoped that further systems of similar size and scope could be deployed elsewhere.

The £3 million cost of the project is to be supported by European Regional Development funds, which will provide half, while the council will invest the remaining funds.

The car park will be covered by three main canopies fitted with solar modules. Generated electricity will be used first and foremost to power LED lighting and adjacent electric vehicle charging points.

Any surplus will be stored using the battery system and sold to local customers, helping to finance the project’s development.

Cambridgeshire County Council has turned to its frequent development partner Bouygues Energies and Services to design and construct the system. The duo also combined for the 10MW Triangle Solar Farm late last year, which became the second solar project supported by a Contracts for Difference award to connect to the grid in January.

“The project demonstrates how smart micro-grid solutions can be used to help address current and future energy challenges. Renewable energy will charge electric vehicles and serve local energy consumers. We are delighted to have this opportunity to work with Cambridgeshire County Council on this exciting scheme,” he said.

Councillor Josh Schumann, who also serves as chair of the council’s commercial and investment committee, said the planning permission was a “significant milestone”.

“St Ives Park & Ride is a great asset next to the guided bus and the town centre to pilot a smart energy grid, the first of this scale in the country. This innovative type of technology is part of many projects the council is looking at to develop its assets to reduce costs and generate income to support our services,” Schumann added.

Although billed as a potentially significant boon for the UK’s solar industry, carports have arguably yet to take off, with few installations of scale having been completed. Nottingham City Council installed a 76kW system at Harvey Hadden Leisure Centre in 2015, while SunGift claimed a UK first when it installed solar on a multi-story carport in Exeter the same month.

The St Ives project may not be the UK’s largest for long, however, with Bentley Motors having last year won planning permission for a 3MW solar carport at its manufacturing facility in Cheshire.