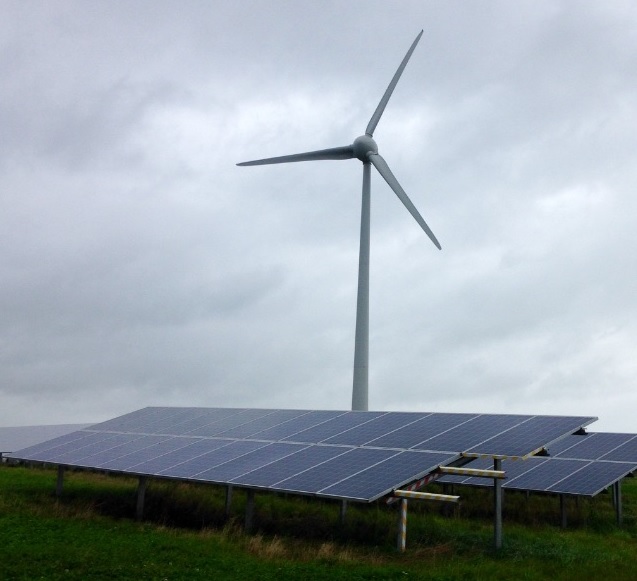 Parc Cynog has been generating solar alongside wind output for over 18 months.

Vattenfall has heralded the success of its first co-located solar and wind energy park around 18 months after the 4.99MW solar farm in south Wales was commissioned.

The Parc Cynog solar farm was built in March 2016 to gain 1.3 ROC subsidy and shares a grid connection with the 8.4MW wind farm on the same site. The pilot project was designed to test how the generation profiles of the two technologies complement each other and according to the site's operations manager: “Performance has been very good…particularly with it being a hybrid.”

Speaking to Solar Power Portal recently, Vattenfall’s senior vice president for the wind business division Gunnar Groebler added: “The good thing is that from an in-feed pattern it matches very well because usually when you have a sunny day you have less wind and vice versa.

“From a grid perspective it’s also a good thing to do because it helps to integrate the renewables into the grid."

Vattenfall had intended to build the ‘hybrid’ project at its onshore wind farm in Swinford, Leicestershire however owing to grid constraints in the region, a secondary site had to be found.

While Parc Cynog was deemed suitable, Wales’ weak grid infrastructure meant that Vattenfall had to accept an element of curtailment on the solar side of the development. Through close working with Western Power Distribution, a power plant controller (PPC) was installed on site but operated by Vattenfall rather than the DNO.

When combined output from the wind and solar reaches 4.1MW, the PPC kicks in to curtail the solar farm, as this is technically easier than limiting wind output and also suited the landowner, who is compensated with a production royalty for the wind instead of a basic fixed rental per acre for the solar.

“To enable us to use that grid connection, we had to accept that curtailment would be necessary,” explained senior project manager Stephen Holroyd during a recent site visit. However, he added: “For the vast majority of the time, the grid connection is not maxed out.”

While not feasible for all of its wind farms, Vattenfall is now “looking at all aspects” following the closure of the Renewables Obligation for new onshore wind to “maximise its assets” through co-location and is currently identifying further opportunities to add solar and battery storage.