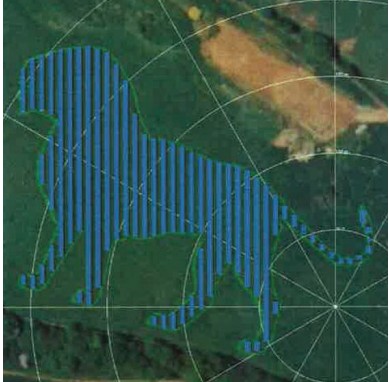 The solar farm is being designed in the shape of a lion, to mirror the chalk lion that sits on the other side of the zoo. Image: ZSL Whipsnade.

ZSL Whipsnade has unveiled plans for a lion shaped solar farm, in an effort to reduce the UK’s largest zoo’s carbon footprint.

The solar PV array would cover two acres of its 600-acre site, and produce 1MW of energy – around a third of the electricity currently required to power the zoo.

It is being designed in the shape of the famous Whipsnade chalk lion, which sits on the other side of the zoo. This lion has sat overlooking the Dunstable Downs in Bedfordshire since 1933, and was restored in 2018 having been covered over during the Second World War to avoid it being used by enemy aircrafts as a navigation point.

The new solar lion forms part of ZSL Whipsnade’s goal to become net zero carbon by 2035, along with plans to reduce emissions from electricity and fossil fuel use for heating by 50% by 2030.

Owen Craft, ZSL Whipsnade Zoo’s chief operating officer said they were excited for the solar lion to join the Whipsnade White Lion “and even more excited about the difference she could make to the planet.

“As we approach the United Nations climate change conference COP26 in Glasgow, we’re calling on world leaders to put nature at the heart of global decision making, and we’re committed to that ourselves.

“I hope that our Whipsnade Solar Lion, when she is in place, will be a beacon of light reminding people that change is not only necessary, but possible.”