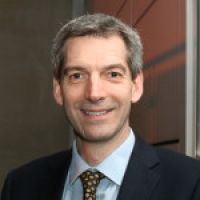 Six months have passed since major changes to the feed-in tariff (FiT) scheme, a legitimate time to assess performance. Our campaign with Friends of the Earth and 10:10 may have secured FiTs, but you didn’t need a crystal ball to foresee difficulties. Our hope is that ministers in the new Department of Business, Energy & Industrial Strategy will be concerned by the dramatic extent to which solar power has been marginalised here over the past year, just as it has grown to dominate renewables investment globally. While the department restructures we have been busy working with members on cost-effective proposals for the new ministers to help get the British industry back on track.

Reducing tariffs and introducing a capped scheme were intended by government to reduce the impact on consumer bills while still allowing for sustainable growth. Instead, despite warnings from across the industry, the quarterly deployment caps are creating uncertainty and have constrained it excessively, damaging investor confidence. In the domestic sector returns look too low to stimulate the market. Our recent industry survey with PwC showed this is costing very large numbers of jobs and forward confidence is poor. A weak industry means weakened ability to deploy cheaper solar in the future; this industry needs volume growth to drive down costs.

The caps for commercial rooftop in particular (>50kW band) are simply too low. We hit these caps in both Q1 and Q2, triggering two 10% degressions. We predict the same in each quarter going forwards for the rest of this year. That means the FiT will drop to negligible levels - close to half the original level - within a year. There is also little forward-clarity for investors or installers on what tariff they will receive. The result is severely constrained deployment and poor confidence in a market segment the government previously identified as a key area of growth.

Contrast the >50kW band with the <10kW and 10-50kW bands which are running at 35% and 40% of quarterly cap volumes respectively in the first half of this year. Evidence is pointing towards the tariffs being too low to allow for a healthy industry, as highlighted in our state of the industry survey report. Between these two bands, 65MW of spare capacity was rolled forward at the end of Q2. This equates to 40% of the entire FiT budget for solar going unused during the first half of the year.

Overall, since the changes to the FiT scheme in January there has been a 78% drop in the average quarterly deployment for <50kW compared to 2015. In other words, we are installing just a fifth of the rooftop solar we were last year. 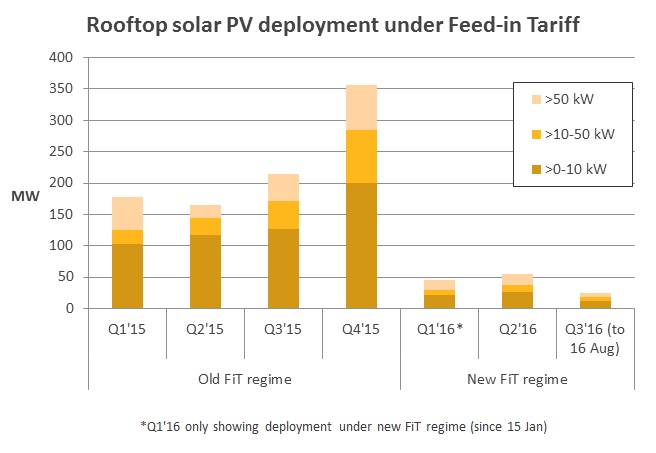 The sector is currently holding its breath on energy policy, with government in recess and the dust still settling in the post-Brexit political fallout. New ministers will need time to get up to speed before making any detailed policy decisions. We hope our series of policy asks will help inform the BEIS team, including this vital series of minor alterations to the FiT scheme. We believe a consultation in the autumn around these proposals would bring considerable benefit at minimal extra cost. 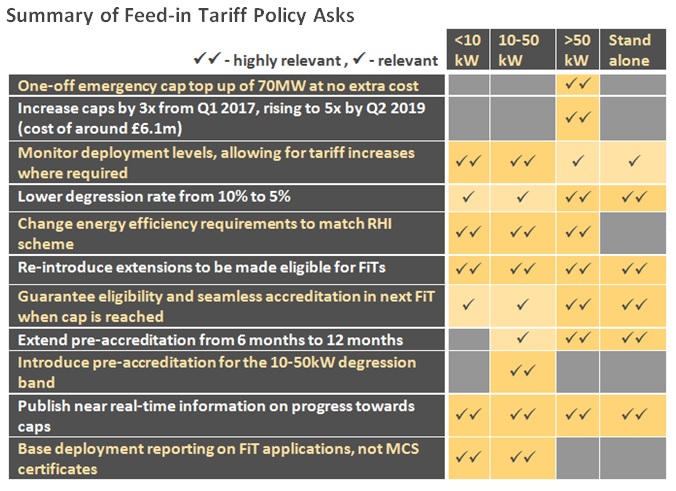 Our headline ask is to recycle the savings from the degression in the >50kW and standalone bands to be redistributed as a one-off emergency ‘top up’ to the >50kW band. This would allow an extra 70MW to be added at no additional spend beyond the existing projected solar budget. This six-monthly moving of underspend into solar was identified by DECC itself as a strategic option in its response to the FiT review consultation. The immediate boost in volume this would provide would mitigate further short term and damaging degressions while providing a much-needed shot in the arm for the market.

In addition, we are also strongly recommending the >50kW cap volume be increased from Q1 2017 onwards at a modest extra cost of £6.1m to 2019. This would allow an additional 480MW of capacity by 2019 – a significant capital investment of over £500m of installed rooftop solar. We are not proposing cap increases or decreases or transfer of underutilised volume from the <10kW or the 10-50kW bands, since these markets need to catch up and may require tariff adjustments.

Alongside providing further opportunities for growth in the commercial sector, it is vital that unnecessary barriers are removed to enable solar deployment at all scales. With a capped scheme, addressing barriers to increase growth won’t impact the total budget. Replacing the currently prohibitive EPC requirements with those required for renewable heat under the RHI scheme (loft insulation and cavity wall) would help the domestic market, as well as new build and commercial markets. Similarly, barriers were introduced to constrain the market which should now be removed e.g. allowing FiT extensions to be reintroduced for those with existing systems to increase their clean energy production.

The domestic sector is struggling, and it is likely that tariffs have been set too low. Evidence is growing that action will need to be taken and we are calling on government to monitor deployment levels in the smallest bands and be prepared to consider tariff increases where needed.

With other threats like business rates on the horizon, what’s needed is a strong message from new ministers reaffirming their commitment to a healthy solar industry in the UK. Our proposals would remove a string of unnecessary barriers to deployment, enabling the government to revitalise the sector for little cost beyond what has already been committed, and enable us to do what we do best: deliver clean, cheap and reliable electricity to customers.

The introduction to Solar Power Portal’s newsletter on 25 August 2016 incorrectly stated that the Solar Trade Association’s FiT reform proposals included a reallocation of unused capacity under the current regime. This is not the case, and all funds for extra commercial band originate from savings in the Levy Control Framework budget achieved through degressions in the >50kW and standalone bands. SPP would like to apologise for any confusion caused.