Often, with potential new solar markets, there can be a lot of hype and uncertainty regarding precisely how much deployment to expect and the timelines for this new capacity to come online. Within Europe today, we see this dynamic at play within one of the most exciting new countries for solar, the Republic of Ireland.

With a new subsidy for solar expected to be announced later this year, a 3GW pipeline of projects has built up over the past six months alone. To understand this fully, it makes sense to look at the overall energy sector in Ireland and to identify the role that solar can play in helping to meet its electricity demand and renewable energy targets.

At the end of 2015, the generating capacity of Ireland was approximately 10GW, made up of around 20% renewables/non-dispatchable generation, with over half of the electricity coming from gas.

In recent years, actual generation has been broadly in line with electricity demand which averaged 5GW in 2015 according to Ireland’s high voltage electricity grid operator, Eirgrid. So, it would be reasonable to ask: is there a need for extra generating capacity of any type, not just solar?

The answer to this question turns out to be ‘yes’, and there are two reasons for this; the country’s 2020 renewable energy targets, and changes in expected electricity demand and supply going forward.

Currently, due mainly to the country’s significant contributions coming from installed wind capacity, Ireland is already half way to meeting the 40% target. According to Eirgrid’s annual Generation Capacity Statement 2016-2025, total electricity demand is predicted to reach 30,681GWh in 2020. Therefore to achieve the 40% target, this means 12,272GWh would need to come from renewables in 2020. 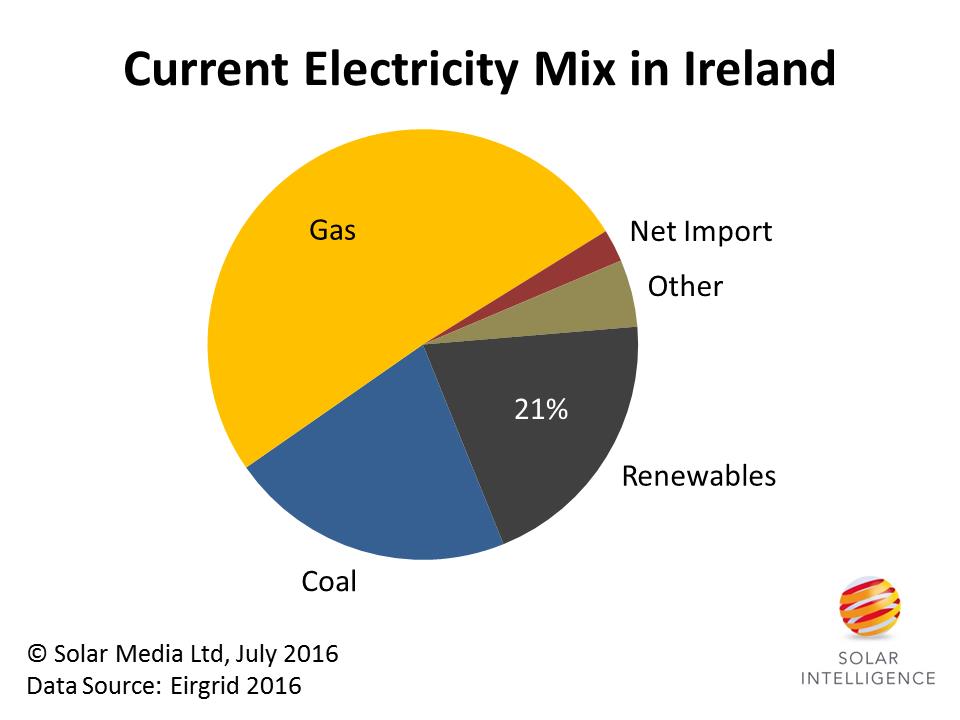 Today, the contribution from renewables in Ireland is approximately 21% of the overall energy mix, with this coming mostly from wind energy capacity installed.

With wind energy already generating approximately 6,000GWh per year in Ireland, additional contributions from new renewable energy will therefore need to double between now and 2020.

This additional renewable energy capacity could either come from an additional 2.35GW of wind or 6.4GW of solar, assuming load factors of 30% and 11% respectively. However, in reality, the extra renewable capacity will likely come from a combination of these two technologies.

Similar to the situation in the UK today, wind has become a difficult subject politically, with many objections to onshore wind and concerns regarding the slow pace of development for offshore wind projects. However, there is currently 3.5GW of wind projects contracted in Ireland, suggesting that there could still be a significant amount of new wind capacity coming online in the time period out to 2020.

Clearly, any shortfall from wind additions could easily be met by increasing solar capacity contributions, although no-one is expecting solar to account for the full 6,000GWh.

Either way, solar looks set to make a major contribution to the energy mix in Ireland as it already does now in many other countries across Europe, including the UK. Furthermore, some companies are already looking at the option of adding energy storage, which is expected to become financially viable when combined with renewable projects in the next few years. This would allow solar to better match demand and contribute to base-load generation requirements.

This leaves a clear opportunity for solar deployment in Ireland between 2017 and 2020. Solar has proved to be one of the cheapest and fastest deploying technologies globally in the past few years, and typically has strong public support. These factors will be important if solar is to contribute to Ireland’s renewable electricity by 2020.

Although Ireland’s supply currently matches demand for electricity, this is set to change in the next few years. Eirgrid predicts that electricity demand will increase by around 700MW in the next 10 years; this takes into account both reductions due to energy efficiency improvements and new demand.

The uptick is largely due to new data-centres that have been approved in Ireland which require a lot of electricity to operate. The increase of 700MW is actually the median case, and assumes all contracted data-centres are built over the period, but this could increase if further data-centres are approved; there is currently over 1GW of enquiries pending.

The development of a solar market in Ireland also fits well with industry trends currently being seen across Europe. Subsidies continue to be reduced, especially in markets which have already seen large amounts of solar deployed.

This is most obvious today within the UK, which has been the leading solar market in Europe for the past few years, with the final round of Renewable Obligation Certificate (ROC) accredited projects due to be completed by 31 March 2017.

Solar related companies across Europe are desperately looking for new solar development opportunities to compensate for the downturn in demand from countries such as the UK. On the plus side however, supply chains are already in place and many EPC-based companies have the expertise to deploy solar quickly if called upon to build solar farms in Ireland.

In addition, component suppliers (modules, inverters, mounting) have established strong UK-based sales and marketing teams and are ideally placed to make the move now from the UK to Ireland, so long as they can reach out to the correct developers and understand their business models for the Irish market.

Furthermore, the current favourable exchange rate for Euros means that Ireland could, in the near term, benefit from companies that no longer see the UK as attractive both from investor-confidence and exchange-rate hedging.

As has been seen across the world during the past two decades, solar is easily scalable and can be deployed very quickly given the right conditions, ultimately providing a great opportunity for Ireland in meeting renewable energy targets and developing low carbon generation.

To help companies navigate the emerging solar market opportunity set to emerge in Ireland, Solar Media has been realigning its in-house resources over the past 12 months, to make sure that our media coverage, events schedule and market research reports are providing the industry with the same quality and quantity of market knowledge in Ireland that we currently offer for the UK solar industry.

Bookmark 15-17 November 2016 to attend the inaugural annual solar PV event for Ireland, Solar PV Ireland in Dublin, and meet all the key stakeholders that will shape the country’s solar PV growth phase from 2017 onwards.

We are also holding a free webinar this week on the solar opportunities in the UK and Ireland, on Thursday 28 July at 11am. Details on how to register for the webinar can be found here.