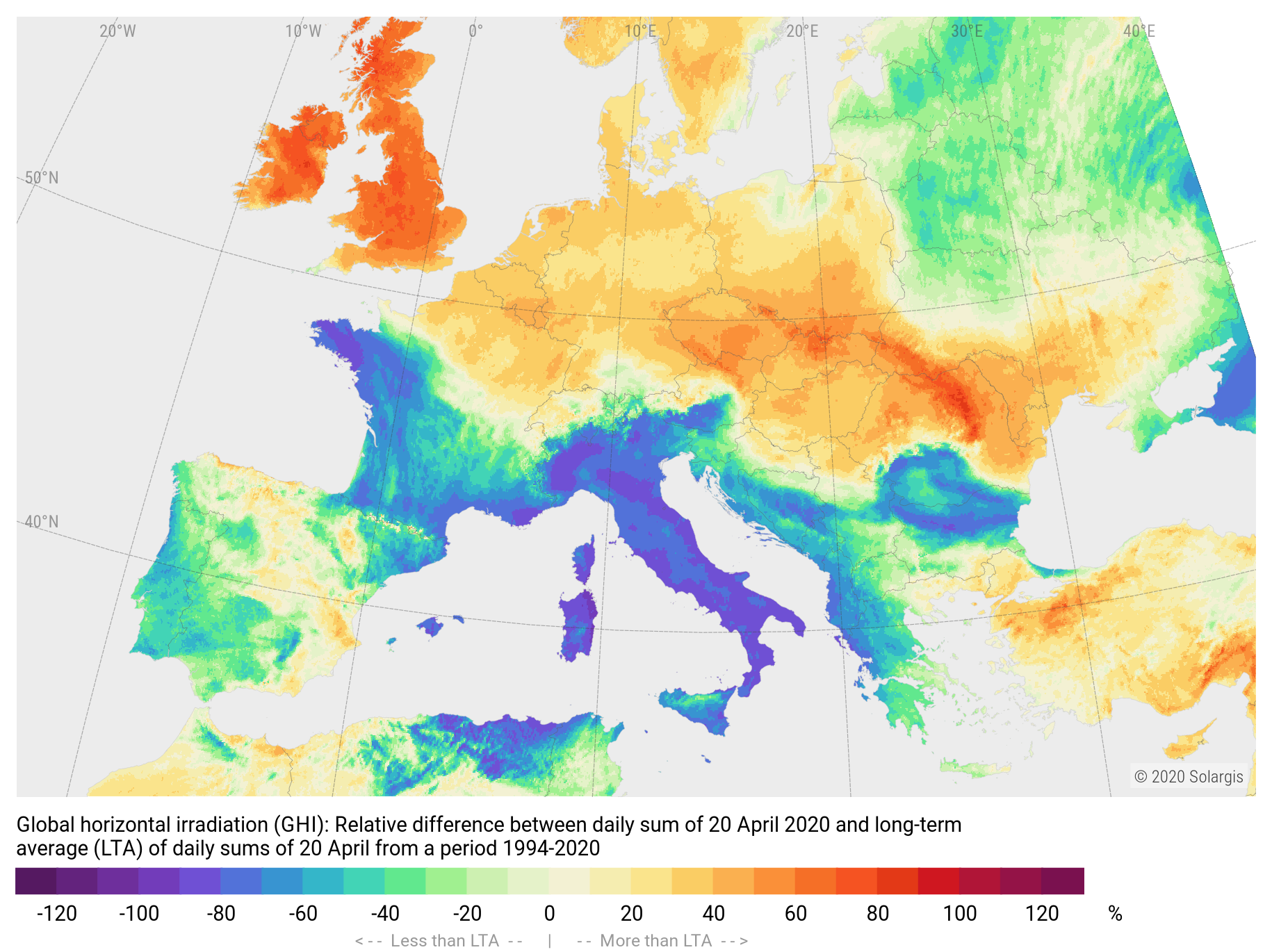 Solar irradiation in the south of England in May was as much as 50% higher than normal, according to new research by Solargis.

It forms just one of a number of records that have been smashed so far in 2020, with the trend likely to continue according to the data and software architects. Such performance is being driven by a number of factors, including changes in global horizontal irradiation (GHI), low power demand, increased capacity and lower air pollution.

The opportunity to assess the risk of future curtailment and price cannibalisation that such records present must be taken now to ensure new solar capacity can be smoothly integrated into the grids of the UK and Europe, Solargid said.

Monday 20 April 2020 was among the sunniest April days since records began in the UK 27 years ago. GHI levels were 70% higher than average on this day, allowing the UK to set a peak production record of 9.68GW, amounting to about 30% of the country’s energy mix.

“The current situation has handed national grids, policymakers and the solar industry a valuable opportunity to understand how this volume of renewable generation can be managed in future, when renewables are set to make up a much greater part of the energy mix,” said Marcel Suri, managing director, Solargis.

“Most markets work on a target of 50% renewables by 2030 – but many are approaching this already because of the combination of low demand during the lockdown and favourable weather.”

National Grid ESO has had to rely on a series of tools to balance the grid as renewable energy has surged in recent months and demand has remained low due to the COVID-19 lockdown.

This includes using the newly implemented Downward Flexibility Management service to reduce embedded generation and the signing of a deal with EDF to reduce the output of its Sizewell B nuclear power station.

Following this, balancing costs are expected to jump ~£500 million as National Grid ESO works to avoid outages in what’s been referred to as a ‘glimpse of the future’.

“As the proportion of renewables in the European grid increases and we shift into a post-subsidy environment, accurate forecasting becomes increasingly essential for the operation of solar projects,” Suri added. “During this lockdown, the energy industry will have a greater opportunity to witness what curtailment and price cannibalisation look like in practice, and we anticipate that this will drive investment in more sophisticated forecasting and grid management approaches.”

The surging solar has allowed the UK to run without coal for more than two months, in what was hailed as a historic milestone for the decarbonisation of the grid.

Shifting climate patterns – which have led to May setting a new record as the sunniest month on record with 266 hours of sunshine – may impact the reliability of long-term resource estimates however, warns Solargis.

Data must be up to date, readily available and include an appropriate level of granularity going forward to ensure solar can meet its full potential.

Suri continued: “Reducing risk is a key part of maximising profitability throughout the lifecycle of a solar project, from the earliest pre-feasibility studies to accurate forecasting of returns during long-term operations. As a 1% reduction in resource risk can increase return on equity by approximately 4% for the investor, it is critical that solar asset owners can use the most accurate data to underpin their long-term strategies.”

The Solar Trade Association has called on the government to spur on solar development in the UK further in coming years, by committing to a target of 40GW by 2030.