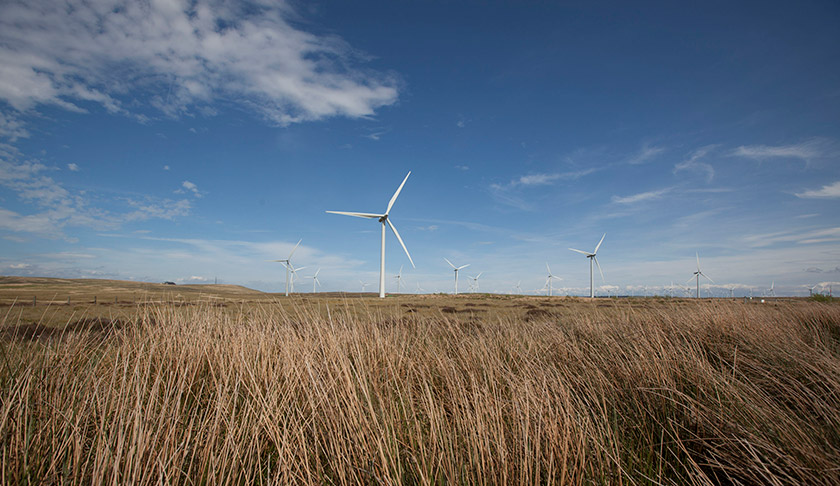 ScottishPower has submitted a planning application for up to 40MW of solar, along with up to 50MW of battery storage and a 20MW electrolyser as part of its Green Hydrogen for Scotland project.

The electrolyser will be the largest in the UK according to the company, and generate 8 tonnes of green hydrogen a day at a site 5km west of Lochgoin Reservoir and adjacent to the existing Whitelee Extension substation.

It will be powered by a combination of the solar farm, which will be made up of 62,000 individual solar cells, and ScottishPower’s Whitelee windfarm.

Green Hydrogen for Scotland is being developed by ScottishPower in partnership with specialist gas provider BOC and electrolyser manufacturer ITM Power, and is aiming to commercially supply hydrogen before 2030.

Barry Carruthers, ScottishPower’s hydrogen director, said that as eyes turn to Glasgow ahead of the COP26 summer this year, “it’s fantastic to be making this next important step towards delivering green hydrogen for Glasgow".

“Whitelee keeps breaking barriers, first the UK’s largest onshore windfarm, and soon to be home to the UK’s largest electrolyser. The site has played a vital role in helping the UK to decarbonise and we look forward to delivering another vital form of zero carbon energy generation at the site to help Glasgow and Scotland achieve their net zero goals.”

Green hydrogen will be used by difficult to decarbonise industries, as a zero carbon fuel to help lower emissions. It forms a key part of much of the government’s decarbonisation strategy, with a  £171 million Industrial Decarbonisation Fund focused on green hydrogen and CCS announced in March.

Funding is going to nine projects around the UK, like the South Wales Industrial Cluster, where Lightsource bp is to provide solar power and battery storage to generate green hydrogen to fuel steel and other industry in the region.

Green Hydrogen for Scotland – which was first announced back in September – is expected to play a key part in Glasgow reaching its net zero targets, and in particular help it to create a zero emissions vehicle fleet, relying on electric and hydrogen-powered vehicles by the end of 2029.

Mark Griffin, hydrogen market development manager for clean fuels at BOC said the scale of the project highlighted the growing demand for clean hydrogen, adding that the company was “delighted to bring our hydrogen mobility and refuelling project expertise to help deliver a ground-breaking facility in Glasgow".

“Green hydrogen has a vital role to play in Scotland and the wider UK’s journey to net zero emissions providing a sustainable energy source that can provide clean, renewable energy for industries, heavy transport and companies for decades to come.”

ScottishPower is expecting a decision on the planning application this autumn.