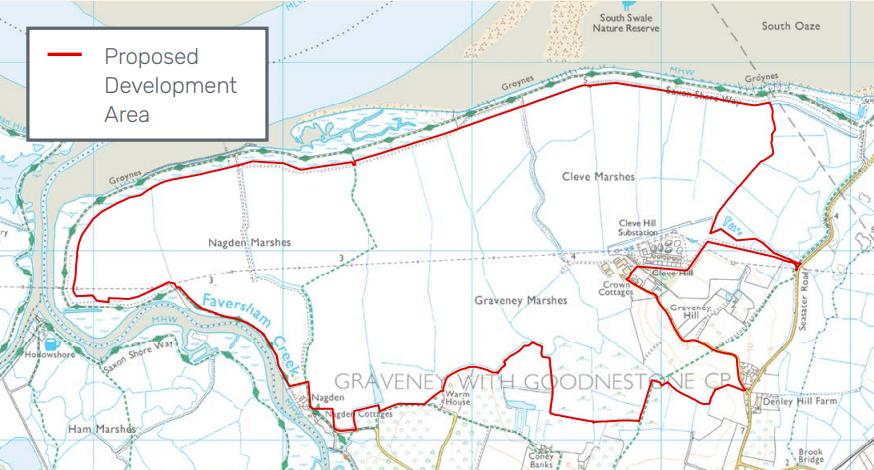 The planning inspectorate has submitted its recommendations for the controversial Cleve Hill Solar Park, which is set to be Britain’s biggest solar farm.

The Recommendation Report to the Secretary of State for the Department of Business, Energy and Industrial Strategy (BEIS) was submitted last week (28 February 2020), and the Secretary will now have three months to consult on the project before delivering a decision.

Cleve Hill Solar Park is the first in the UK to be classed as a Nationally Significant Infrastructure Project, due to its capacity, which will exceed 50MW. When constructed it will be able to power over 91,000 homes, according to Hive Energy and Wirsol who are developing the project through a joint venture.

The £450 million project is due to be constructed on a site one mile northeast of Faversham, in Kent, situated close to the village of Graveney. The farm will include 880,000 panels along with battery storage, and the site has already been granted a grid connection capacity of 350MW for both import and export.

However, the site has faced opposition, with a sustained campaign against the development of the site spearheaded by the MP for Faversham and Mid Kent, Helen Whately.

“I’m worried that plans for a solar farm will cover Graveney marshes, harming wildlife and changing the landscape beyond recognition,” she said in a statement. “Though the developer has listened to concerns and reduced the scale, it’s still huge.

“Solar energy is important for a sustainable, green future – but this is just massive. With 880,000 panels, it will industrialise swathes of open countryside. This beautiful, eerie landscape loved by walkers might never be the same again.”

According to an article in Kent Online, protestors are said to be nervously awaiting the decision from the Secretary of State, saying it is “too close to call”.

The project was first announced in 2017, and the Development Consent Order for the site was submitted in 2018.

As mentioned by MP Whately, the scale of the project was reduced in 2018 following the second round of consultations, in an effort to compromise with protestors.

The farm will also bring in environmental mitigation practices, and create a dedicated Habitat Management Area of 138 acres. This is proposed for bird species including Lapwing, Brent Goose, Golden Plover and Marsh Harrier.

It bares resemblance to a 500MW solar-plus-storage site also under development in the UK, a project which will also be classified as a Nationally Significant Infrastructure Project. However, construction of this site - the Sunnica Energy Farm - isn't expected until 2022, with generation set to begin in 2025.