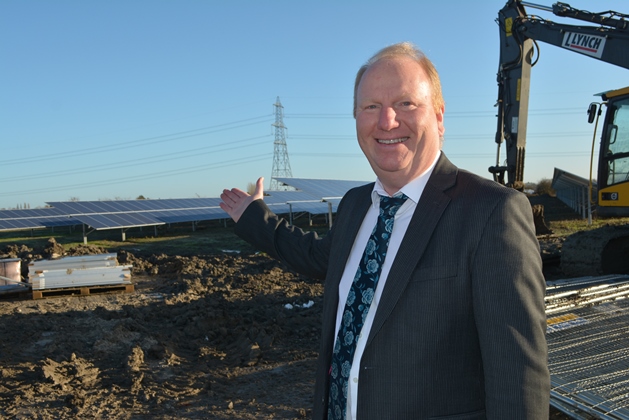 The second and last remaining solar farm to receive Contracts for Difference (CfD) funding under the initial auction has been connected to the grid.

Cambridgeshire County Council’s 10MW Triangle Solar Farm in Soham began generating in the week before Christmas after a difficult year of delays and spiralling costs.

The project originally had a target commissioning date of 1 July 2016 but the council was forced to negotiate an extended deadline with the Low Carbon Contracts Company after struggling to gain grid access, and then saw costs spiral by £500,000 owing to the pound’s drop in value following the Brexit vote.

Cambridge County Council’s CFO Chris Malyon told Solar Power Portal in September that the added costs had impacted on the project’s margins, but said: “Although it reduces the overall level of return on the project, it's still above the baseline which members set for 7%, which is the level of return we require.”

The council has claimed an expected income of £1 million per year from the site, which will remain in operation for at least 25 years.

Councillor Steve Count, chair of Cambridge County Council’s general purpose committee, said: “When I talk to our communities they are rightly keen that we spend our money wisely and by finding a way to create income, these extra millions can be spent on much used frontline services.

“This County Council project is a great investment as it means we are producing renewable energy and income while reducing the need to either make cuts or ask our residents to make up through taxes. But this is just one example of what we are doing at to make the best use of our assets.

“For example through the Moblising Local Energy Investment project we have a commitment to invest £28 million in similar projects that help make schools and other public buildings more energy efficient. This is not restricted to solar energy, for example we’ve installed new boilers in schools, retrofitted insulation and we are developing a Smart Energy Grid Project for St Ives Park and Ride projects which proposes using battery storage technology and will be the first of its kind at this scale in the country.”

Triangle Farm was one of five solar projects to be successful in the first CfD auction in February 2015 but joins Lightsource’s Charity Farm as the only two to complete. Two were cancelled almost immediately following the auction after being submitted at unviable strike prices of £50/MWh and a third – Netley Landfill Solar Park – had its CfD terminated in March last year. REG Power Management, the Netley site’s owner, has indicated that it intends to develop the project under new financing.

Both successful CfD projects were agreed at strike prices of £79.23/MWh.